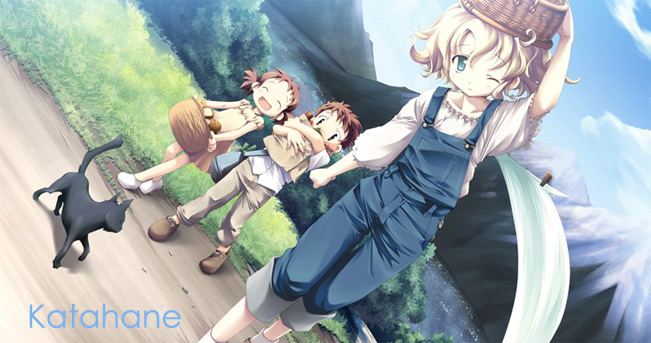 Game Summary: The story takes place in a world with 3 kingdoms, the Red, White, and Blue Kingdom. In this world, they have highly-advanced dolls with some closely resembling humans. These dolls occasionally need maintenance which is done by a ”tuner”.

A young playwright named Wakaba writes a controversial play about a traitor named Ein who killed a ruler of the White Kingdom, Christina. In Wakaba’s play, she presumes that Ein did not betray Christina, but was actually her loyal supporter.

When Wakaba’s friend Cero needs to make a trip to get Coco, a doll that lives with him, maintenance, Wakaba and her brother Light travel with him. Wakaba travels in the hopes of finding some actors for her play. Along the way, they meet a beautiful doll with one wing named Belle and an aspiring actress named Angelina.

The story takes place in 2 parts:
1) Shirohane – the main story with Wakaba and gang
2) Kurohane – the historical events talking about the end of the reign of Christina