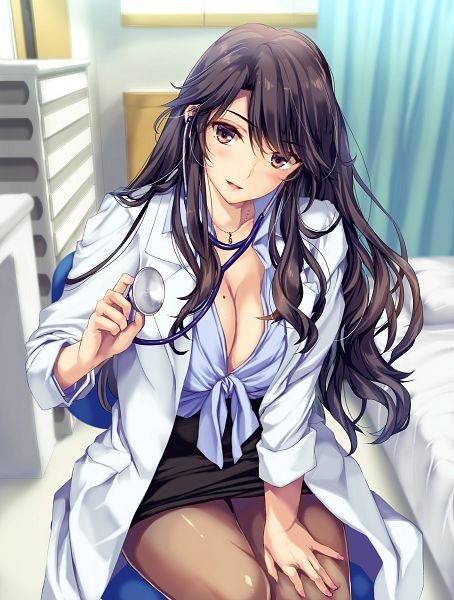 Boku to Joi no Shinsatsu Nisshi, or the way less fantastic and cringe English name The medical examination diary: the exciting days of me and my senpai, is an nukige by Prekano that was released in 2019 and localized by iMel Inc. in May 2022. Despite technically being a sequel to Boku to Nurse no Kenshuu Nisshi, it’s more that both entries complement each other and readers can enjoy reading whichever one first.

Now to the story, and what I would call a great story despite being a short kinetic novel. The main problem with the majority of nukige on the market today is the lack of story. Where Boku to Joi stands out is through its balance of good story and good h-scenes. Despite Ryou acting as a sexual temptress for the protagonist Takuya, you get a serious amount of depth into both of their characters. For example, Ryou’s life isn’t so easy as her uncle is in charge of the hospital and Ryou constantly feels pressure from said uncle. 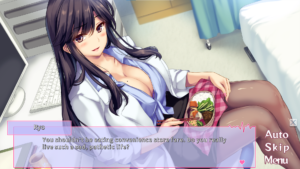 There’s also a surprising amount of detail about life working at a hospital. Whether it be interactions with patients or the details about procedures, it really adds the sense that the setting isn’t just for show.

Personally, the OST is by far my favorite part of this whole experience.

The best way I can summarize my thoughts on the soundtrack is that it uses simple motifs but doesn’t suffer from timbre repetition. For example, the first track “call” is a good introduction piece that not only sets a cheerful tone of the scene with its pleasant piano but also for the rest of the OST. The third track “Pulse” mixes things up by adding a string part to the original song as well as a pulsing beat. The track right after is somewhat uneasy and is one of a few great contrast pieces that are not harsh but more somber. The final two tracks I want to mention is “allegro” which is a chirpy but smooth piece that is just so catchy even with no vocal part. Finally “inqueito” is the most unnerving track that works perfectly as the finale before the end. Overall, if you’re looking to get into nukige without a lot of commitment this is easily one of the best short and sweet VNs. Considering the characters or the production behind it, I personally can recommend this to anyone.