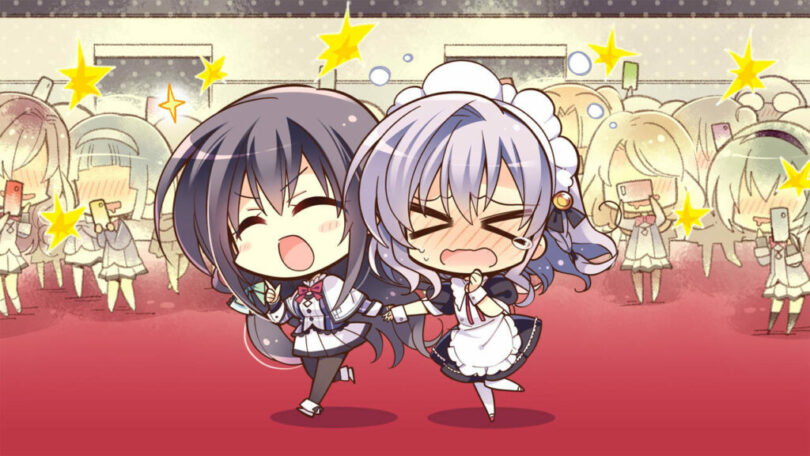 Welcome to the Fuwanovel VNTS, where we shamelessly copy the work of one illustrious 4chan /jp/ member in collating translation progress and add minor dabs of value through corrections and additions. Entries with updates this week in bold. The cover for this week is from Otome Domain, the crossdressing moege released this week by Shiravune. Why is this out late on Thursday? Because we both forgot about it. Oops. It IS sort of the season, to be fair. Hata gave up, so it’s actually me getting the actual post out now too. Anyway, onto the updates:

「Hi fellow nerds and reprobates and Gödel incompleteness folks (and maybe some of you are decent people though I hope not). There is no particular excuse for this week other than we forgot about it, so we’re going to say it’s madokami’s fault. On the up, my minecraft world has progressed nicely and I just got villagers near my world spawn so I can try making an iron farm. I’m kind of amazed how they can wander off to be honest. At their own damn house they trapped BOTH themselves in pits they couldn’t jump out of MORE THAN ONCE. Also on the up, RTAinJapan is currently still streaming pog. Though the current runner is a hecking american and wow the accent is so fucking strong lol. At least the commentator is a woman with a pleasant voice. Need her commentating my life ngl. Personally I’d just be saying my run was terrible ad nauseum. 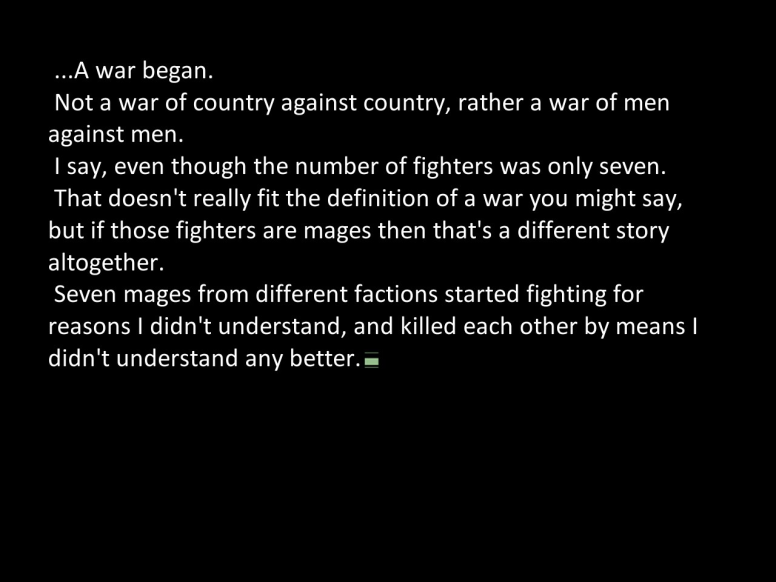 Last week we were rip, so I posted my commentary to my forum blog. It contains my remarks on the new fate/stay retranslation patch covering UBW, which you might want to read. Tl;dr it’s not very good because it sticks to the Japanese sentence structure way too much, and the difference between it and the old tl feels kind of like hoshimemo fantl vs hoshimemo official where it’s just a sad story of there being no good options.

MAGES is broke, or something. But who MAGES? (who actually end their name with a period but FUCK that). Well, among other things like part of KID’s Memories Off series, MAGES was publishing the Science Adventure series — you may know of Steins;Gate and Chaos;Child, but there are more. Some of them might even be worth reading, though don’t quote me on that. They were actually reaching out to the west, though generally their localizations were lazy, buggy, and badly written. I imagine sciadv fans will be sad if Anynomous;Code doesn’t come out, but I personally feel a lot of ambivalence here. Probably they’ll get acquired by some big conglomerate who will make even worse localizations, because that’s just how it goes. Knowing about translation is hell. 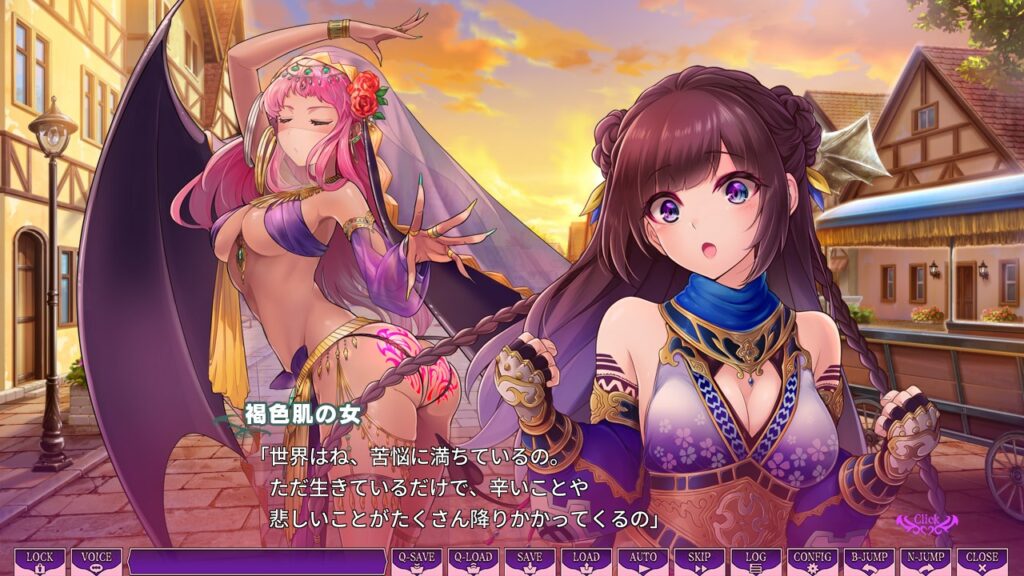 “You see, the world is full of suffering. Hardship and sorrow comes to everyone, just for living their lives.” – Zaka tl ™

A translation for an obscure game I was tipped off on by my word autism bro Funneriffic and read half of, missing the best part according to him? That’s right, it’s Sakyuseka. For an indie VN, it’s got some realdeal graphics and full voicing for everyone except the one that matters (the protagonist) so basically it sucks /s. The marketing by Medibang is very coomer, and the VN can be that way if you want to, but the plotline where you actually resist temptation and don’t just bad end yourself constantly is more of a touching fantasy story with a decent amount of chuu2. As an osananajimi enjoyer: good ge tbh. I can’t comment on the translation with any detail because all the screenshots are just standard coomer lines rather than anything interesting. Honestly it probably won’t matter that much if it’s not ideal. Grumble.

Plastic Memories the console VN got a translation. I think this is one of those KEY-ish stories I mostly don’t read anymore because I’m a wreck and don’t actually read? I’m sure someone wants this. Though console tie-ins are usually kind of sus.

The Hoshimemo re-retranslation got a progress note today. Maybe it will be out before 2026 and then I’ll lose the ability to just refer to the “two hoshimemo translations” as a comparison point. The world has it out for me ngl.

Otome Domain is out. Honestly when I looked at the CGs for this I was saddened by the lack of girls peeing themselves since a certain person mentioned this as a major element and it just isn’t depicted that much. Weird people without my correct sexual preference might instead be relieved instead, I suppose. Smh. 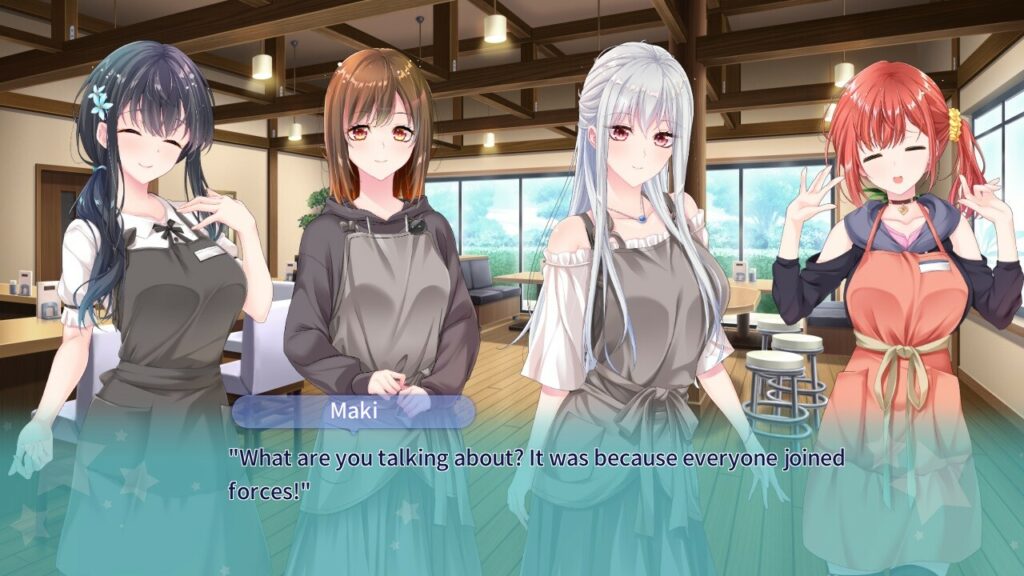 A Maiden Astrologer Divines The Future is Switch-only for now, with a PC release slated for 25 January. This wasn’t on my radar, but I think another thing about it is more interesting: the description. You can see very clearly how it was just translated straight from the Japanese, with no thought given to how you write a compelling description in English.On one hand, surprisingly a truly 500 IQ move is often taken by localizers where the translator doesn’t even write the translated description. On the other, still not a good sign. On the gripping, I’ve known translators to say that they translate literally because otherwise the Japanese side gets on their arse because IT DOESN’T SAY THE EXACT SAME THING WHEN I MACHINE TRANSLATE IT TO JAPANESE REE CHANGE IT TO BE BAD SO I CAN READ IT WITH DEEPL. I really, really, really wish I was kidding. I’m not. Knowing about translation is hell.」