Welcome to the Fuwanovel VNTS, where we shamelessly copy the work of one illustrious 4chan /jp/ member in collating translation progress and add minor dabs of value through corrections and additions. Entries with updates this week in bold. The cover for this week can only be Mahotsukai no Yoru (Witch on the Holy Night) which has already surpassed more than 100000 sold copies as I’m writing this. There are also some other interesting titles and projects which made progress this week. A beloved game series also is now available in more stores, too, but more later…

Fuwanovel itself is doing great lately. We finally broke through the last login credential roadblocks since Tay, our Archmage, finally appeared from behind the scenes and gave us access to all Keys of the Kingdom. This has greatly contributed to team motivation and now we’re working really hard to make Fuwanovel amazing. Life is a busy road, but Fuwanovel will be a sprawling town square soon – we promise this. Without further ado, let’s see what’s new this week.

Age titles
Kiminozo – “We will have more information on this title at a later date. Please look forward to it.”
Schwarzesmarken – Through Greenlight

「’lo folks. Hata has said that if I write this today, Tuesday, he will get VNTS out today. I’m giving it a 50% probability. There’s really only one release of note this week, but it’s big: Mahoyo. This marks the first ever official English release of a Type-Moon visual novel without gameplay elements. TM has always felt out of reach; rumors of them requesting absurd licensing fees of VN localizing companies (potentially meant as a polite rejection) abound. In a sense it still is, as the localizer recently has been Aniplex, not one of the usual VN companies. I can’t say Aniplex has a reputation for amazing translation quality, but who knows? I really only remember that the romanization scheme for names was wack in the demo. (It’s still wack ~ Hata) If I seem less than engaged with this new release, there is indeed a reason: it is by questionable pretext (“just wanted people to see it on the big screen” — let’s just say we all suspect it’s an anti-piracy attempt) a console-only release. While I finally have better hardware coming in to supplement my current rather mid laptop, the annoyances of emulation cannot be ignored, especially in a VN with as strong a visual presentation as Mahoyo.

The other reason is that uni is currently demanding I actually do work and I absolutely hate it. Ree. 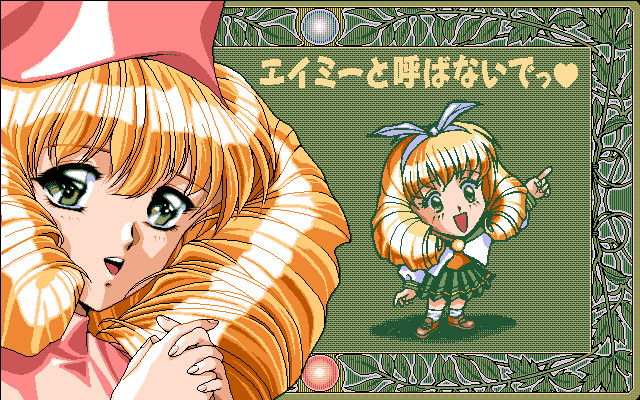 We do have a few things other than the T-M news to note. First of all, the Eimmy to Yobanaide up there is Himeya Soft’s old Amy’s Fantasies translation, ported to PC-98. If you will, from Windows 98 to PC-98, lol. Apart from this interesting switch (maybe the PC-98 version is better? idk), some extra material has been translated, the translation has been corrected, and some mosaics have been removed (hi Mark!). The translation work is by the same BabaJeanmel lad that has been doing the other PC-98-related translation recently. An interesting man, for sure, though I can’t say I personally have much interest in his brand of retro.

Oppai no Ouja is now officially version one-point-oh released or something. I wrote about it in an earlier VNTS when an early access (Kappa) version was released. 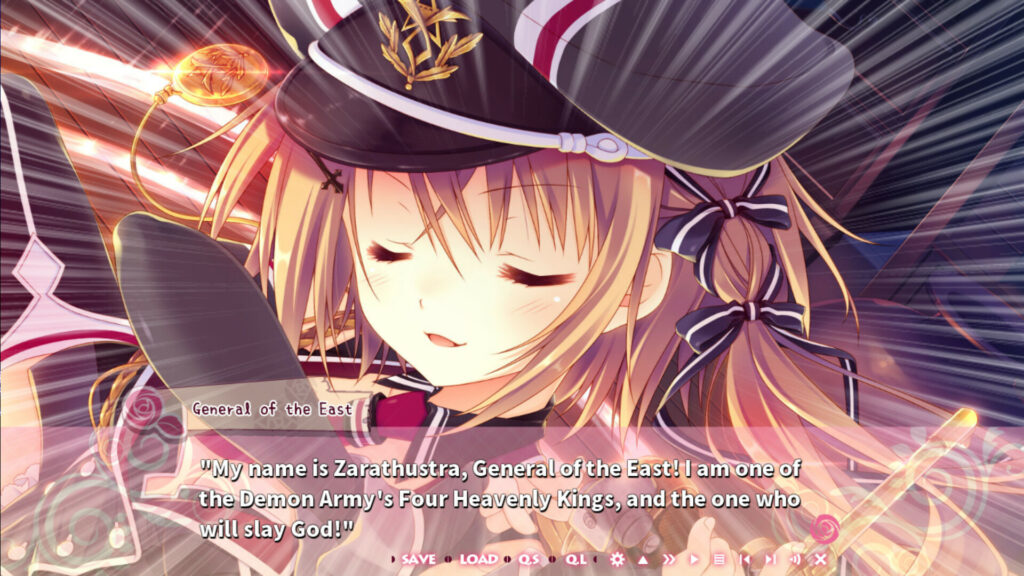 Finally, Otome Domain has been announced for a 22 December release. This is a specimen of the fascinating Japanese genre of crossdressing VNs where the protagonist, in drag, is quite plausibly the cutest heroine on the screen at any specific time. One of the bonuses of this is that the protagonist is usually voiced. I do think this genre can be quite fun (Charabration’s common route is quite entertaining), but I’m not sure if Otome Domain is quite in my strike zone. Needs more drama and despair ngl.

Oh, make sure not to mistake it for the TS genre where the protagonist is actually flawlessly sex swapped to a girl. Totally different! And totally poggers, of course. Ahem.」 Yo Hata, it’s your birthday. We gon’ party like it’s your birthday… yeah, indeed. I’m turning older. 27 to be exact. So since I don’t have any friends who would want to celebrate my birthday when its snowing outside (and I frankly can’t go outside, because I have an actual work day tomorrow) I’m using my last four hours before timely going to bed to prepare the VNTS post. During the last weeks those have been released quite late–unfortunately for both mental fatigue reasons, but also issues with the backend management of Fuwanovel. The biggest issue was ArchmageTay’s extended absence while still unknowingly holding on to some of the private keys necessary to modernize this Kingdom. Well, all these issues have been solved quite recently, so we’re now going forward kickdown full throttle back to the future!

Okay, so obviously I can’t get around talking about Mahoyo. Let me make a confession! With exception of the Fate Route in FSN I never played any Nasuverse game. I completely steered clear of them because I know they are amazingly good and I would simply need several days of rainy weather to binge one… well, this was before we started with Fuwanovel because this endeavour has easily turned out to resemble full-time employment. Either way, when I find the time I will play this for sure. Maybe I even grab the PS4 version because I need to play this on “le big screen”. Qualitywise, there is dazzling artwork and animation quality to expect from this game, paired with a killer soundtrack. Really, you can’t go wrong with this game and I wanna play it asap.

I actually stumbled across BabaJeanmel many years ago, when I was writing about the YU-NO Translation port on PC-98-able hardware over on our German site and since then I’ve been following this guy and his releases closely. I actually also invited him to work on a PC-98 related project which our friends over at RWA (those in the know) are championing. He’s going to help us test the performance of some PC-98 titles to present. Before we can actually work on this tho, it might take a month because Fuwanovel already requires a bunch of resources… Either way, looking forward to what the Frenchman got to offer in the future. We told him to create a thread on Fuwanovel to keep us all up-to-date on his newest drops. We will look after him.

Apparently, Tokyo Hero Project is finished translating and the translator is the Master of JList himself, Peter Payne. Given Peter’s English has deteriorated quite a lot when we consider the state Starless: Nymphomaniac’s Paradise was in many years ago, this could be worrisome. However, this game is probably more simple to translate and reading his blogs he can nail comedy on the head. I’m not 100% convinced this will be a top release, but many people will love it. Onigokko and its fandisc had its fanbase, too.

Rance is coming to JAST!
Four fan-favorite titles from @Alicesoft_en and @MangaGamer, coming December 20th!
Available for Pre-Order now, 20% OFF!

Speaking of JAST USA, their workaholic project manager Seryuu keeps posting [Official Announcements] on our forums. One of them was that not only selected Alicesoft titles, but also ALL of the Rance series will be available now in the JAST USA Store. The little demon loli sneakily avoided mentioning that they’re also available at FAKKU, Kagura Games and GoG, too! So yeah, MangaGamer isn’t the only bearer of Rance titles anymore. This will propel the sales for these games in unexpected heights. I’m sure of it. There is NO SINGLE EXCUSE anymore to not immediately play Rance (besides not liking the game and what its antihero stands for) yeah, that might be valid as well, idk.」