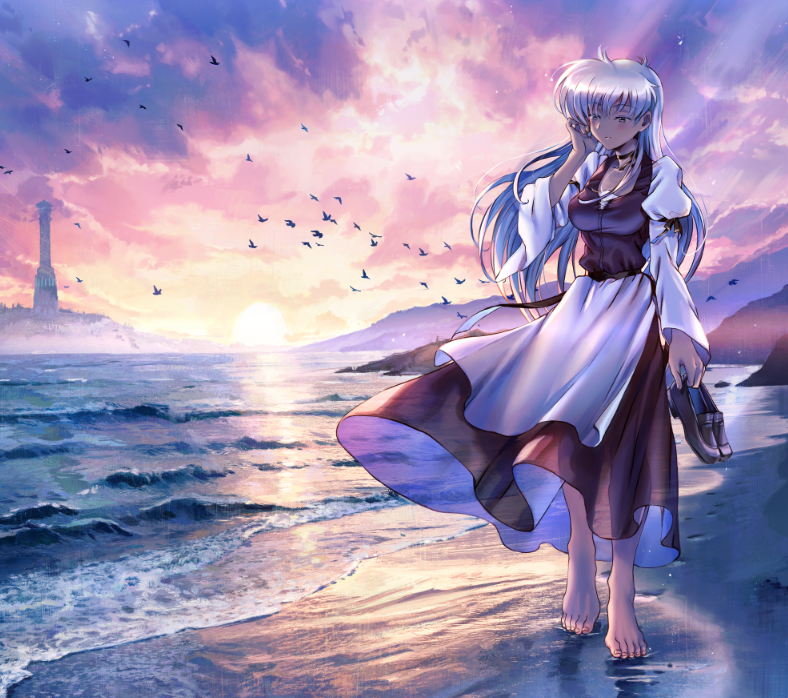 Today I am tackling something I usually don’t tackle… and that, my friends, is an EVN by the rather new start-up company envelope.

This is Queen Beast, a relatively short yet impactful VN written by fom and illustrated absolutely beautifully by Scribbler. The game revolves around an 18-year-old miller named Otto who is soon dragged into the world of violence, knights, magic, hot nymph women, romance, and espionage in his aim to rescue his sister from the clutches of the evil “Black Knight”. 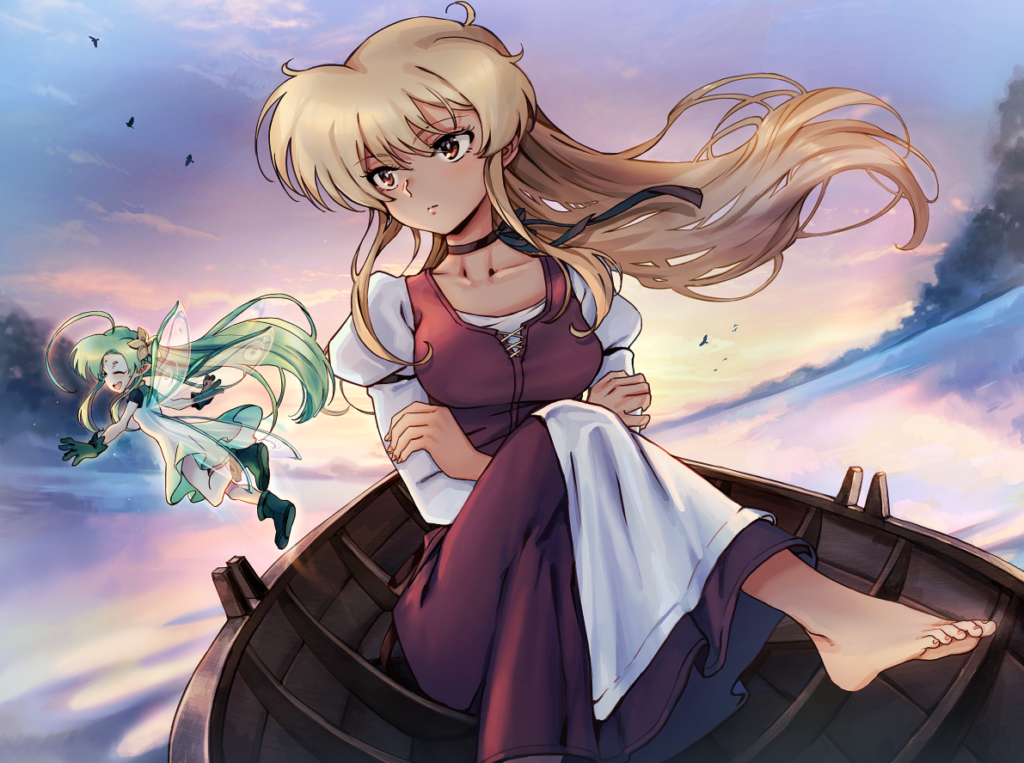 The story begins with Otto being booted from the village he lives in by the chief in order to find his sister. The story is divided into 5 chapters, most of which are humorous and light-hearted with the occasional deep moment or romantic scene, though it genuinely does get dark at times.

Chapter 1 mainly revolves around Otto meeting a girl named Switch, who is illustrated akin to how Urushihara Satoshi used to draw characters. Switch is a rather stuck-up adventurer with no filter in between her brain and mouth and tends to blurt out disheartening comments at any moment, teasing Otto whenever he makes mistakes. 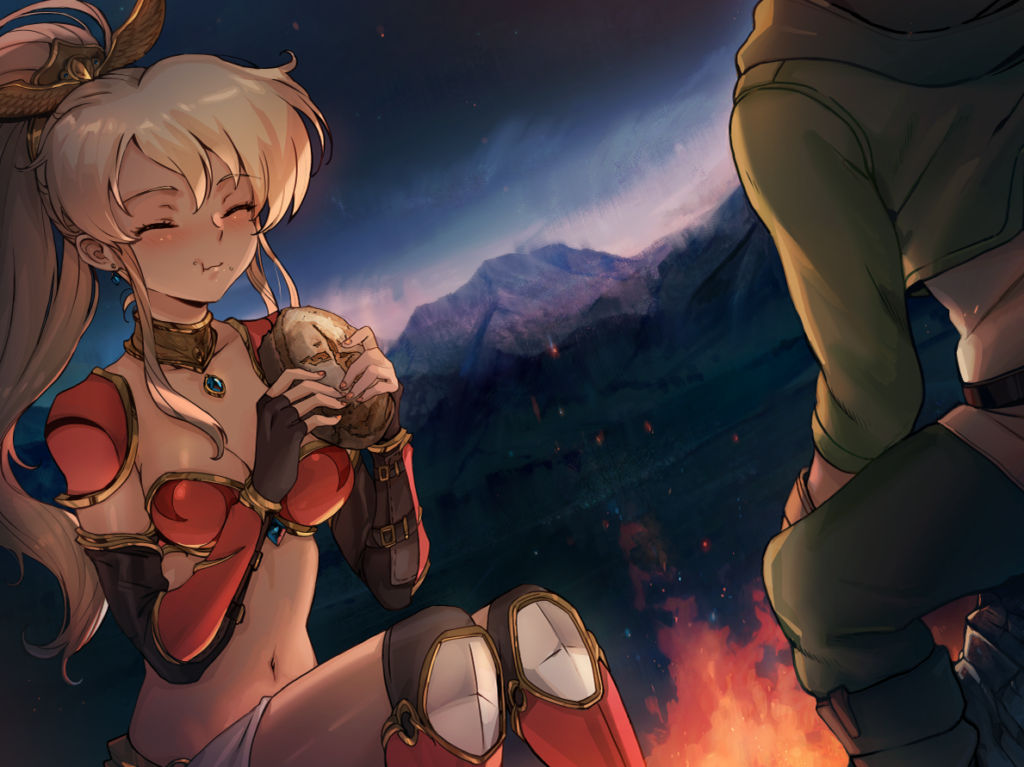 Chapter 2 involves Otto and Switch adventuring through a forbidden forest and battling a nymph who Otto coins “Echo” and who ends up joining their team. I enjoy the silly banter Echo joining the crew provides as it makes the group feel a lot more like a rag-tag group of adventurers.

Chapter 3 is about Otto, Switch, and Echo arriving at the big city, the capital of the kingdom they reside in. As Otto attempts to visit brothels, we get to see the perspective of Otto’s kidnapped sister Bronwyn in the clutches of the Black Knight’s tower. We also find out the reason the Black Knight kidnapped Bronwyn, as the Black Knight is actually a cute alcoholic lesbian wishing to create a lesbian harem of girls with big boobs.

The latter part of chapter 3 involves Otto, Echo, and Switch meeting a wandering pimp (who also happens to be an inside man of the Black Knight’s tower) named Faber. Otto creates a plan with Echo to liberate his sister from the dark clutches of the harem tower and ends up encountering the Black Knight herself (or, well, Switch does, Otto just kind of watches). 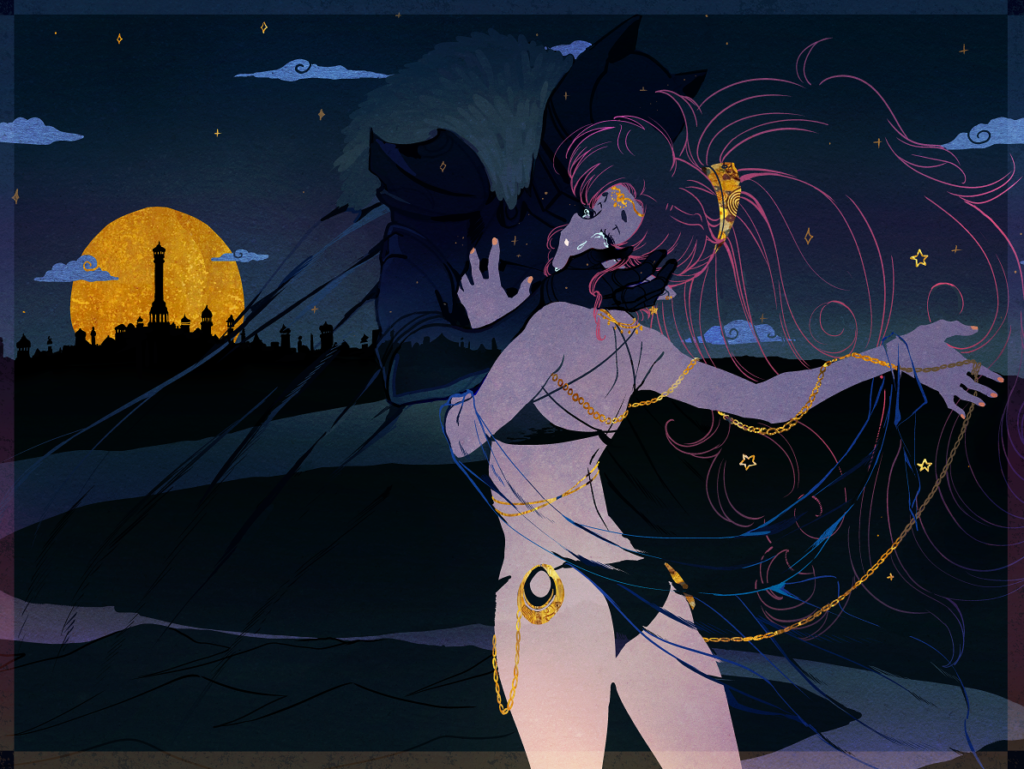 The next part of the game, chapter 4, turns drastically dark. Otto and Switch are locked in the Black Knight’s dungeon and, in their pursuit to escape, encounter mournful living corpses of people ever so slightly cold to the touch but whose hearts still beat fervently. They meet a man who has carved a statue of a woman in order to dispel his loneliness but who, after being talked, promptly attempts suicide in front of them, cutting his stomach open and letting his entrails pour out.

Personally, the dark moments came out of nowhere as much of the story had been relatively light-hearted humorous (and slightly sensual), but it works. The lurid scenes of the dungeon add to the bitter side of the world that envelope has built and in turn makes it feel a lot more grounded.

Soon after, the man’s blood slowly returns to his body because of a curse keeping the prisoners alive no matter what. After venturing further, Otto and Switch meet Otto’s long lost half-brother Oswald who informs them of the Black Knight’s true identity as being Brandy, the sister of Otto’s sister Bronwyn, aptly named for her alcohol consumption, and who was corrupted by an evil entity residing in a sword. 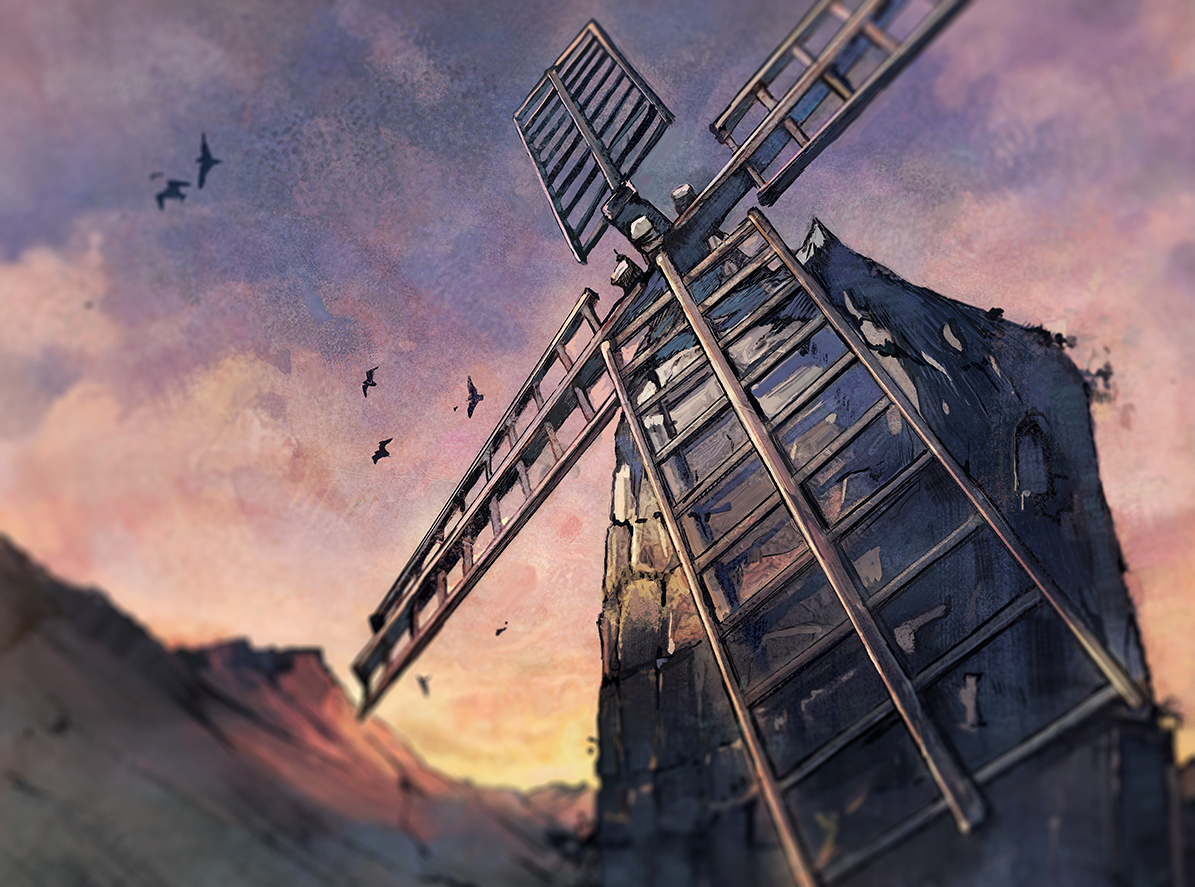 Chapter 4 continues as Otto and Switch escape the dungeon and once again fight Brandy. Upon their victory, they swear to destroy the sword once and for all.

Chapter 5, the final part of the game, is impactful with each character pursuing their own goal. Otto has grown substantially as a character and has fallen in love with his fellow glutton adventurer Switch, yet Switch has her own plans to fix up her home kingdom in order to prevent it from plunging into bloodshed yet again.

Much of this chapter is tying up loose ends with the characters’ relationships and what-not (and in some ways even solidifying some) and it’s a nice way to end off a genuinely impactful (yet short) story. Many of the messages in this chapter are really sweet and the story ending the same way it started is rather poetic and beautiful in many ways. 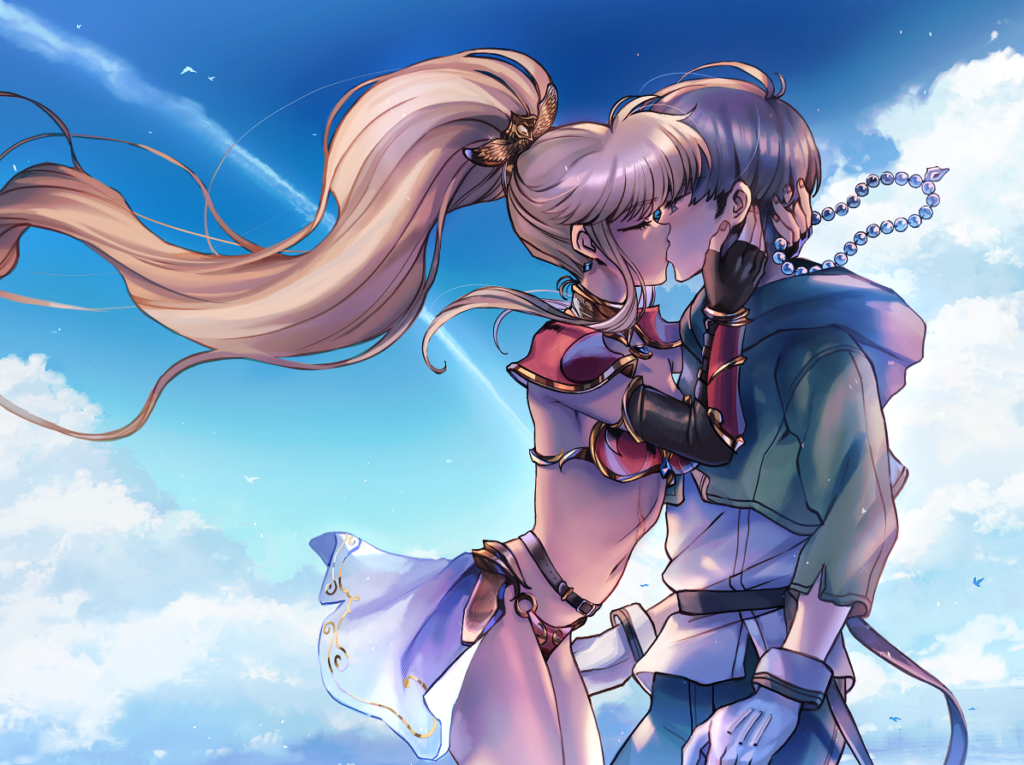 The writing of this game is really nice; there’s an indelible sense of care taken in each line and there’s a fair bit of linguistic puns here and there showcasing the writer’s wit.

The art is also phenomenal. The backgrounds are stunning, and the characters designs take inspiration from 90’s anime and in that way are really refreshing in the modern VN landscape. The flamboyant hair and outfits of the characters really sells the fantasy aspect in the best ways possible.

The music does its job well. I wouldn’t say any track is particularly brilliant, but they serve their purpose of making scenes either more adrenaline pumping, interesting, or stunning.

And, of course, the visual novel aspect itself is done well! With the side character portraits, beautiful looking sprites, decent animation and effects for the monsters and shadow beings, it is all really nicely scripted and presented. 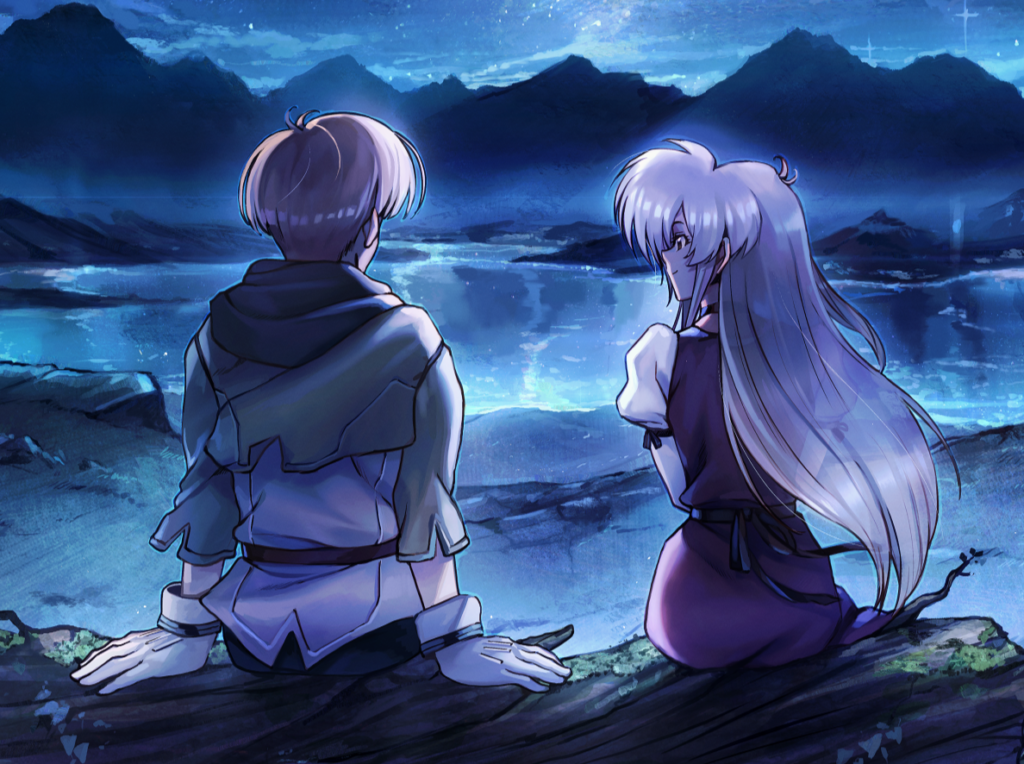 The biggest flaw with the game is that it’s short. Every aspect of what’s in the game has an immense amount of care put into it and I only wish we could’ve seen more of the character shenanigans.

Queen Beast is definitely worth playing, especially considering such a carefully crafted literary cuisine is FREE. Yes, this game is FREE.

I’ll leave this review off by saying that I’m excited to see what Envelope does next. The crew here is very talented, and I’d love to see more stuff from them.

You can download the game on Steam and Itch for free!