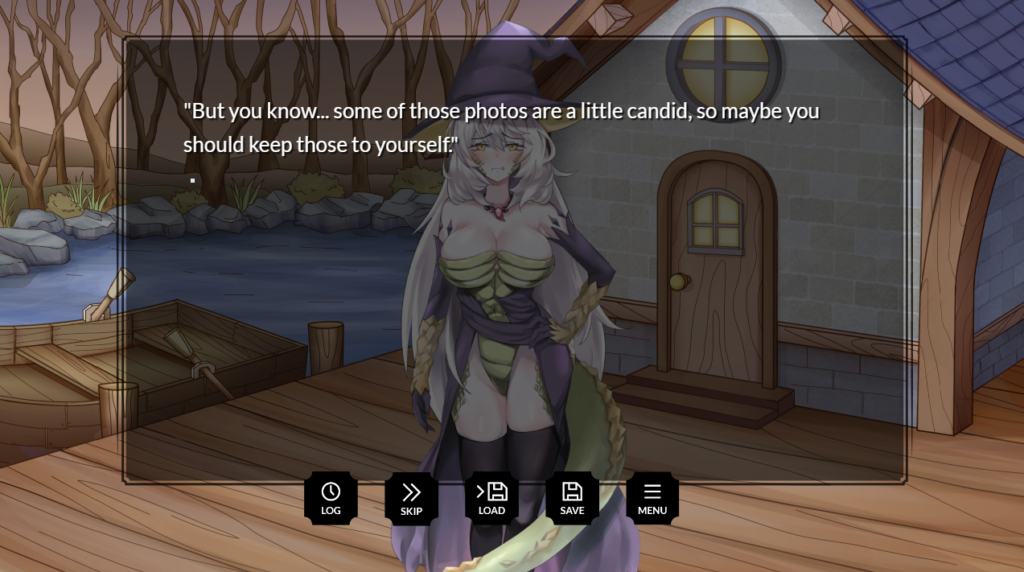 I thoroughly enjoyed Dark Waters, though I found myself wanting just a bit more after the game rolled credits twice. The game has two endings total, with one of the erotic scenes hidden behind them. Our main character, Gino, an occult researcher, comes across a small, desolate town in the swamps of southern Florida: Point Blank. There are rumors of terrifying discoveries here, including anthropomorphized monsters and the corpses of brutally murdered people. But Gino finds nothing of interest in this ghost town. When he plans to leave, however, he encounters a beautiful woman and self-proclaimed witch tossing a large bag of something into the swamp. After some flirty banter, the witch invites Gino to her small house, which floats quietly atop a lake. Unfortunately, the game leaves some plot threads unanswered that I simply can’t ignore, as well as a criminal lack of story precedence for our main witchy waifu, Cuca Rivers. These flaws are disappointing, given how well this game is written. 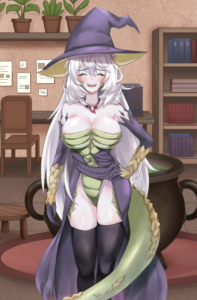 While the character design is fantastic, I found the rest of the graphics to be a bit too cartoony. The house, swamp, and city look like they’re just reusable assets and don’t add much to the detailed writing. Cuca Rivers is decked out in golden scales to accentuate her voluptuous form and has an adorable crooked smile. Furthermore, the art style used for Cuca clashes with that used for the backgrounds, especially since Cuca is the only character with a sprite. This is something that comes into sharp focus when other characters are supposed to be “on screen” in later sections. 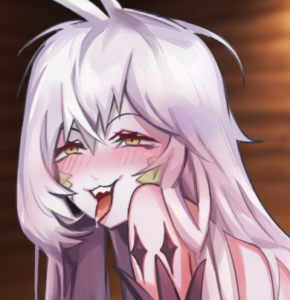 Speaking of nightmares, none of the gore within the game is shown or described in a sexual manner. There is a CG used for a brutally violent scene depicting color-inverted, smeared, and splattered blood on a black background.

The game engine is horrible. While I initially appreciated the forced breaks between sections, they became obnoxious once I learned that I couldn’t skip through those sections. The skip function can also bug out sometimes, leaving the player wondering whether the game froze, if it needs player interaction, or if it’s just running the script without showing the text … because that happens, unfortunately. This becomes even more bothersome with the realization that the backlog is incredibly bare, showing only a few lines of barely visible text with no ability to go back further, even if the scene hasn’t changed. Fortunately, the game’s Itch.io page states that this is the last time Outis Media will be using this engine.

I confess that I fell asleep with this game on in the background, and will probably continue to do so. It’s fitting, given the game’s usage of sleep, dreams, and nightmares. The sounds of the Florida swamp are perfectly mixed with the music, providing a relaxing atmosphere. When things do start to get scary, the music simply takes a minor key, keeping the beat without jolting players out of their perceived safety.

In my opinion, the writing is incredible—though I hope in my heart of hearts that there were time or script limit constraints. That would explain why there were certain plot threads left unfinished. These include (spoilers ahead) the bag that Cuca throws in the swamp at the very beginning, and the iron summoning mark in Cuca’s house. Why was Elenora only brought up after Gino was under Cuca’s spell? This casts doubt on her existence. Was Gino’s botched summoning spell really what killed Elenora? Cuca has gaslighted Gino enough for her words to be called into question, and he clearly sees a femur in the cauldron while Cuca insists that only the top half of the body arrived at the house. Who came to the house in the “safe” ending?

Early on in the game, Cuca mentions that humans used to worship her and the other magical creatures as gods until some robed men caused havoc and forced a cultural religious change. Since then, she’s been lonely. There are blatant mentions of the Salem witch trials (which happened in Massachusetts, not Florida), as well as Wicca. (As a practicing Wiccan, I was delighted by the accuracy of the text when it alluded to Wiccan charms and altars.) Unfortunately, Cuca’s connection to Wiccan practices stops there and leans heavily on the stereotypical American tropes of witches: broomsticks, cauldrons, bubbling green goo, etc. Cuca reacts poorly when the Salem witch burnings are mentioned. This led me to assume she has a traumatic past, but I never received more information. Additionally, I began to see Cuca as a traditional succubus more than a witch, if only because of how she uses her sexuality to cast spells on the main character, her ability to shapeshift, and her short, yet interesting background concerning servants, religion, and cultural moderation. I would’ve appreciated a bit more insight into Cuca’s character. 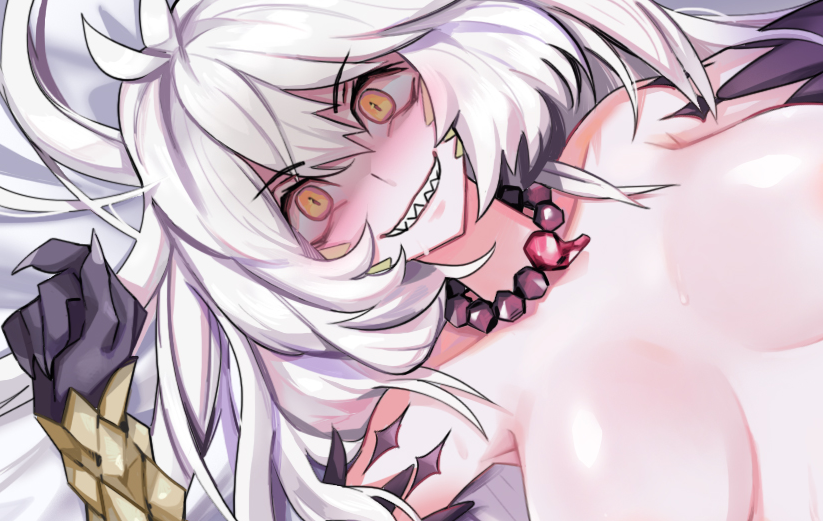 If you’re interested in Dark Waters, check out the store page here.
If you’d like to read more of my work, check out my website, Ouba Academy, here.

Denpa/horror enthusiast with a professional background in sex education and a love for media criticism and literacy.