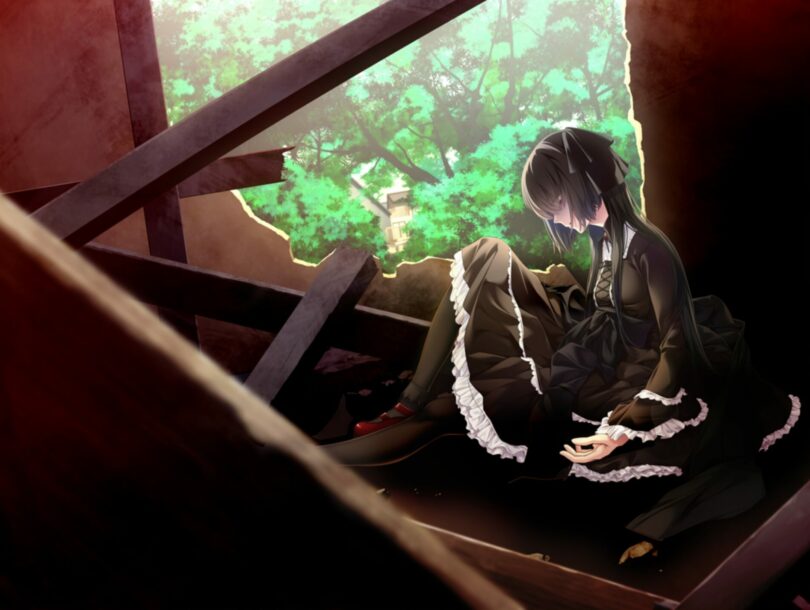 Before I begin my review of this visual novel, I must note that there is a ton of material within that could be considered offensive to players who follow the Abrahamic religions. If you get incensed by that sort of thing, or if it makes you intensely uncomfortable, you shouldn’t read this work.

Akuma to Yoru to Isekai to follows Rio, a young man contracted with a demon named Alice. This contract requires absolute obedience; additionally, it states that Rio’s soul will become Alice’s property upon his death. As a result, he works at her café for practically nothing (full shifts, seven days a week), and he does not benefit in any way except one: he becomes extremely hard to kill.

The art, music, and sound effects used in this VN are very much reminiscent of what was used in the 2000s. In truth, this chuunige wouldn’t have been out of place in 2006, so it might not be ideal for fans of more modern chuunige, or for fans of visual novels in general. On the other hand, the characterization and writing are both excellent, and the combat CGs are quite good, even if they’re not of the highest quality.

Like early chuunige, Akuma to Yoru to Isekai to depicts everyday life, interrupted at irregular intervals by danger and drama. This story structure was mostly cast aside in later years—later chuunige are structured so that “everyday life” is only explored in the prologue, and drama and action are the focus of the rest of the story.

The one obvious difference between this title and early chuunige is that this game focuses more on slice-of-life tropes in some routes than in others. So while I still consider Akuma to Yoru to Isekai to a chuunige, it doesn’t really resemble one once you get past the common route. 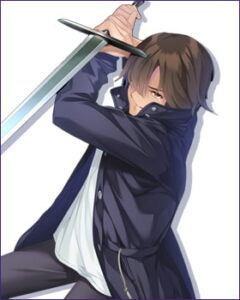 Rio – A young man living on his own in his older sister’s house. At a relatively young age, he formed a contract with the demon called Alice. This slowed down the aging process, making him look younger than he actually is—he looks like he is in his first or second year of middle school, but is actually in his second year of high school. Rio has no real talent for fighting and is quite normal in most respects. However, his refusal to abandon others constantly leads him into situations which test his survival skills. Due to Alice’s brutal training, he understands how to survive an onslaught from a more powerful opponent. 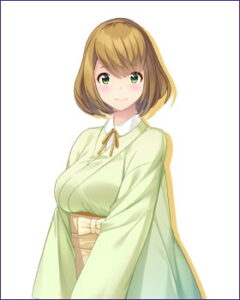 Waka – Rio’s childhood friend and next-door-neighbor, Waka is a half-kitsune who comes over every morning to wake him up and cook him breakfast and dinner. She is deeply in love with him, and confessed her feelings before the story begins. When Waka gets excited, her ears and tail appear. She is sweet-natured and kind, but she has a tendency to be blinded by delusions when it comes to Rio. 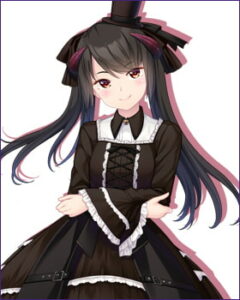 Alice – A demon whose existence predates that of humanity. Like all demons, she is forbidden from harming people directly and can only trick them. She has a strong desire to escape her eternal ennui; therefore, she likes to push a given situation in the direction she finds the most interesting. She is fond of Rio, but in the way one cherishes an amusing toy. This is mixed with more than a little sadism. She gleefully adds to his financial debt whenever she can. Her full motives are unknown, however. 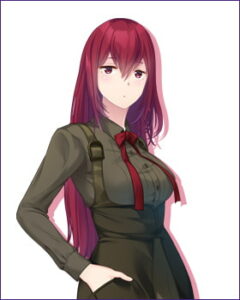 Maria – A vampire girl Rio rescues during a fight with an angel. Maria is an intensely lonely woman, and so she considers her meeting with Rio the first good thing to happen to her in a long, long time. Despite her sweet nature, she lacks some sense, and doesn’t hesitate to treat him like a blood bag. 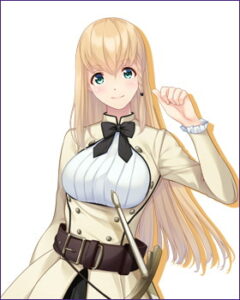 Eliza – She claims to be the third princess from another world, Claimh Solais. Despite her knowledge of the Japanese language, Eliza lacks much knowledge about the country. Rio doesn’t remember meeting her or visiting her world, which causes her great pain. Eliza is something of a stalker, and because she comes from a different, harsher world, she resorts to violence more quickly than she ought to. 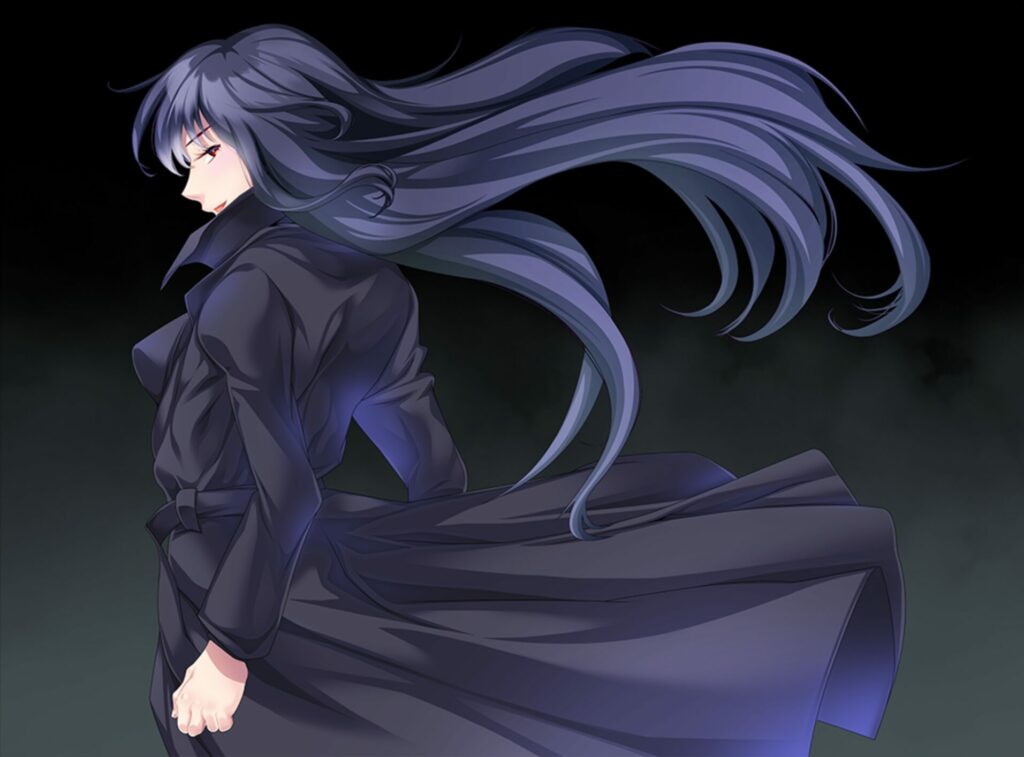 Iori – Rio’s older sister, she is the pinnacle of Earth-born humanity. Capable of squishing angels and demons like bugs, Iori is constantly summoned to other worlds on the verge of destruction. As a result, she has no time to deal with things on Earth. She loves her younger brother, but it is a tough love.

The common route of this game is fairly long and thoroughly introduces the characters. There are sexual scenes (though no penetrative sex) contained within this section. The lengths of the heroine routes vary.

Unlike many common routes, there’s enough drama and action for this one to be a story in and of itself. There are sufficient unresolved plot threads to allow for true branching, with each branch having its own drama. Experiencing this kind of story through Rio’s perspective can be frustrating, since he is usually the weakest person in the room, but by the end of the common route, the reader will have a full understanding of Rio’s nature and, to an extent, that of each heroine. 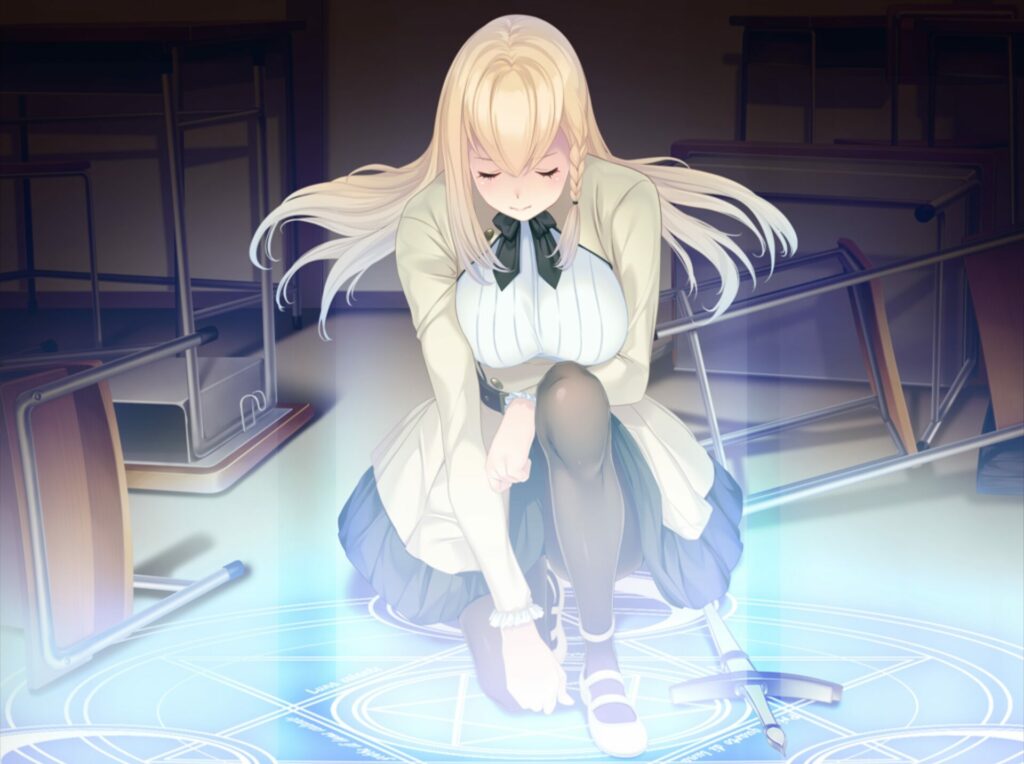 Eliza’s route is decently long at about three to four hours, but it’s probably the weakest route in the game. I say this because the basis of her relationship with Rio is mostly hidden from the readers due to the way the story is written.

The action in this route is limited to several early scenes, and the resulting drama focuses on Rio and Eliza’s relationship changing from a one-sided crush to a mutual romance. This route succeeds in tying off Eliza-related loose ends, but since it includes very little detail, it is something of a disappointment.

The ending of Eliza’s route is one that states “and life goes on,” something which writers of visual novels tend to abuse. There is no real epilogue, so the ending feels a bit abrupt, unfortunately. 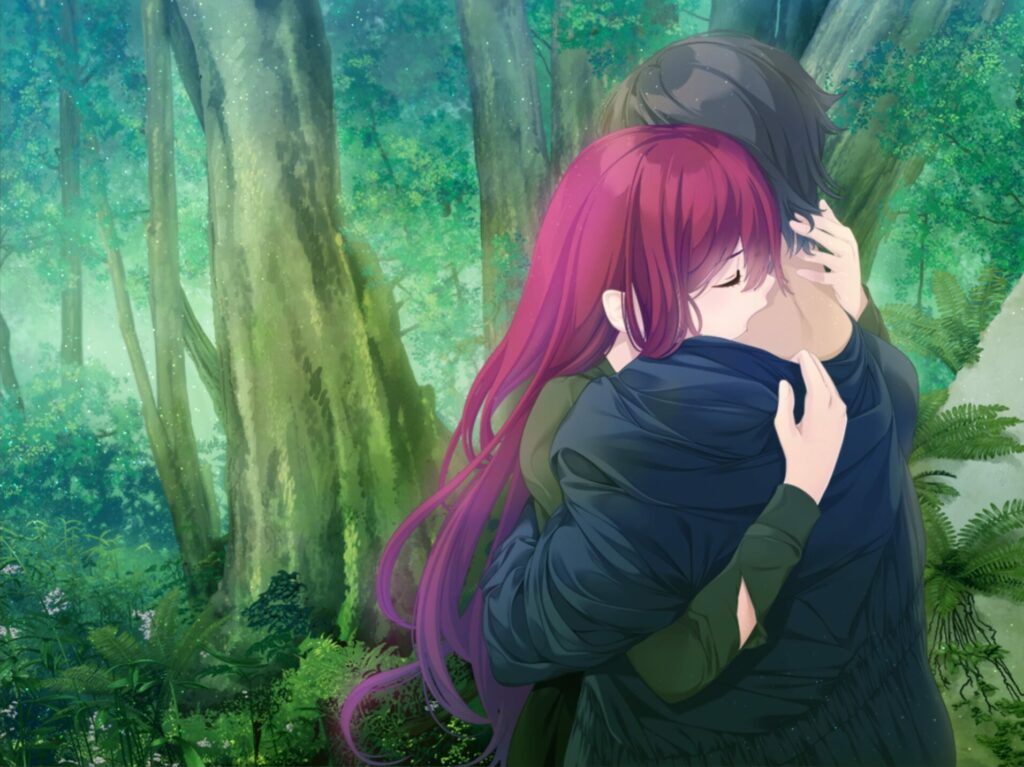 Maria’s route is significantly more action-packed than Eliza’s, which is typical of progress-locked paths in general in visual novels. Maria is a vampire, so her story is naturally more focused on vampire things.

Generally speaking, Maria is very straightforward and somewhat childlike when it comes to expressing emotions. Her loneliness has made her somewhat clingy. In this story, vampires are usually born rather than made, though it is possible for a true vampire to create a lesser vampire. This is a quality route., but I found the lack of a significant after-story to be a downer for me; I tend to prefer long after-stories.

Unlike Eliza’s path, Maria’s fits into the chuunige genre. If you don’t like melodrama, you will probably have issues with this route. However, those who like the common route should find this one quite enjoyable. 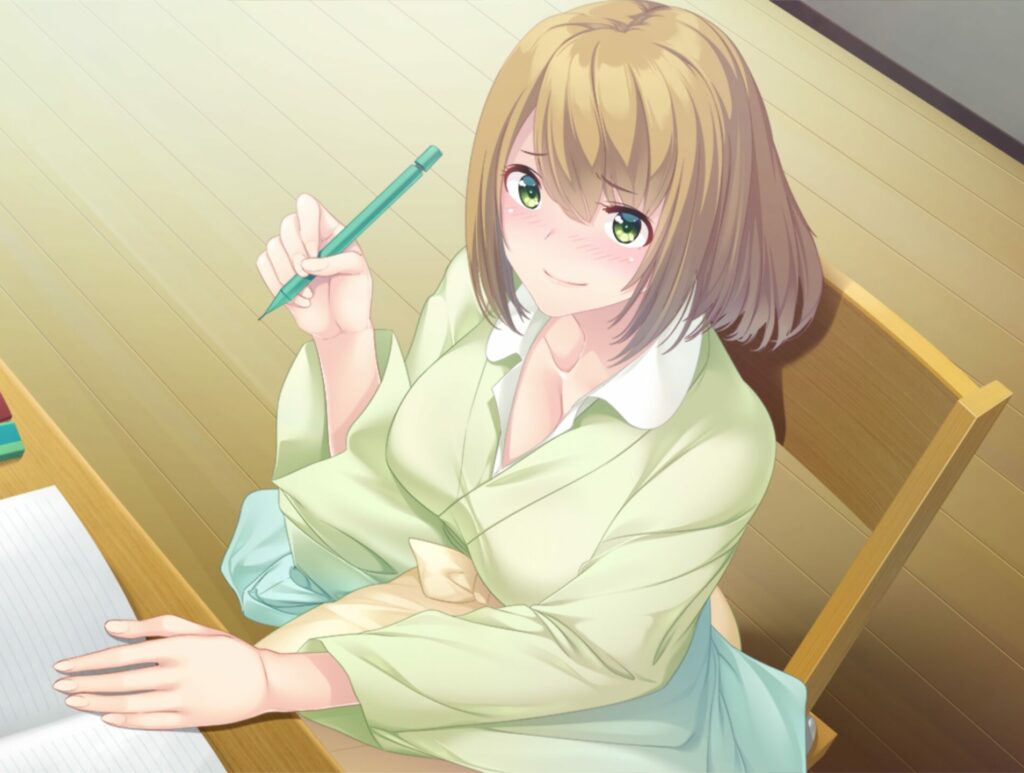 Now, I’m going to be blunt. Waka’s route starts out with the classic “I don’t want to get you involved” trope. Additionally, this route has so much H-content (more than the other two routes I’ve mentioned so far) that more time is spent in H-scenes than in the actual story. I honestly don’t know why Wendybell decided to do this since the other two paths contain a normal number of H-scenes. In my opinion, this path just isn’t worth playing.

This route also has a side ending featuring the angel, but it only adds more H-scenes and reveals a little bit about Rio’s history with Alice. 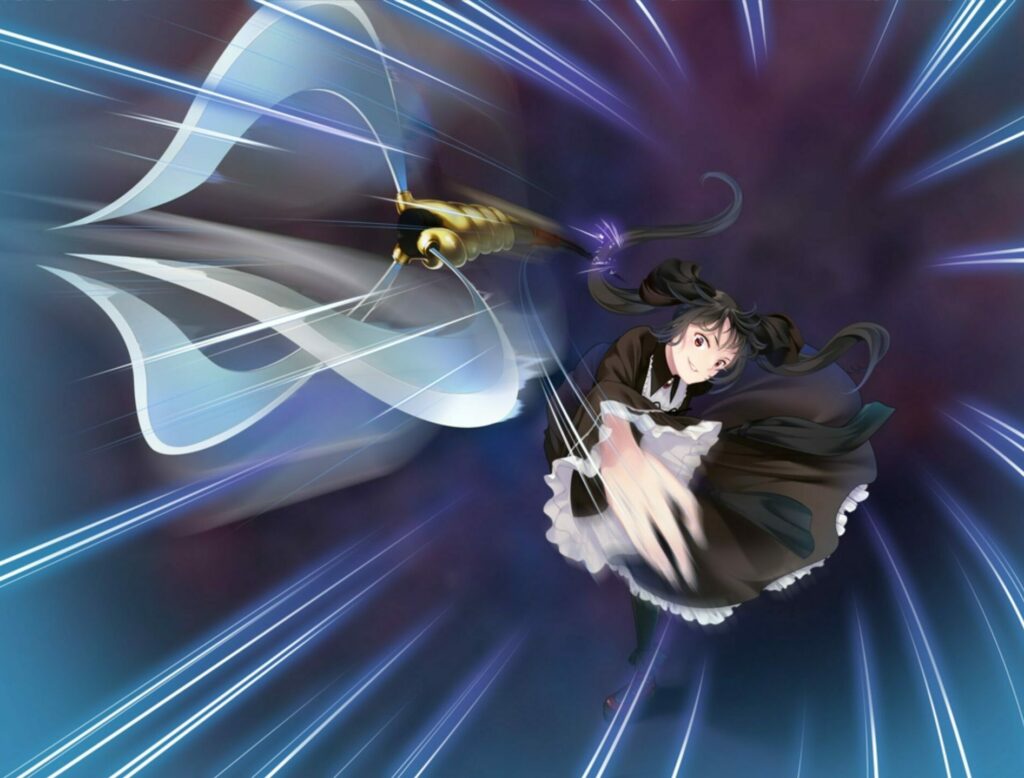 I don’t know exactly what to say about this path, except that, from beginning to end, Alice is a demon. She is evil, and chaos personified. Her primary reason for living is to ease her boredom.

More importantly, however, Alice’s route thoroughly reveals Rio’s character and deals with issues that pop up elsewhere. It’s the most complete of the four paths. For readers who want romance, this route can either be considered the ultimate love story, or a tale of corrupt love.

With more combat and drama scenes, it’s slightly longer than Maria’s route. As a result, I found it the most enjoyable part of the work. But if you know you won’t enjoy Alice’s personality, I can’t recommend this VN. I found it impossible to dislike her antics, but they will probably give a good number of readers a headache.

This is a game of inconsistent quality, which probably shouldn’t come as a surprise given how different it is from Wendybell’s usual style. However, it’s a moderately high-quality VN for those who can enjoy it—meaning it’s not necessarily a waste of money or time.

For religious readers, or those who want a pure-hearted main/true heroine, Akuma to Yoru to Isekai to probably isn’t the best option. But for readers who like a true heroine with a twisted spirit, and a protagonist willing to indulge her, this is quite an enjoyable work.