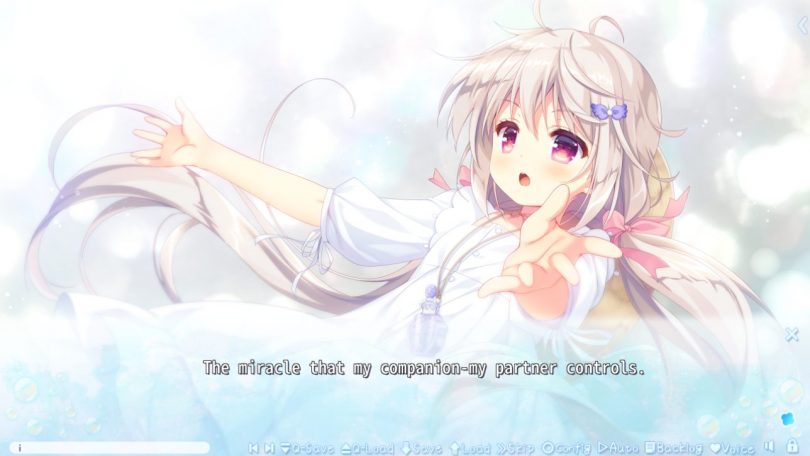 Welcome to the Fuwanovel VNTS, where we shamelessly copy the work of one illustrious 4chan /jp/ member in collating translation progress and add minor dabs of value through corrections and additions. Entries with updates this week in bold. This week’s cover is Hokenjo because that’s one of our friend’s dream projects he finally got out. (Unfortunately, it didn’t release in the best state it could, but later more…) It seems a bit like this week is just a calm before the storm, because next week there will be GSS and Leyline 3, both on the 11th, which we can have ample fun with.

Hi, Hata here. If you checked out our twitter you will have noticed that last week went extremely great for us due to our Katawa Shoujo Re-Engineered breakthrough post. While 4chan folk was involved in this game more than a decade ago, it does not count as a translation project towards this format, so we will not talk greatly about it on here. It is definitely worth checking out (+ our interview with Local Man) and the thread offers you everything that you require to understand why this was such a big deal for the community. Unfortunately, due to being occupied with work and a whole rain of interactions due to Katawa Shoujo Fans flooding our mentions, I could not really investigate what was going on last week. Zaka actually talks about many things I was not aware of, so this time he will be the one providing the depth despite it being a mid week for him. Without further ado, let’s go!

「Hi fuwans! Today I had a lovely pizza from the local ‘ria with the side effect of making me sleep for like 5 hours in the middle of the day as I digested its majestic beauty (mostly the carbs and fat). Anyway I got up at 19:00, slightly confused but very refreshed. I did sleep a bit poorly during the actual night before, so I guess I needed the addition. Anyway, this looks like an aggressively mid week to me. Hata may have a divergent opinion given that he actually cares about nukige, so I’ll leave commenting on Fakku’s Yariman release to him. 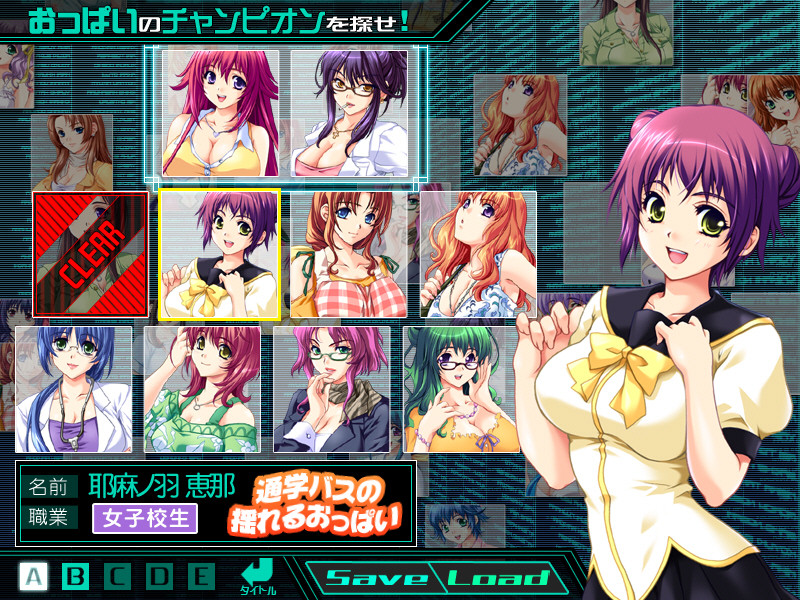 Joining the nukige train, Oppai no Ouja is one of those titles where the character designer is listed on vndb but the writer isn’t, so that’s a sign of quality. The art actually looks unusually good based on the vndb screenshots, even in the ero scenes (it’s sad how much some VN art devolves in the porn sections… maybe the lack of clothing puts more emphasis on any anatomical sins committed by the artists.) It’s one of those VNs with about 5 million girls to enjoy, aided by a supply of sex coupons. Who would you do if you had like five of those? Wait, don’t answer that. I just know some of you bastards would pick Dovac, and we all know he’s mine. Ahem.

Apparently you need to pick the right girls based on their breasts or you don’t get more coupons. Luckily, you’re the “breast king”, so you’ve got the boob ID skill down pat. Which reminds me of one of my old guildmasters in WoW. When the whole RealID thing rolled out, we found out that his email was like breastmaster@[atsuimeeru.cum] or some shit. Part of me wishes I was kidding, part of me thinks it’s hilarious.

Continuing the nukige parade, MG has set Nightmare x Sisters’ release date to the 17th. I feel like this is their first Guilty title, though I’m not sure. Decent art for this one as well, it looks like. Unlike the oppai boi earlier the plot looks to go along standard darker nukige lines. But maybe that’s what you want. 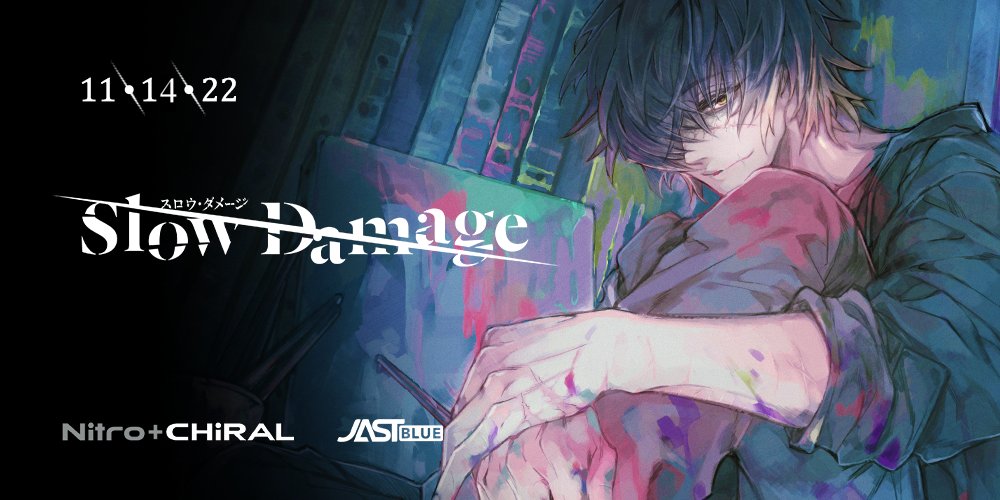 Slow Damage is coming on the 14th. I think approximately everyone interested in it knows about it by now, but it’s a Nitro+ BL title, so we can assume it’s going to have lots of edge, actual plot, and of course a healthy dose of men fucking each other.

On the Sekai front (Sekai vs the world, famed youtuber learning all languages at once /s), Hoshimemo’s FD and Qualia are now both “awaiting approval”. I think that’s Japanese-side approval, but maybe it’s Steam-side? Man, once upon a time I used to care about these things. Anyway, Qualia is interesting. I remember thinking it was just moege when it was announced, but then someone said it had more depth. Given that the subject is humanoid robots, you can certainly see where it’d pull from. Looking over the Erogamescape page, people seem to _kind of_ agree with the whole depth aspect, but I can’t shake the feeling that they’re maybe overstating the more cerebral aspects. I’ve seen people do these analyses of hecking Nekopara, so I’m pretty noided at this point. 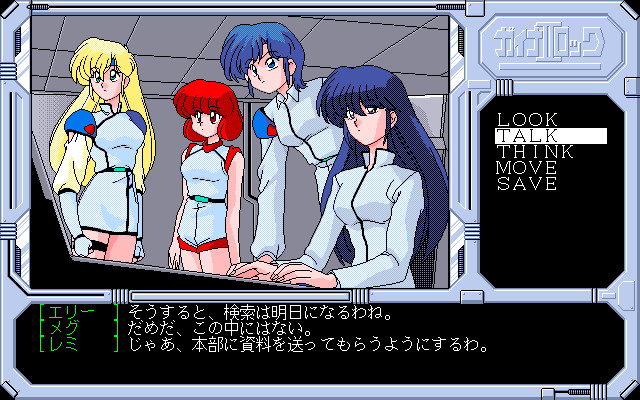 Possibly the least expected title this week is Guynarock 2, a PC-98 adventure game from 1992. I’m technically older than this game. Help. The translator claims that you don’t need game 1, and has no plans to do it either. The English release seems to be based on some different version than the one in Japanese on vndb and doesn’t actually have ero scenes? But it’s still rated 18+ apparently. Other sources indicate that Guynarock 2 never had ero and it was only in 1. I am mildly confused. Probably 2 didn’t and people just miscategorized it, though it does seem to have things that get close and decent amount of boobs on screen. I don’t know why I looked into this for so long… Ah well. The vndb scores for the title are 2, 5, 5.2, and 7. Not exactly a ringing endorsement, I have to say, though this was before the translation so god knows who was just rating it based on the CG set. I also shouldn’t really talk here, given that I translated Swatted Fly. You know, it always brings a smile to my face when I see the scores for that game. The addlepated simpleton coomers cannot see its silent beauty, of course. It’s to be expected. It’s still not on the last page by bayesian rating though, so you guys still have work to do! 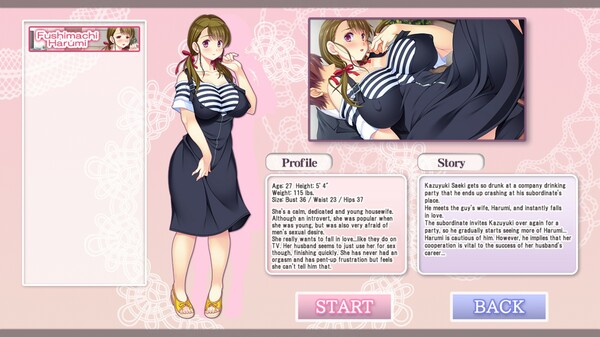 Returning to nukige hour, Obedient Women is being done like a mobile game… but on PC. You need to buy the heroine routes as DLC, but the common app is free. There are 4 routes out right now. Regrettably, the publisher is artlink, known for such shitty translations as Tenkiame, the official Knot Fiction tl (there’s a fan tl for that one at least), HarmonEy… the list goes on. I would expect garbage, but I didn’t check out the Steam page for this game so who knows.

「Hello Fuwans, time to do my part, so let me see what Zaka left over for me… not much it seems. Bummer! Well, then let’s get to it.

Yeah, it seems like this week was filled with Nukige to the brim, huh. Personally, I was only looking forward to that Gyaru nukige from FAKKU with the apt name St. Yariman’s Little Black Book for which FAKKU readily delivered a review code which I handed off to our new nukige write Vuparian/Tokimime who has quickly released a review of that game in the span of 2-3 days. This probably can tell you that while this game completely strikes my niche, it does not have that much content to go through. Just check out the review for a closer look! The translation was done by Sathelys and Jbtenmatay. It did its job greatly! 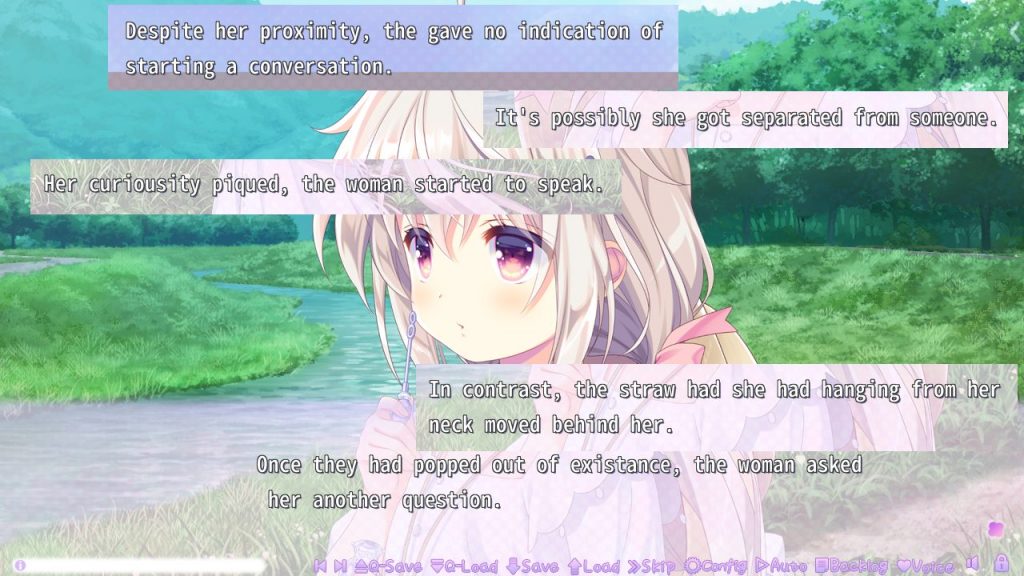 Next, there is the release of The School Nurse and His Soap Bubble Addicted Assistant (Hokenjo) which was done by my good friend Tsukishiro with whom I worked on a trial translation of LOOPERS we had to cancel after an official project was announced shortly after. Since that day, we got to know another better and while I’m not the most reliant due to being busy with Fuwanovel, Mimir, VN.Info, social media and real life obligations I occasionally help out as QC for these projects. Unfortunately, I didn’t really spend too much time on this because of said business, they let someone else do a QC run and released Hokenjo in let’s say… not the best state possible… I took up the burden to do a quick QC run of that game after the fact, so people get to play a quality release! It does need it real bad (see screenshot), people are already making memes and dismissing the project before trying 🙁

About that new artlink game, Obedient Women, I have posted on the forums before. I’m not convinced I will play this, but maybe our new nukige writers will. We will see what comes off it, but I’m not happy about episodical releases like that. Mah, I can’t access it from Germany anyways… The screenshots and the character description that was posted in the Steam screenshots didn’t look… awful?

I think that’s it, so to extend the length of this post at least for a bit, I decide to add the new video by eroge history content creator BowlofLentils, who has made an amazing one-hour documentary about “The History of Leaf”. This is absolutely worth watching and once I get the time I will watch this again while following the sources list they additionally posted on Giantbomb. This guy is amazing.