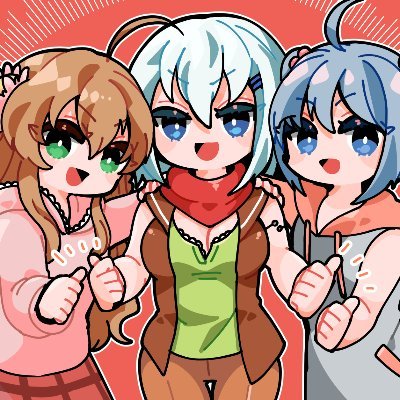 Every day, there are more than 300,000 videos uploaded to YouTube. This creates such manifold content that there are communities for every topic imaginable. Of course, there are also communities who produce content concerning visual novels. However, the bubble in which these content creators are located is easy to overlook. You need to delve quite deep into the community and know its figureheads (or steer the YouTube algorithm deliberately) to be able to find smaller creators. 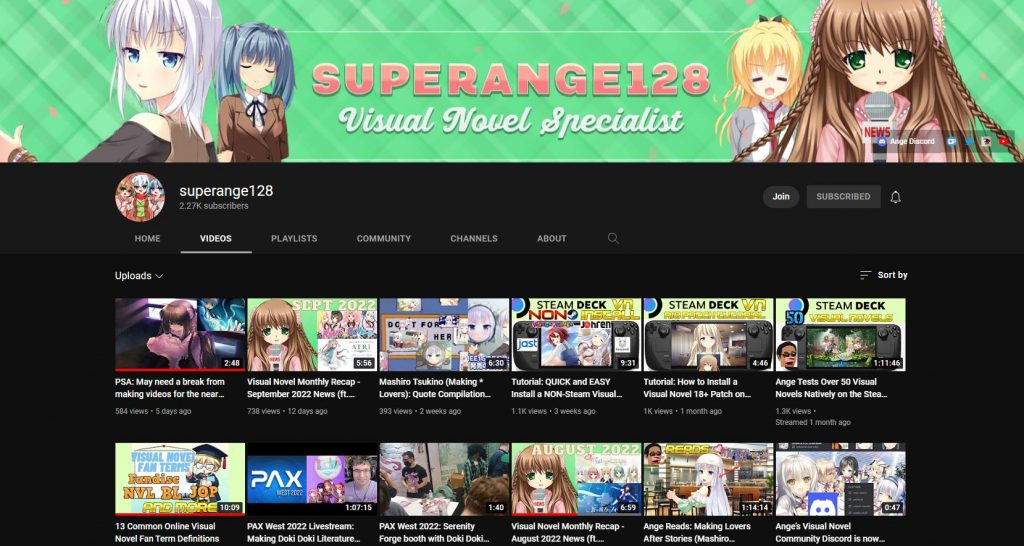 Up-and-coming visual novel YouTuber SuperAnge128, who was a diligent moderator of the r/visualnovels subreddit for years, has been creating videos with a purpose: to inform people about visual novels and developments in the scene. He also creates many videos concerning topics for VN beginners and the terminology they need to know.

On July 30th, 2022, SuperAnge128 uploaded a video giving forty YouTube channels a spotlight. These channels fluctuate in size and subscriber count. He sorted those creators into different categories to make indexing easier. We realize that it’s a big ask, but we will now take the time to add fifteen more to the total. Please follow all these channels and add them to your subscription feed. The original article was published in German on Visual-Novel.Info, but we feel that we can make a bigger impact on an international page like Fuwanovel, so we translated the article to English and added some extras!

Our additions to the pool

The creators we’ve chosen to highlight are neither sorted by size nor the intrinsic value of their content. However, there are four or five friends of ours among them. We’d like to signal boost since their content is cool! In addition, we’ve also added a couple of VTubers who frequently cover visual novels to the list. 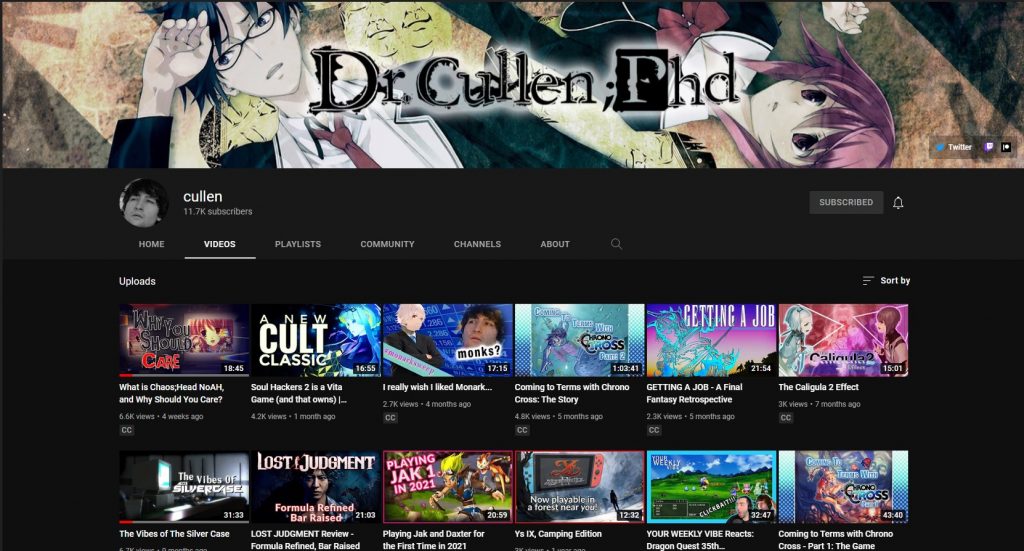 Cullen’s YouTube channel is closely related to the Science Adventure fandom community and began with him publishing a video called “Chaos;Child – Why you should care“. This video, which is among his most viewed, made him known as the “Chaos;Child guy”. In general, you will find video reviews about the Science Adventure Series, massive JRPGs, Atelier and more. Just recently, he published a video critiquing the official release of Chaos;Head NoAH. His other valuable videos include thirty-minute essays on games like The Silver Case. He’s definitely worth your attention! 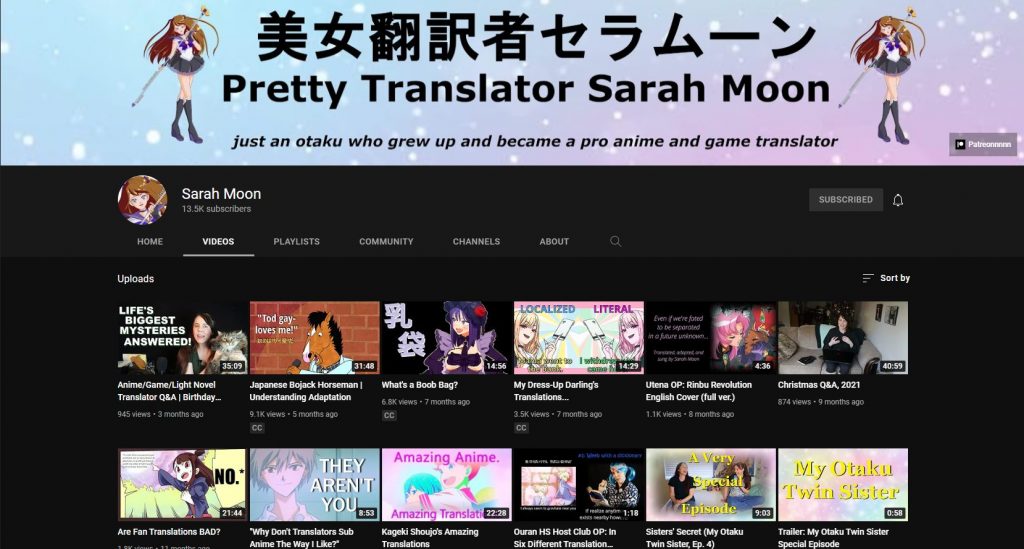 Sarah Moon is one of the few Japanese learners who could manage to make her dream her job. She’s a renowned translator for visual novels, otome games and other video games. Sarah’s journey began when she created otome game translations for mobile devices, but then she diversified her portfolio and now presents those experiences on her channel. Six years ago, she launched her channel with the video called “How I became a Japanese translator.” She produces content that gives insight into the opaque, and often criticized, localization scene. Whenever there is a new anime translation controversy, she creates a video on it, clearing up misconceptions about the situation.

She deals with the more difficult and ambiguous aspects of the Japanese language and her channel is a good resource for those learning how localizers operate. However, her videos are frequently seen as confrontational by some, and thus, they sometimes blow up on social media. 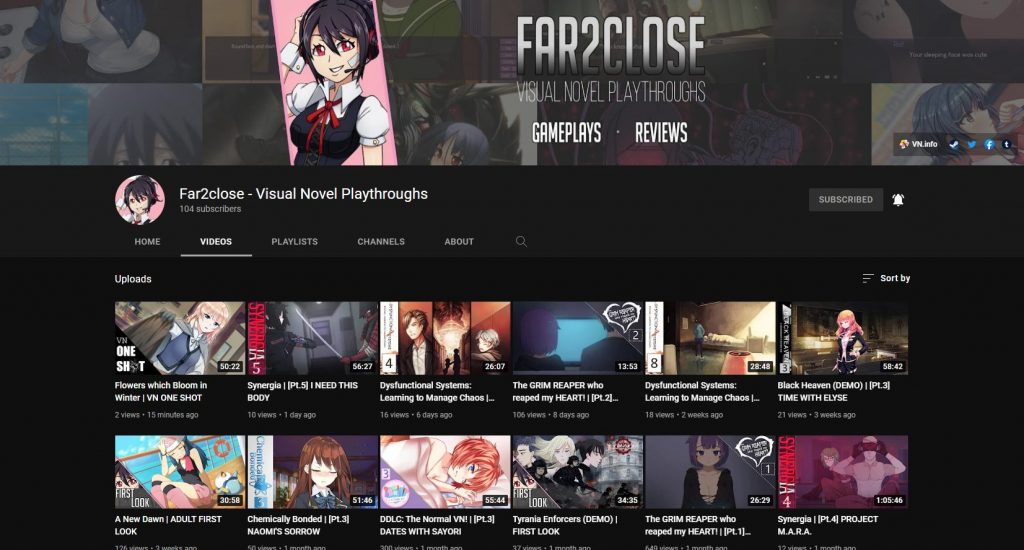 Far2Close is one of the people directly partnered with us through LoveVN, and we considered it sad that Ange didn’t mention him in his list. The reason could be that his channel was deleted a couple of months ago due to his content being too erotic. Since he covers visual novels and eroge, YouTube might have put him on a shortlist. For years he produced Let’s Plays, showcases, and first impressions of indie games that generally fell under the radar. Nowadays, he covers games such as Synergia, Black Heaven, Dysfunctional Systems, and Chemically Bonded. It would be highly appreciated if his channel received more attention! 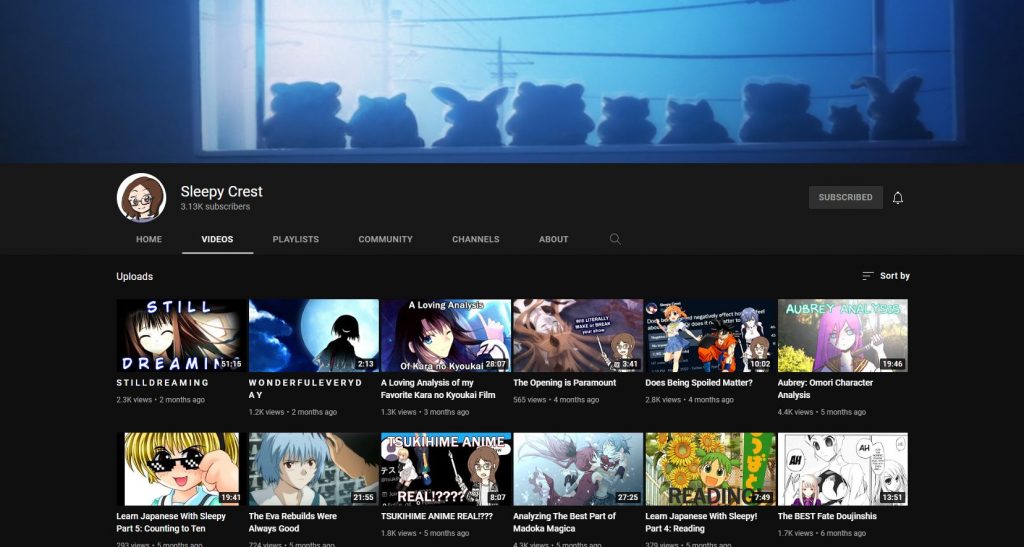 In the original article, there was a German channel included, but since Fuwanovel consists mostly of English speakers, it would be pointless to add him here. Instead, we have opted for a YouTube channel we only recently found out about through a Wonderful Everyday Iceberg video: it’s Sleepy Crest. This guy mostly makes video essays about the TYPE-MOON franchise, but there are also some visual novel gems in there, including a 40-minute essay on Saya no Uta and several videos on learning Japanese. Please ignore the shirt.

Frankly, I’m a consumer of every channel mentioned here, but since this one only came to my attention recently, I haven’t yet checked out all his content. Treat it as a surprise! 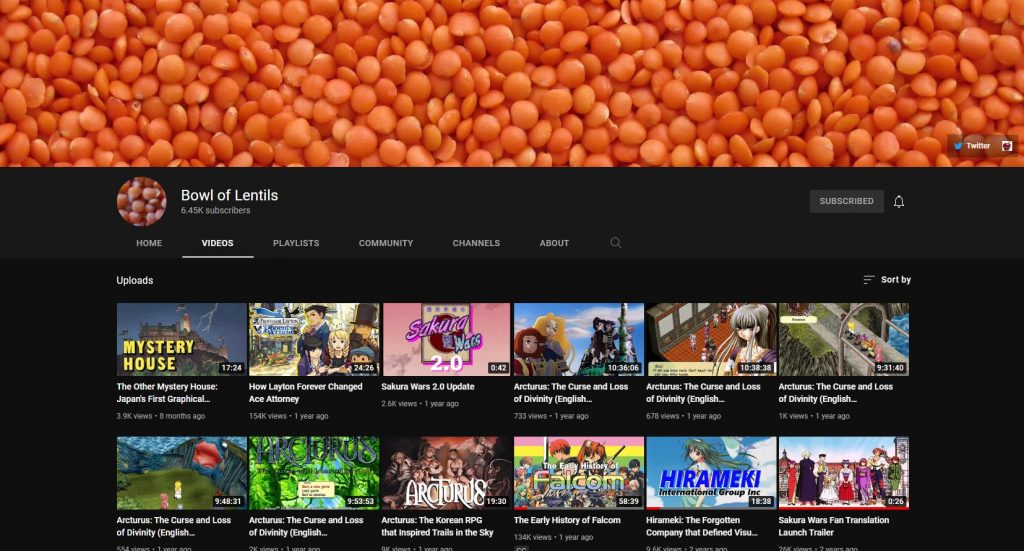 This channel began with the video titled “The Origins of Visual Novels,” but the creators have not produced many more videos since then. Fortunately, the quality of every single video made is stellar and deals with important topics that VN fans must be aware of! Among them are videos about the company Falcom and its beginnings, as well as an essay on a long-lost company called Hirameki International. Hirameki International was a publisher that released their visual novels in DVD format. You had to control the VNs with a remote (I’m not joking!). This is a very niche topic, so they deserve a mention in our listing. The channel owners add their sources below the video, so you can use them as a springboard into deeper research. The owner of the channel is involved with the Sakura Wars translation project. 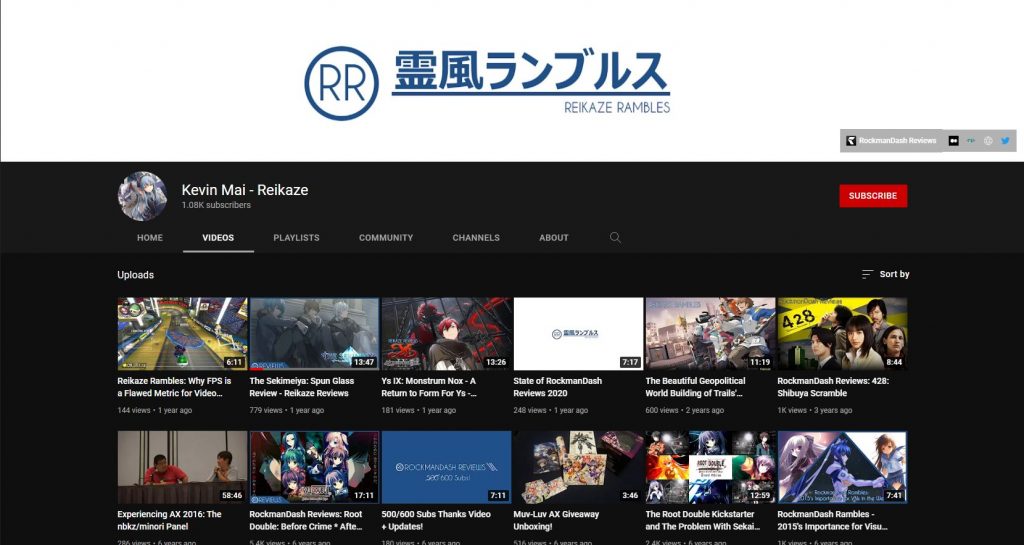 If you were into visual novels a decade ago, you’ve probably heard of Rockmandash Reviews. Initially starting with a review of Ever17, the channel became really active three years later, uploading reviews of smash hits like Fate Stay/Night, the Muv-Luv series, Higanbana no Saku Yoru Ni, Narcissu, and several others. Most notably, however, they made the effort – as it is with Ange today – to create content for uninitiated VN players and offer beginner guides for them. Although the channel seems very inactive, the last review, about the Infinity series homage Sekimeiya: Spun Glass, wasn’t posted that long ago. Subscribe and keep your eyes open? 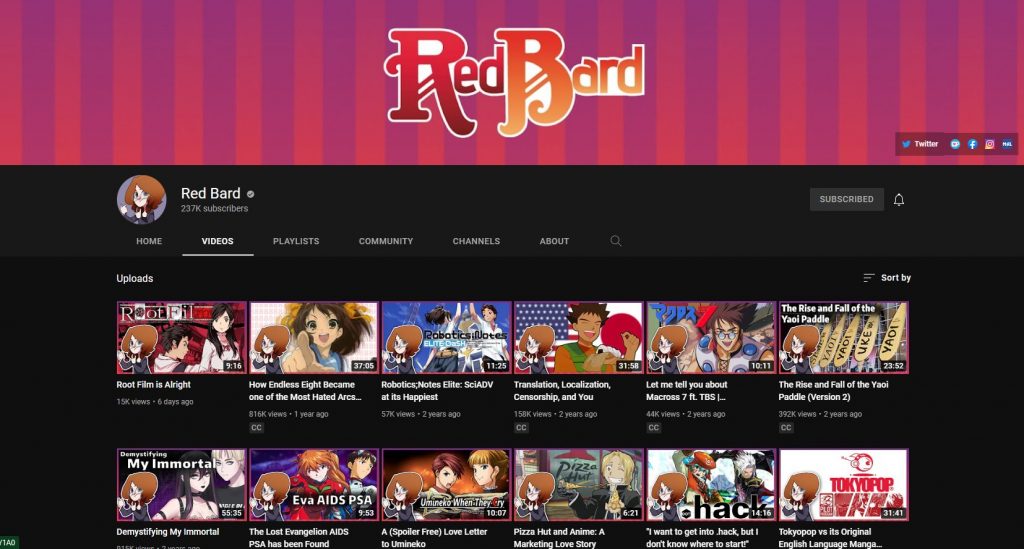 Since Ange also mentioned one of the biggest female anime YouTubers, Sydsnap, we’ll do the same with Red Bard. With more than 240,000 subscribers, Red Bard mostly makes content covering visual novels, otaku culture, and anime. The videos are almost always thoughtful video essay scripts, but just like Sarah Moon, Red Bard also boasts a background in the localization scene and creates videos about happenings and movements there. 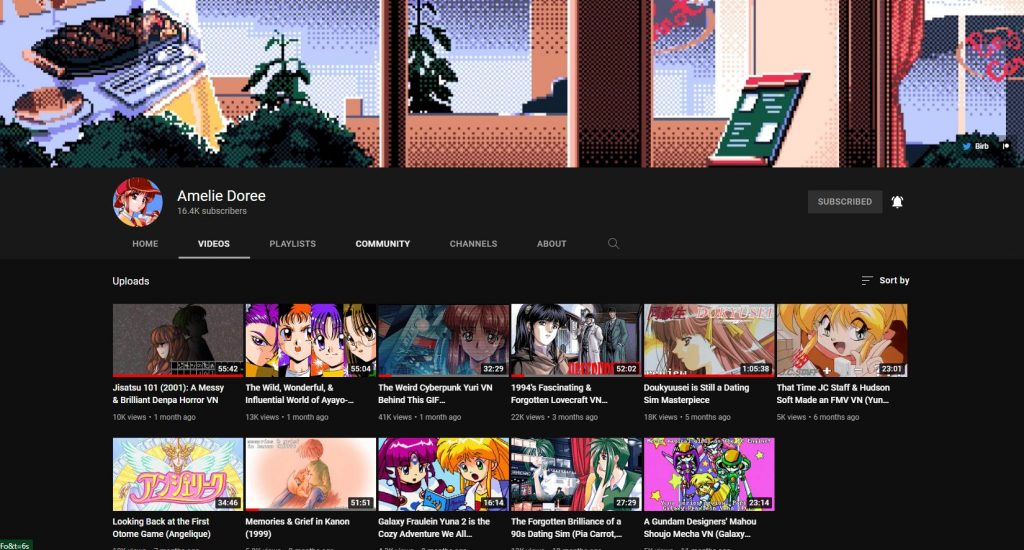 Trans YouTube creator Amelie Doree has only eleven videos posted so far, but they have a big impact. Most of her videos deal with influential games of the PC-98 era. We spotted her after Shiravune released their Doukyuusei remake, and then watched the trailer. We were directed by the algorithm to Amelie’s video Doukyuusei is Still a Dating Sim Masterpiece. Her videos are often extensive video essays, so you should be prepared to absorb a lot of valuable information. 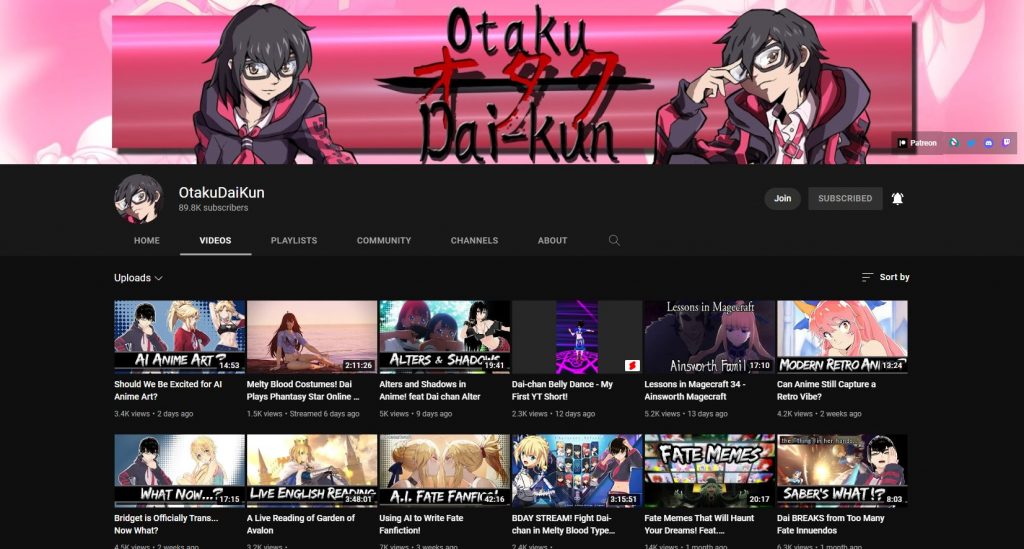 OtakuDaiKun is a creator who frequently talks about the intricacies of Type-Moon lore and anime games in general. He got our attention with his lengthy treatise on Dies Irae lore, which sheds some light on the rather muddled plot. However, his main focus is the Type-Moon franchise, as you can observe from his more than a hundred videos about Servant lore. An animated VTuber model acts as his stand-in for the videos.

10. Senri in the Minamisawa 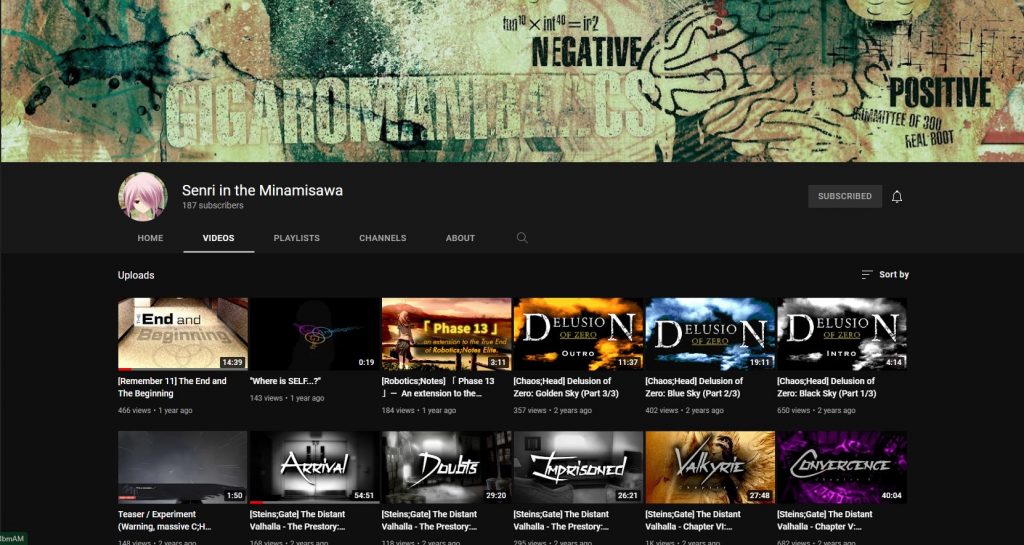 Listls, we want to introduce you to “Senri in the Minamisawa.” Behind this channel is the original founder of the Beyond the Gate Discord server. Unfortunately, after some conflict with the SciAdv community, he is not involved much with it anymore. He contributed elaborate animation videos to the community. Other videos deal with games in the Infinity Series by Uchikoshi & Nakazawa. However, there hasn’t been a new video posted for a long time and he might be retired now.

He is also the creator of the fanmade Steins;Gate visual novel called “The Distant Valhalla.”

There are also a handful of VTubers who cover visual novels. Here are the ones we consider worth a mention!