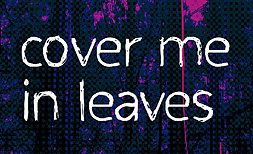 Cover Me in Leaves is a short visual novel included in the 10MG series. The 10MG series is exactly what it sounds like, very brief titles that are finished in under ten minutes, but that aim to use what little time they have to create a lasting impact. Cover Me in Leaves comes to us from Elliot Herriman, a trans woman from Melbourne who would later create the Calico interactive fiction engine, and who would later have a stint as the lead writer and narrative designer at Italic Pig.

I read through Cover Me in Leaves twice thus far, once about a year ago, and one just now. This particular visual novel was included as part of the Indie Bundle for Palestinian Aid that was held a year ago, and I didn’t have a lot of expectations going into it. The first time I read it, I was relatively unimpressed. I found that Cover Me in Leaves was overly abstract and difficult to follow. 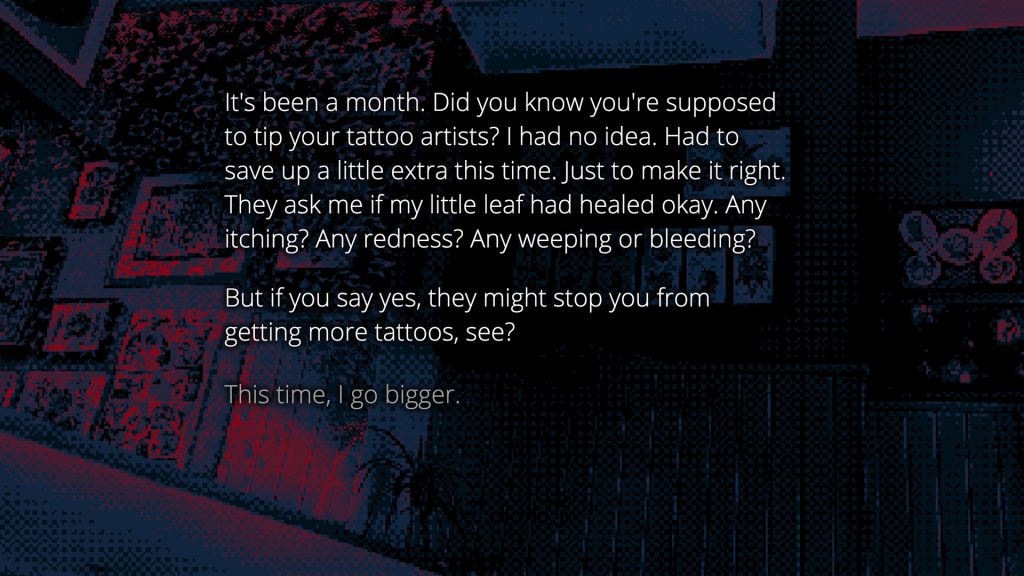 This much is still true, as there isn’t really a clear sequence of events or plot. There are some parts that do have narration, but the whole game is rather experimental in nature. I CAN say that Cover Me in Leaves clicked with me a lot more on the second readthrough. The basic plot seems to be that you are an unnamed person who is assigned female at birth living in some small American town. There is a quiet sense of unease permeating the game, as you listen to the same atmospheric track playing throughout. The backgrounds can be described as surreal and pixelated, with heavy amounts of static. The option to play it in a window is not available, but this game is best experienced in full screen anyway.

I earlier specified that the main character was “assigned female at birth,” because of the game’s queer subtext. It’s never outright stated that the main character identifies as a woman, and there’s definitely some trans themes that are heavily hinted at. What is confirmed though, is that the game’s title, Cover Me in Leaves, refers to the MC’s tattoos, which are all of leaves or other flora. Such tattoos can be said to symbolize concealing a part of one’s self. However, there’s a scene in the game where the large amount of leaf tattoos ends up drawing attention to the MC. 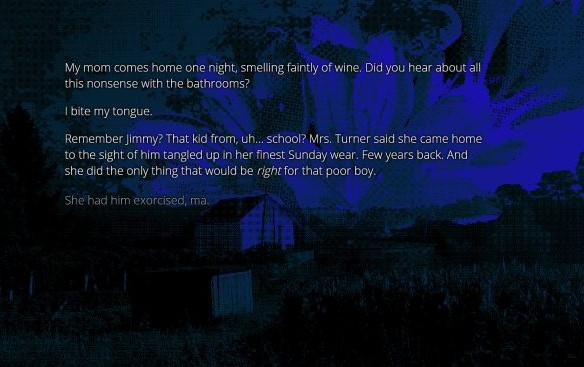 There’s very little that is actively told to the player in Cover Me in Leaves, but there’s enough to tell that a narrative is there, and it’s certainly enough to leave one with a quiet sense of unease and isolation. I’d describe Cover Me in Leaves more like a visual poem rather than a visual novel. I say this because one will likely be disappointed if they expect a straightforward story being told to them. But at the same time, this provides incentive for multiple readings, which a game this short definitely deserves.

Assuming that one hasn’t already purchased this in a bundle, the game goes for about $2 on Steam. Going by the “one dollar per hour” rule, it is not worth it, but judging a game like Cover Me in Leaves by traditional metrics is pretty pointless. It’s a “you get out of it what you put into it” situation, so I’d recommend it to those that are curious. 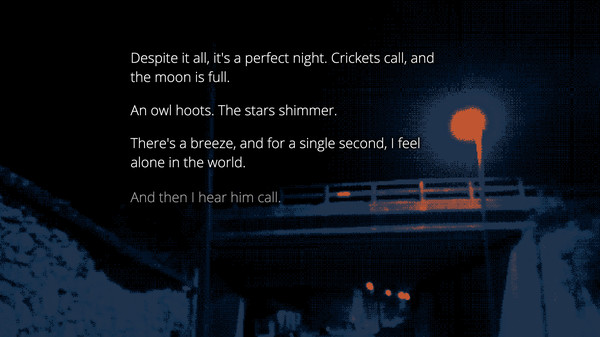 Annie Gallagher is an american trans-feminist blogger who runs GuardianAcorn, where she’s built an impressive list of pieces writing very detailed articles about video games, visual novels, politics and everything interesting to her. Her writing consists of reviews, deeply analytical pieces, video game music critique, poems, original fiction and more. She approaches things from a philosophical and introspective manner that is meant to touch upon things most people never tend to notice.