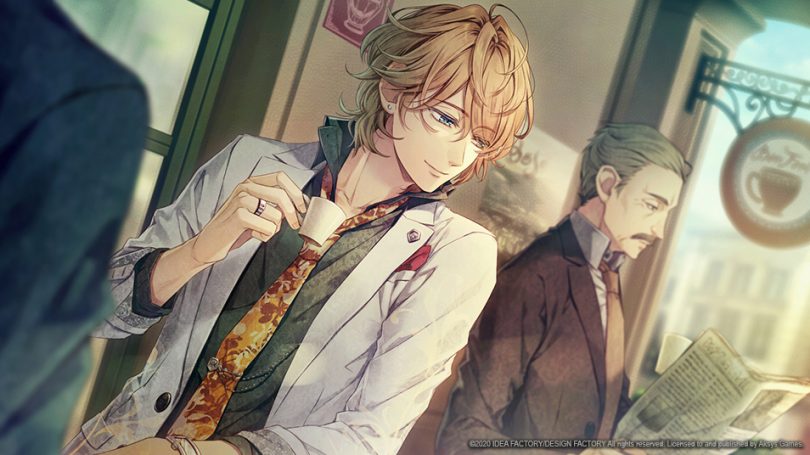 Welcome to the Fuwanovel VNTS, where we shamelessly copy the work of one illustrious 4chan /jp/ member in collating translation progress and add minor dabs of value through corrections and additions. Entries with updates this week or last week because I missed that one oops in bold, entries released or added bold italic. I’m too lazy to add percentage increases this week, sorry.

Today’s picture is from Piofiore no Banshou (Piofiore: Fated Memories). It’s actually the only release this week, so you can’t even accuse me of being otome biased! Phew. Oh wait, I missed some stuff I should’ve remembered. Whatever.

「Well, if nothing else I got some 2nd pass translation progress on Shinimasu in these two weeks… it’s simultaneously painful to see all my old mistranslations and pleasant to correct them. It’s kind of weird to finally be able to see the ending, though it of course is but a new beginning as then I have to review tlc and edits and qc and manage and manage and manage some more. At least the management part is a different kind of work than translation.

I think VBI actually released mostly on schedule, so it’s not impossible VBH will also release at the current date set. I would not, however, bet money, honor, or really anything of value on it.

Iwaihime is being published by ShiraVN, but the actual translation team looks to be Lemnisca. I’m definitely interested… but only in the Japanese text. I compared the English demo to a Japanese LP and while not a disaster — and yeah, Ryuukishi isn’t known for his prose quality — the translation is unfortunately not an improvement. I see lines that are both liberally translated yet somehow don’t make logical sense, awkward lines, failures to bring across imagery… and I only checked like 30 lines!

But I’m a translation elitist, and I know from experience most readers are unlikely to notice all that much of all that. I do think it actually makes the game worse, and I’d recommend avoiding it if you’re planning on learning Japanese. But otherwise? You can probably ignore my complaints. It is also a demo and I have no idea if more revisions have been done afterward, though my default stance on this kind of thing is always going to be that you shouldn’t get your hopes up.

I also don’t want to imply that this is somehow uniquely bad. I mostly don’t check translations; it’s a lot of work and generally you’re going to be disappointed somehow. Phew okay that’s all the elitism out of my system for at least five more minutes.

This review of the R;N Elite loc looks somewhat critical of both the translation and of some technical issues in it. Since it’s releasing tomorrow (wait, in two days, uhh SWEDEN TIME DAMN IT,) I doubt much of it will be fixed. I also see a somewhat related twitter thread focused on terminology by someone that did a small amount of work on the loc. All in all, be aware.

I’ve actually seen a JOP blogpost Mugen Renkan (Eternal Torment) and it looked interesting for other things than the sex, though it being a nukige in h-scene density means I’m unlikely to ever try it. Edit: I have managed to bamboozle myself and apparently the h-scene density actually isn’t that high, even though it has a lot of scenes in total. I guess maybe I’ll try it one day after all.

Piofiore no Banshou has the title Piofiore: Fated Memories for Aksys’ release. I’d say it’s yet another Vita otomege release, but it’s actually a Switch-only release! The times, they are a-changing. Were I to possess the console in question, I might conclude that at least the setting looks somewhat interesting, though comparing it to Ozmafia gives me a mysterious sense of déjà-vu. But I do not, so whatever. Actually, that reminds me I need to do my perennial obsessive check on Vita emulator progress. One day, I’ll be able to realistically play Shinigami to Shoujo on my humble personal computer. I will then proceed to treat it as yet another backlog item and never get to it. As one does.」