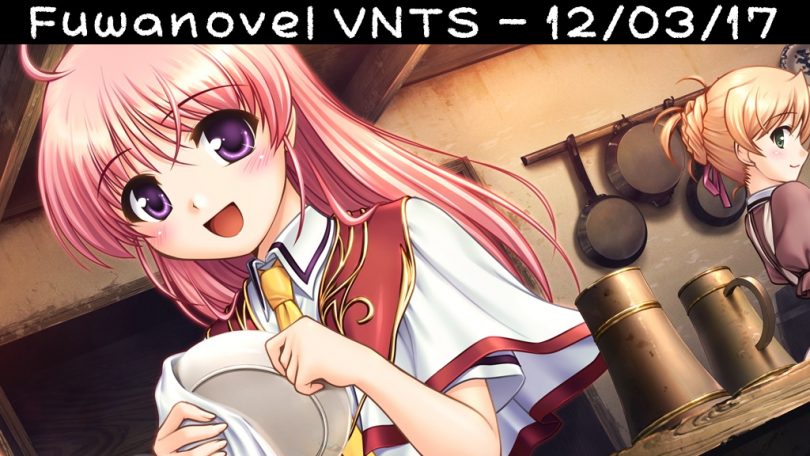 This week’s header image comes from Aiyoku no Eustia, which has no release or notable news. I just felt like it.

From The Team:  And let another late VNTS. At this rate, late will become the new normal. I’ll try not to let that happen, but you never know. No, I’m not sorry for the Eustia fake out.

Zakabox™ 「Aaah. Another day, another 16:00 awakening. Still so tired. Too bad I have to get up at nine tomorrow. Math class. Actually I promised a friend I’d detail what the fuck the math assignment I’m going to turn in then was about, so if you’re somehow actually interested, check this pastebin.

So this is a three nukige release week, huh. Nutaku continues being as terrible as expected, quof remains a cool dude, and wow Yurinate is out. I guess I got scooped on releasing the first Natsukon translation, but at least the release is relevant to my interests with the whole yuri urination thing I guess.

Regarding my SeaBed readthrough so far, I’ve mostly been really annoyed at the localization job. If you told me it were unedited, I’d probably believe you. It’s at a constant, usually subclinical level of awkwardness, with the occasional larger mess-up. I’ve also found several translation errors (you can change display languages to confirm) just by looking at the English text and thinking it odd. None of them have been very significant, but it’s a bit alarming. Overall it’s not terrible, but it certainly was way below my expectations – if you’re less discerning it might not matter to you at all. I can only speculate as to why it looks like that – lack of time? Incompetence? Silly directives from management?, but it annoys me. Other than that, well, it’s had a bit of a slow start but it’s picked up somewhat and I’m interested to see where it’ll go. For the rest you’ll have to wait for my actual review.

Other than that I joined the recent #devtalk Let’s Read of the demo for the yuri noir EVN Deliverance, and the writing as well as aesthetics were surprisingly good. It’s a pretty short demo though, so we’ll see how the whole thing does if it ever gets finished.

Decay’s MusingsIt’s super late and I’m tired so I don’t have much time to write anything here, but about Tenioha, come on. This blows. I can’t think of any good reason to remove that content. I don’t know if this was Nutaku’s decision, the original developers’, or what, but this censorship feels unnecessary and real shitty.

Just, like, look at the entire rest of the English eroge market maybe and see what is and isn’t acceptable? The mangagamer release “Eroge!” had a very similar scene and hey, guess what, it sold great. I just don’t understand this. It’s dumb as hell at best and possibly homophobic at worst. Nutaku hasn’t released a statement about this, and they really need to. What the hell are you guys doing over there?

Anyway, see you all next week.