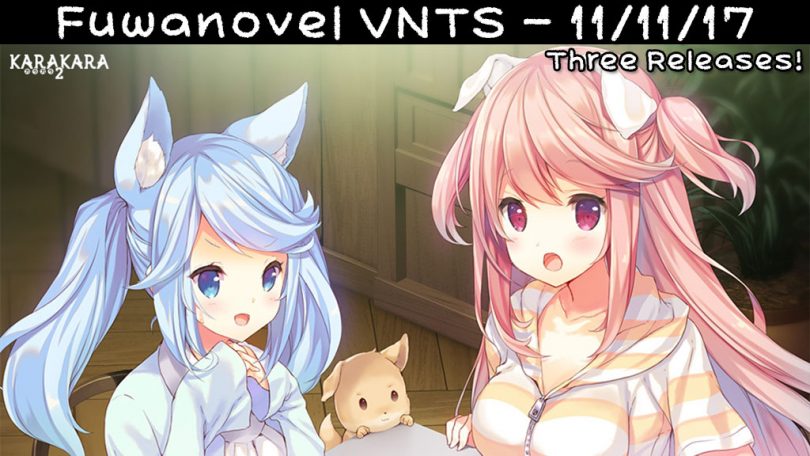 This week’s header image comes from one of this week’s releases, KARAKARA 2.

From The Team:  Hey everyone. Hope you’re enjoying all the recent releases. We’re experimenting with a new way to work on the tables this week. There should ideally be no visible change on your guys’ end. If anything seems wrong or buggy, let us know!

Zakabox™ 「I will admit, the biman patch is taking an unexpected amount of time to get finished. Maybe it’ll get done in 2020 or something w. Besides making merry about the delays, I’m not sure what to think of the whole thing. Having read some of the script the QAs got because… reasons, it looks pretty meh. Below the standards I’d have for a professional release of more or less anything, even a nukige. But like, not some kind of completely unreadable horror that actually upsets me either. The release of the fan translation will probably reduce the chances of an official loc, since less people will buy something they’ve already tried – and starting from anything but #1 brings other problems. And apparently Biman 4 has some value outside the nukige thing, or something. I don’t even know, and I’m not sure if I care. Nukige isn’t really something I read.

But professional standards in the industry are sort of out of wack anyway. Actually, maybe some companies actually would take the fan tl script if it were offered to them. Look at Little Busters released last week; as far as I can tell, it’s the weak effort me and the other loc-critical I know expected from Fruitbat. Look at Eiyuu Senki’s new, pornier release by JAST, which apparently managed to fuck up things that weren’t even fucked up in the kinda bad Fruitbat tl? Look at Aksys, who keeps fucking shit up systemically to the point where I’m starting to wonder if 999 and VLR were miracles, Ben Bateman some kind of god, or both.

Sekai Project is uneven as well, though I’m not sure if they’ve put out an actual stinker recently. Maybe SakuSaku? Some stuff there looked pretty bad, and I’m not sure why you’d ever do this but I heard that it’s possible no editor but the one for the fan translation went over it. Their latest thing I actually read something of, Wagahigh, was definitely patchy and lazy at times. With that said KARAKARA 2 has the same translator that handled the first, who seems quite good. Uneven, not uniformly bad.

I haven’t mentioned MangaGamer because they legitimately seem to have their shit together, but I feel way too biased on this topic. Maybe they really are that good, for given values of that good. But maybe even “that” good isn’t actually all that good compared to what we could reasonably demand, if we wanted. Fuck.

When it comes non-VN loc things are probably even worse; my friends were very surprised when NISA actually cared about their Ys 8 fuckup (have you heard of it, even? I’m in such a bubble…), and even that might be caused by that story being picked up by Japanese media.

But okay, I’ve probably lost half of you by now. I’m not sure if there’s much of a point in ranting about this – some people care, but will people ever care enough to make a difference? I see lots of posts complaining about typos and the occasional grammatical oddity in <insert VN here>, while completely missing anything related to awkward wording. Or they focus on one or a few trivial mistranslations without realizing that this kind of thing is almost inevitable with enough text to translate. I’m not sure if people at large are ever going to have an explicit sense for this, even as they probably do judge a narrative at least partly by its prose – just think of what Grisaia would be without koestl’s magic touch. And so I have no idea what to do, really.

Caring about this stuff doesn’t even feel like the optimal strategy for someone who never intends to either translate, edit, or QA writing in the first place. “Eh, it’s fine” annoys me, but it’s utterly understandable and maybe even optimal for the average person. So in the end, maybe all I can do is rant. It’s not like this narrative even captures everything. For one, I have no idea what the loc quality delta is at, especially if we ignore the niggling cancer that is SakuraGame’s machine translations. Maybe things are actually getting better, even if they are currently bad. And it’s not like everyone in loc’s some kind of horrible person either. The process is complex, and a fuckup at any stage will reduce the quality of the end product. It doesn’t have to be bad translators, or editors, or QA… it could be unreasonable deadlines or poor practices imposed from above, or from the Japanese company. Or, of course, a bit of everything all at once. All in all, this localization thing is hard.

Okay, rant over. So what else do we have today? Well, last week I would have recommended the then recently-released VN Lynne, had I not been too lazy to like, write things. I started writing a review, but in predictable Zaka fashion I didn’t finish it. You know what, you can have the first two paragraphs. It’s not like I’ll find another use for them ever.

Sometimes the things that terrify us are not the things that go bump in the night. Sometimes the fears that seize us are all too real, all too mundane, and no amount of reason can dispel them from our minds. In modern society, the fear of academic failure dogs students like a spectre, hovering over them in the weeks and months before exams. Prove you’re not a failure, Civilization says – this is your one chance to show you’re not a loser.

Lynne is a short, free horror visual novel written by prolific EVN author Ebi-hime. Released just in time for Halloween, it features subtly animated photofiltered backgrounds, an atmospheric soundtrack reminiscent of Saya no Uta – though the weeping, screaming guitars of SnY are notably absent in Lynne, which has an all-electronic approach – and a stress meter in the top right that grows ever higher as exams approach.

Lynne is one of the better VNs I’ve read, and it’d be nice if I stopped being the only one I know that has actually tried it. If only so you can denigrate me for my shit taste or whatever. Download it here.

In real life news I’m sure you all care about, I found out yesterday that I’d passed my Automata Theory exam, which I was worried I might have to retake. It feels good to finally be getting some academic credits again after 5 years or so of losing myself in more NEETly pursuits. Maybe I’ll actually be a productive member of society one day. Until then, or possibly just next time (you never know with how flaky I demonstrably am), adios.

P.S: I know I said my first VN translation project was slated for 2018, but maybe I accidentally managed to invoke underpromise/overdeliver for once. I’ll try to get it out within the year. All 340 lines of it.」

Decay’s MusingsGot nothing to say this week. See you all next week!