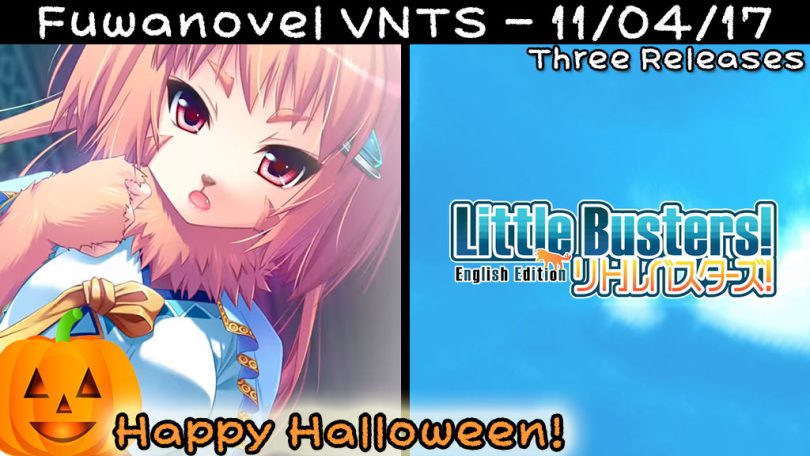 This week’s header image comes from two of our three releases: JAST’s Princess X — My Fiancee is a Monster Girl; and the Little Busters English Edition by VisualArts.

From The Team:  Special thanks goes out to Decay and Nayleen this week. Due to RL technical difficulties, Decay handled almost the entire VNTS post last week. Nayleen rushed to help me out with some technical issues related to the Reviews Team email server. I have no idea what I’d do without these guys. Much <3, fellas. – Tay

Decay’s MusingsHey everyone. It’s been a few weeks since I’ve done a commentary, so I figure I should check in. There’s been a lot of great VNs translated in the last few months, and so I’ve been playing a lot of, uh… Breath of the Wild. Oops. I’ve been at it for the past several days. That game is so massive, so impressive, and so… dangerous. I should probably force myself to stop playing it soon, otherwise who knows when I’ll stop.

I was going to try Chaos Child, but to be honest, I’ve seen some concerning things about its localization that kind of bums me out. It’s a massive game whose translation was rushed out by a single translator and it doesn’t seem very well edited; it’s littered with typos and grammatical errors. Maybe PQube will fix it in a patch. I don’t know if I want to play it before it is.

Little Busters is finally out this week, and it’s probably my favorite Key game. I loved all the characters and how off-the-wall it was. Its translation doesn’t seem too different from the many-years-old fan translation, which is honestly a little disappointing. I still managed to fall in love with the game through that translation, but I would’ve liked to have seen a bigger upgrade. LB deserves it.

The Lovely x Cation 2 news is pretty surprising. Not gonna lie, I really didn’t expect that turn of events. I feel bad about what happened with the LxC1 translation, but that series isn’t being buried for good. By all accounts I’ve read, LxC2 is a much better game than the first. Both games are pretty porn-heavy and borderline nukige, but 2 has actual substantial drama as well, especially when compared to 1. I wish Quof the best with that translation.

And for a little behind-the-scenes talk, man, today’s update was a thing. Specifically, the table plugin for wordpress we’re using has been making things really difficult when importing the tables from google sheets. Tonight’s fun surprise was when it converted all percent signs into really long hexadecimal strings, which I had to manually fix.  If things carry on like this, we are going to have to find a new way to deliver to you all your weekly updates. I’m gonna see if we can experiment a little next week and hopefully find a better way to work with this plugin and keep things as they are for you all.