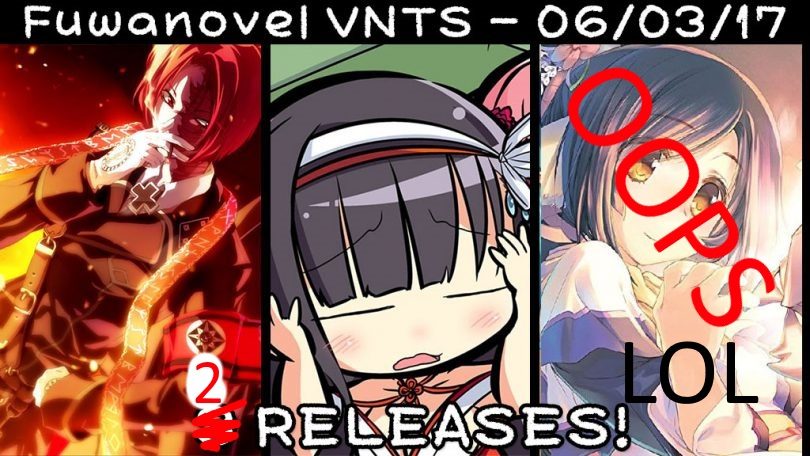 From The Team:  I’m back! And alive! And very, very thankful for Decay’s help the last few weeks. He’s a champ. And it’s a good week to be a VN reader, too: three releases, including the much-looked-forward-to Dies Irae. Any of you playing it out there? –Tay

Decay note: I in no way made a mistake that would lead Tay into believing that Utawarerumono came out this week. Nope. Nor do we have it in our banner or have already mentioned it twice already this post. I don’t know what you’re talking about. These things haven’t happened. (for real though it’s all my fault)

Decay’s MusingsBoy am ever I glad to have Tay back. Unfortunately for him, he has to contend with me constantly forgetting to remove the “new” status from unupdated entries. Luckily for him, however, I was here to fix that screw-up in a 100% seamless manner. Now everything is just perfect.

As you may have guessed, I’ve been a little immersed in Dies irae these last two days. I’ve already logged over 10 hours into it, and apparently I’m only just barely halfway through the common route? Yeesh. This one’s gonna take a while, which is a little scary considering the capricious nature of my attention span. Maybe I’ll finish it, maybe I won’t. Who knows!

I am enjoying what I’ve read so far. I don’t want to say too much about its themes and all that until I’m further in, but I will say that so far, it’s basically as advertised. There’s well-paced action, a whole shitload of characters all with their own hidden motivations, maniacally evil nazi-esque villains you really want to punch, impenetrably cryptic philosophical discussions, and German and Latin-inspired fantasy jargon up the wazoo.

And for the most part, the translation handles it well. When the narration and dialogue gets incredibly verbose, the translation gives off that pretentiousness very well. You really get a feeling for how far up their own asses these characters are. The action is written well, giving you a good sense of everything happening while still keeping it exciting. And the translation is funny when it’s time to be that, too. If I have any issues, it’s that there’s a greater than typical rate of typos and minor grammatical errors, and that there are what I perceive to be occasional tonal inconsistencies—characters wording things in ways that feel out of character and that kind of stuff. The average reader is unlikely to notice this much, and the work is overall still very enjoyable.

Dies irae’s release format sure stirred up a lot of controversy though, huh? People have this extreme fear of DLC ingrained to them at this point, where the mere mention of it will spark huge reddit threads and twitter outrages, no matter the context. In this case, I think this is a very consumer-friendly approach. A gigantic 20-ish hour chunk of the game is free for everyone, and the two “acts” that comprise the entire game are affordably priced. My only complaint as a consumer is that the acts are organized in the order they were initially released in Japan, and not in the recommended reading order. That’s bound to confuse some.

There’s some debate as to whether or not this is a smart business move, which only time will tell us if it is. Light most likely saw that 100,000 people booted up Chusingura and wanted that many eyes on Dies irae. How well CSG was able to convert those freeloaders to paying customers is data that is not available on Steamspy or anywhere else, so it’s hard to predict how DI will fare.

The optimist says that for a budding genre, a free entry point could do wonders to attract a viable market. The pessimist says that most Steam users don’t spend much time on any one VN release, so they’re liable to get their fill by the time the extensive DI common route is over and move on. Both points are perfectly valid, and I honestly have no idea how this will turn out. Hopefully at the very least, well enough that we get to see other Light games released in English.

TAYsteful Thoughts™I’ve been out of commission for a few weeks, now, and I’m even more behind than normal. For those who keep an unhealthily close eye on Fuwa, you’ll be happy to know that the Forums are fixed up and the front site is halfway re-worked. Still need to add a bazillion games to the site, though.

I want to highlight what may be the greatest thing in the world: Rabu Rabu TL’s dynamic progress tracker for Lover Able. It’s glorious, and it makes my life as a VNTS-er so much easier. THANK YOU! 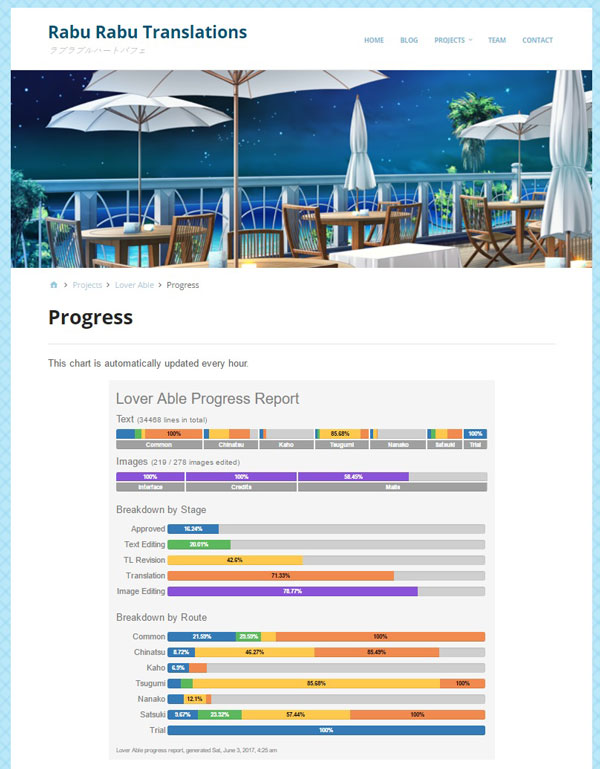 I think I’m in love.

Give me a day or two and then I’ll be ready for a powwow. Until then, have a good week, everybody!