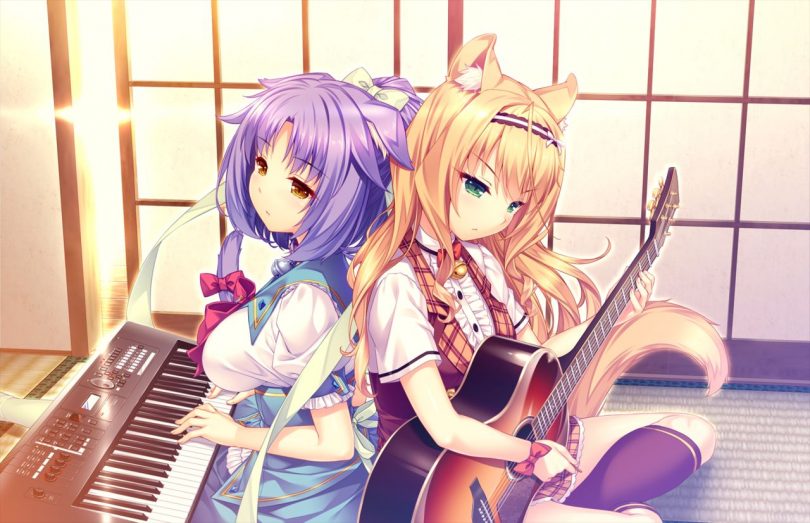 This week’s header image comes NekoPara Vol. 3, one of the two releases this week.

From The Team:  Hey everyone! Sorry for yet another late VNTS. Circumstances are hectic and a little confusing, but nothing can completely stop us! Hopefully things will settle down and we can get back into our Saturday morning release groove, though I can’t make any estimates as to when that will be.

Decay’s MusingsThroughout the VNTS’s history, we’ve always tried to keep an air of neutrality. We’ll sometimes gush about VNs we’re enjoying, or will complain a little in our commentary, but we generally want the translations and VNs listed here to speak for themselves. This is not out of some sense of journalistic integrity or some such nonsense; this is merely because there’s no way to please everyone when you get overly opinionated, and we want these to be informative posts everyone can reference without having someone else’s standards shoved in their faces.

Two weeks ago, I broke this unwritten rule of ours when I issued a warning for Taisho x Alice in the list itself. That was a release of abysmal quality, not fit for human consumption. It didn’t matter what your tastes or standards were, Taisho x Alice was not a VN you wanted to buy. I would have felt guilty—almost complicit in E2’s scam, really—had I not issued that warning.

And coming up probably very soon, I will be tempted to do this again upon Libra of the Vampire Princess’s release. I’m sorry to say, but its level of translation quality is exceptionally poor. As in, almost If My Heart Had Wings levels of poor. The warning signs started early during their Kickstarter campaign when the translators declared that leaving the japanese word “desu” in the English script was a smart way to translate one of the heroine’s speech quirks. It is not, of course, and they eventually did change it, but it was still a concerning first showing from them. Then I started hearing all sorts of buzz about the translation throughout the last year from various sources. It was never positive, but I thought hey, it can’t be THAT bad, can it? And now the game is getting into the hands of Kickstarter backers, and hoo boy, it is “that bad.” It is actually much worse than “that bad.”

You can see me tear into the translation here, with example lines and explanations of what’s wrong. I don’t have anything kind to say about it at all. At this point, I have to very strongly recommend that you do not buy this VN. Mikandi Japan has done an large disservice to the English community by taking our money on good faith and then crapping out this abomination. If you purchase this VN, you potentially support the degradation of the English VN localization market.

Companies like E2 Gaming need to be kept as far away from the VN scene as possible. Mikandi Japan however doesn’t feel like a scam in that same way; it seems likely that they wanted to produce a decent product, but botched it along the way. In this sense, it feels like they have room to grow. Just look at where MangaGamer was when they started, and where they are now. However, the odds of this happening with any given negligent company is astonishingly low. And so throwing good money after bad at Mikandi in hopes of a grand reform is downright irresponsible.

There are also aspects of their business model that has always seemed a little scummy to me. They’ve yet to release any product to the public at large, yet they’re constantly hawking pre-orders and a whole mess of merchandise. They want your money for the game of course, but also for t-shirts, posters, keychains, blankets, the works. They’ll even take your money for nothing at all in return—they have a donation option, something they advertise quite frequently on twitter. And all that merchandise money for what? One of the worst official translations released since If My Heart Had Wings? Sorry if I don’t sound very eager to support these guys.

Do not donate to companies who are unable to do right by their paying customers, and definitely do not buy Libra of the Vampire Princess unless you want to perpetuate a culture of shoddy official translations from people so interested in nickel and diming you.