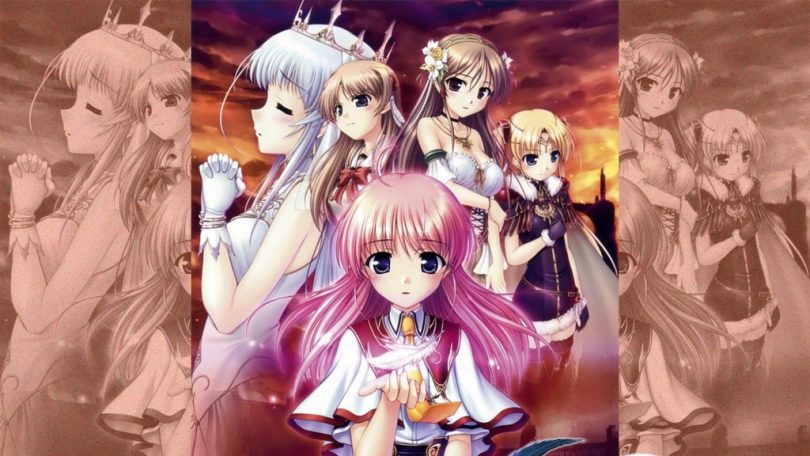 This week’s header image comes from Aiyoku no Eustia, a fan TL project we added to the table this week!

From The Team:  Tay wanted to cancel this week’s VNTS and I was having none of it. Luckily, he passed out from the exhaustion and stress of his heavy real-life responsibilities, allowing me to do as I please! So here’s a rogue VNTS update coming right at ya! Who’s gonna stop me? (Also, seriously, please give all your energy to Tay, he needs it!)

Zakabox™ 「To start, I’d like to congratulate Verde for getting Fashioning Little Miss Three… uhm, Miss Lonesome to 97% translated (edit: nope, she’s actually completely done. Why’d I write this dang thing on Friday, anyway?). She’s really swamped with work and life atm, and I admire her ability to not just get destroyed like I would probably be, lol. Also she’s cute, but she knows that already!

When it comes to my fan translation “career”, apparently our more worldly cousin thought our name, Sekkai Project, was a bit overly meddlesome, so the group translating Maki Fes is now known as “Bueeh?! Translations, Though“. I’m probably saltier about this than I have any right to be. The though is officially part of the name, so have fun fitting that into whatever you write about us, O totally existent VN journalists reporting on nukige fan patches (wait, that’s us vnts writers. shit).

After a super duper heroic effort from me where I probably translated like, AT LEAST THIRTY lines per day (for two days!), and a middling effort where tbac TLCd like everything and translated his own script too jeez man, we can safely say that unless we get stuck in editing or QC – and considering we’ve got the formidable Ryechu on our team, at least editing should be smooth – we should be able to release the patch on Maki’s birthday, the 19th of April, and that I really should have split this into two or more sentences instead of abusing the poor en dash.

If you only feel like playing one scene, I recommend the bottom right choice; it’s the scene I translated. While our tlc killed quite a few memes in other scripts, he spared most of mine… including some that have received near-universal praise on the Twitters and such. I should note that I’m using the looser definition of “meme translation” here – really you could call it part troll, part joke, and all part of the fun while still mostly maintaining the meaning of the original line.

…y’know, translating short stuff can be surprisingly fun. I might come out with a certain other thing under 500 lines at some point this year, though knowing me, I will give no guarantees. I only have like 40 lines left to translate, though, so at this point maybe someone actually should kick me up the arse. And having affixed that ominous sign to my posterior… I bid thee adieu for today.」

Decay’s MusingsI couldn’t let a week go by without a VNTS. I said it before and I’ll say it again, I will ensure our VNTS arrives at your doorstep every week unless our servers are literally on fire. And even then, we’ll find a way. Maybe the day for me to move on will eventually come, but that ain’t any time soon.

Kinda sad to see a week without any releases, but maybe that’s for the best considering everyone and their mother are playing Persona 5 right now. I’ve already logged around 25 hours in and yup, I’m addicted again. Even as someone who has been an avid gamer for 25 years, Persona 4 became one of my favorite games of all time. Will P5 surpass it? So far it’s fun and addicting as hell with loads of improvements over P4, but I’m not feeling the cast quite as much. I’m “only” 25 hours in right now and haven’t met a lot the main cast yet, though, so I’m really eager to see how things develop from here. People seem to be liking it a lot, though, which I’m glad to see.

On top of P5, a new hearthstone expansion released, and a new Europa Universalis IV expansion released. So yeah, I got pretty much zero VN reading and editing done last week. It’s getting hard to tell what the next major release will be. SP has hinted in the past that a WagaHigh release was imminent, but it seems that’s taking a bit longer to get out the door than expected. MangaGamer also has a variety of games sitting at 100% with no reported technical/porting progress, so I’m not really sure what’s up with them.

Meanwhile, VisualArts is teasing Little Busters. It looks like we might actually be getting that in the near future. I suspect that’s going to be a huge release when it hits. I’m sensing more hype for it than I did for Clannad, and the English OP they posted to Youtube got over 10k views in a week, which is really impressive for a promotional video for a VN. I know I want to revisit it, both to see the new content and to see if I like the old stuff as much as I remember.

Well, back to P5 for me. Gotta clear up some Mementos quests!