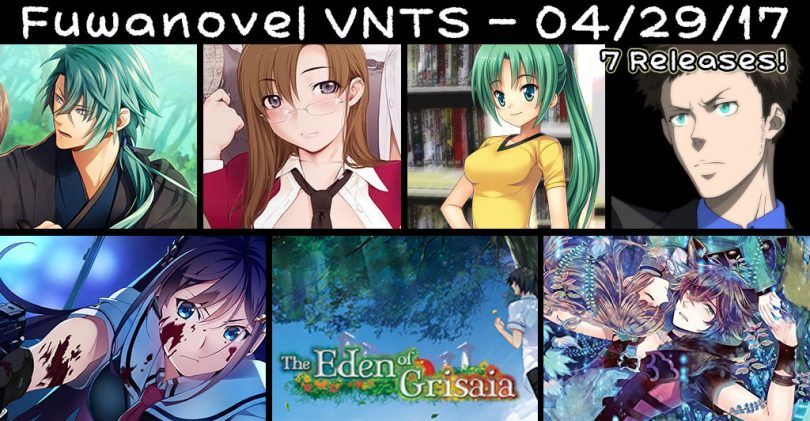 This week’s header image comes from seven of our EIGHT releases! Check out the full list below!

From The Team:  Seven releases and a glut of updates. What a week! If you’re finishing up final exams and are looking for something fun to do, I’d say the universe is sending you a message.  In unrelated news… all I can say is that it’s about time we finally heard from the Dracu Riot guys. It’s impossible to track them down — I have literally no way of getting in touch with them, no back-door communications with their dictatorial editors — and their silence has been deafening. < 3 – Tay

(Spoiler alert: Decay is still editing everything from the carpets to the drapes, and Clephas is the hero of the People’s Revolution. Anyway. Seven releases. Yay!)

Decay’s MusingsA triple Grisaia release week, what a time to be alive. As much as I groused about Eden not being released in a timely manner, I guess I’m at least happy they managed to get it out the door on the same day as Phantom Trigger. If you haven’t watched the anime and have only been following the visual novels, then you almost certainly don’t want to read Phantom Trigger before Eden. There may be an all-new cast for PT, but it is still based off of what happens in Eden, and playing PT first will spoil those story beats. We were almost about to enter a very strange zone where a partial story sequel was out before its predecessor. Not that them coming out on the same day sounds like the wisest of business moves, but hey, literally what do I know? About business, nothing.

So I’m excited about Eden for sure. I’m aware of its common criticisms and don’t mind so much. I’ve never been more ready for an abrupt tonal shift into ridiculous Hollywood action in my life. I don’t care about the 18+ version either, so I’ll probably pick Eden up pretty soon. Phantom Trigger I’m a bit less excited about. I’ll probably still read it, but I’m a little concerned about its nature as a series of super short episodes. I’ve heard that chapter 1 clocked in at a little over three hours, which just seems like a poor value for $15. It also makes me wonder how complete its story can be, and more importantly, how fleshed out the characters can feel with that short of a VN. Other attempts at this formula have resulted in some fairly shallow works, hopefully Phantom Trigger can rise above the lot and do something great.

I’m also pretty excited about the possibility of a Tsujidou-san no Jun’ai Road translation. That VN has been near the top of my translation wishlist pretty much since I started reading VNs. I only hope that the group tackling it can do it justice. It has a colorful script that mandates a lot of creativity in your translation and editing, and to be honest what I saw of the Hatsukoi 1/1 translation seems kinda stiff (though I haven’t seen anything other than the initial common route patch). Best of luck to them, though. They’re rushing though Hatsukoi hyper fast, but I suggest that they slow down and take a bit more time with Tsujidou-san so it comes out just right.

There’s just something about delinquent girls though, you know? Nothing makes me fall in love with a character more than a good “Fuck the system, fuck the man!” attitude. I’m not weird, am I? Though I’m reminded of a certain supposedly anti-establishment game I’ve recently played that ended up watering down its message as much as possible, at every possible moment… *cough*Persona5*cough*

Anyway, next week and possibly the two after that will be 100% Decay VNTSes! I hope you’re ready for shoddy header images and way more missed status reports. See you all then!