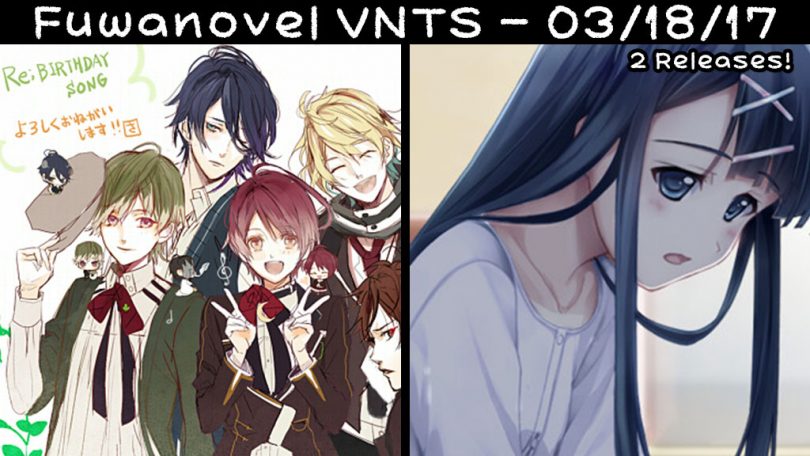 This week’s header image comes from our two releases: RE: Birthday Song (VNDB; Release) and Narcissu Sumire (VNDB; Steam), which is the last piece of the Narcissu 10th Anniversary Project on PC.

From The Team:  Sorry for the delay on today’s post! I want to congratulate our friends over at Otome Adventures for completing and releasing their Re:Birthday Song patch. It’s been a wild ride, and a patch release is an exciting moment. Also note that Narcissu Sumire was released, which fully completes the Narcissu 10th Anniversary project on Steam.

Decay’s MusingsHello everyone! Sorry for the short commentary this week, but there’s no time for a normal one, we’re delivering this post to you piping hot! Some quick thoughts for the week.

1) I’m glad to see the Narcissu 10th Anniversary Project finally completed. I may actually give that series a shot now. Or so I thought, until I saw the translator saying that he’s thinking of redoing parts of 1 and 2’s translation. At this point I’ll never find a good time to hop on board.

4) We added Whirlpool’s upcoming English release, two weeks late. Oops! It seems to be a pretty porny game so it’s weird that there’s no 18+ version announced. I suspect that one will get announced eventually, once their actual localization partner surfaces and makes an announcement (assuming they have one and aren’t doing this internally).

TAYsteful Thoughts™ Already late to publish today’s entry, so not going to write commentary this week. Hope everyone is well and surviving exams. Congrats, again, to Otome Adventures and their release of RE: Birthday Party. Have a good week, everybody!