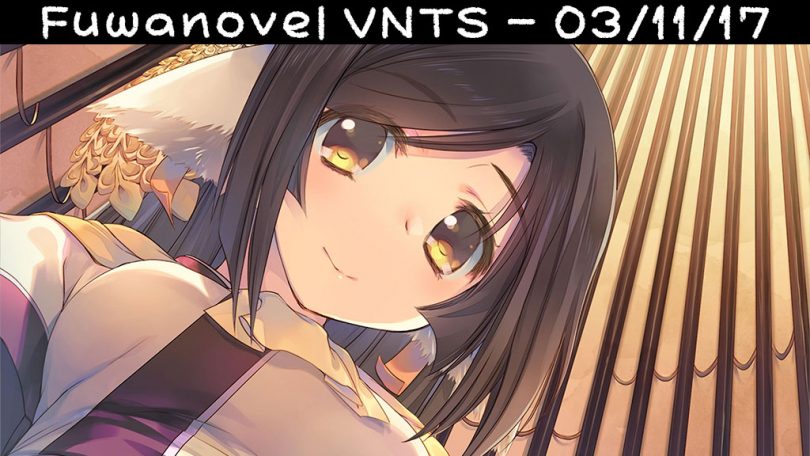 This week’s header image comes from Utawarerumono: Mask of Deception/Mask of Truth which, we learned this week, is coming to the PS4/Vita in NA/EU on May 23rd courtesy of Atlus!

From The Team:  A bit of an anemic week this week! That said, we learned that Atlus is bringing Utawarerumono: Mask of Deception/Mask of Truth to the PS4/Vita in NA/EU on May 23rd (pretty cool, guys!). A bunch of updates from Fan and Licensed translations, alike, as well, so dig in and enjoy this week’s VNTS post!

Decay’s MusingsHey everyone! I’m finally riding the waves of the future. That’s right, I got myself a PS4, my first console since the PS2, believe it or not. And to top it off, I grabbed myself a new monitor capable of a whopping thousand and eighty p’s! Up until now, I’ve been making do with a rather low-end 1680 x 1050 display for the last seven years, which has slowly but surely been gaining an orange tint. This isn’t necessarily a big step up, but I needed something that the PS4 worked well with, and it’s pretty great having a multi-monitor setup now.

I mainly bought the PS4 for Persona 5 and Yakuza 0, but it’ll be nice to be able to play the upcoming console-exclusive VNs like Utawarerumono and Chaos;Child (unconfirmed but some firm leaks are out there). Speaking of, Utawarerumono has a release date! I never finished the first game, but I’ve heard some fantastic things about the Mask duology, so I should dust off my rusty save and give it another go. It wasn’t bad, I just had a million other things I was doing instead, as usual.

Outside of that, it’s a pretty slow week. I’m still plinking away at Chrono Clock. I hope to have a review up by this time next week, though. In short, it’s pretty good, but not exceptional. It’s worth playing if you enjoy slice of life romance. I’ll have more to say in the review, obviously, so stay tuned for that.

Time for me to hit the sack. Have a good one, everyone.

TAYsteful Thoughts™I get a lot of Fuwanovel-related email. Enough that I’ve had to build a complicated web of forwarding so that review keys, for example, make it out of the abyss of my inbox and into the hands of our Reviews Team. If I let up for even a day (let alone a few days, such as exam weeks), the numbers skyrocket. What I’m getting at is that I struggle to keep up with my email, and I know it, and I’m sorry. I missed an email from an undergraduate student in the Congo last week, and by the time I got back to him, he didn’t have sufficient time for his project and had to choose something else. Similar situations (mostly involving undergrads) have happened in the past, and I felt (and feel) pretty bad about each one. I ask for your understanding: keeping Fuwa up and running for everybody takes a lot of work, and I only have so much time outside my studies/work/research to spare. Apologies all around.