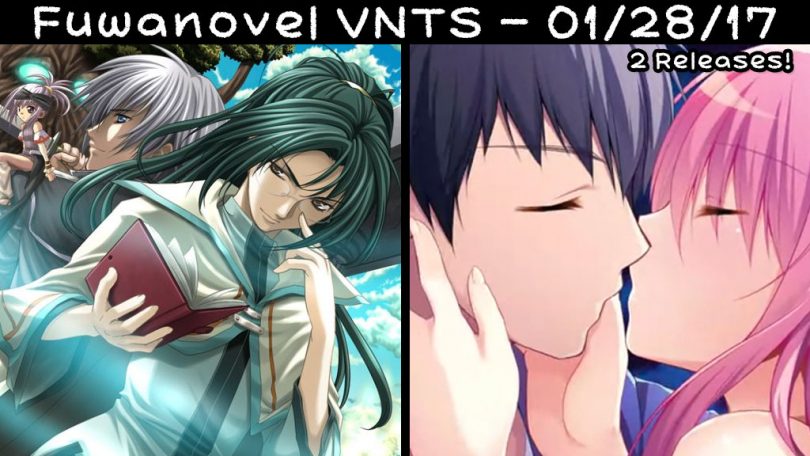 This week’s header image comes from our two releases: Corona Blossom Volume 3, and Seinarukana -The Spirit of Eternity Sword 2

From The Team:  Two releases this week! We’ve got Corona Blossom Volume 3 (on Steam, 18+ patch on JAST), and Seinarukana -The Spirit of Eternity Sword 2- on Steam. Seinarukana has some new features, so be sure to check them out. Anybody playing them right now? What do you think so far? I’m still working through Da Capo 3’s Ricca route (released last week), so I probably won’t pick them up quite yet. – Tay

Zakabox™ 「I write this from a hell of somewhat my own making; the time is 14:00, and I really want to sleep. But then I’ll have to wake up for dinner in four more hours, and then be awake for like two, and then sleep again and somehow… by the way, did I mention I really want to try to get to a normal Swedish circadian rhythm if possible for potential work later on, and that this will likely make me miserable? Fuck everything.

…Oh, this is a visual novel website or something. I had forgotten for a moment.

Corona Blossom’s third episode is out. I wonder if it’s the last one period; while there were originally 3 parts planned, trilogies do have a tendency to be flexible. If it really is done, I guess those of you who refuse to touch something unfinished may now consider the series again. I… haven’t tried any of it and nobody’s recommended it to me very strongly, so my personal interest is low. Should it be? Do tell if you enjoyed it.

The tale of Kurukuru Fanatic saddens me because it seems like anti-porn culture contributed to the end of the project. It’s hard to tell exactly how much the effect was based on the tweets, but I get the feeling that there was something pretty painful behind it given what darkeye tweeted. I could be completely wrong! Either way, darkeye exited admirably by providing the scripts; hopefully their work will not go to waste. I see people trying to organize a project already in the forums; we’ll see how far that gets. More than one project either has been successfully completed by others (majikoi) or is likely to (dracu-riot, based on what I hear), but everything depends on being popular and lucky enough to garner tbe required support – look at Akai Ito for somewhat of a counterexample, though I’m still holding out some hope for it.

Evangile’s fandisc is getting there. Maybe one day I’ll read the VN, though I should probably finish Majikoi first (if TakaJun’s translation doesn’t kill me first – I hope this thing gets a proper localization edit at some point, because damn it needs one). Anecdotes aside I know this is highly anticipated by some people, and that I’m not one of them, so uhh happy news to people that are not me.

Pygmalion is an interesting title because it’s been saddled with both disappointment (for the company it’s from, compared to Tokyo Babel, etc) and praise (for its quality when compared to average works?). It’s hard for me to really evaluate, but chuuni does interest me, so I’ll maybe give it a try.

…In closing, the loser side semifinals of a friendly hearthstone tournament I’m in is finally happening, so maybe I’ll be able to win the finals soon enough. Or lose for the first time. That would be embarrassing. Wish me luck!」

Decay’s MusingsHi all, it is I, the one who forgot about the VNTS commentary on three separate occasions tonight! Instead of writing commentary, I was talking to people about Da Capo 3. Specifically, the translation. I’m involved in VN translation myself now, I’ve seen how the sausage gets made. And as a result, I doubt I’ll ever look at translations the same way again.

I’ll refrain from making a judgment call on the translation’s overall quality since I’ve seen very little of the game (just 2-3 hours). That’s not gonna stop me from letting a lot of little things bother me, though. I’d say that the general feeling the translation gives me is that it’s just kinda plain. Lifeless, at times. Perhaps that’s a reflection of Kouryuu’s stressed mental state during the time he spent translating. Or perhaps that’s simply how the VN was originally written. In either case, it’s hard not to feel for Kouryuu when you read his recent blog post about what he went through to get this translation done.

The translation discussion I referenced earlier was specifically about this line. To be honest, I’m still not 100% sure what exactly it’s trying to say even after talking about it for a while. Part of the problem is that it’s using words and phrases in ways they’re never used in English. Often times, words that have direct and easy translations in some contexts won’t in other contexts. “Consideration” is one such word, and “the mood” is another concept that often feels strange and foreign when directly carried over to English.  A simple request to all translators and editors: Please think about how the words you’re writing are used in the language you’re writing in. This pratfall is all too common among inexperienced translators who overly rely on direct translations.

That’s a line that simply fell through the cracks in the polishing process. Mistakes happen, especially in VNs as large as DC3. The rest of the translation seems fine, just kinda plain as I said. It seems a lot of the prologue’s translation is actually carried over from when Kouryuu translated the anime. I hope that past the prologue, the writing gets a bit more creative and interesting. At least the VN seems to be selling well, it’s currently going toe to toe in a battle against Rance, and winning. Here’s hoping it keeps that up.

I’d also like to give some shoutouts to two different crowdfunding campaigns on Kimochi with involvement from Fuwanovel community members. TsukiWare, creators of the yaoi VN Critical Hit, are currently seeking support for their two upcoming yuri titles, The Tower of Five Hearts and Virtual Ro:Mance (NSFW). My good friend Ryechu is the writer on Ro:Mance. They’re both cute looking, so check them out!

The other crowdfunding campaign comes from Fuwanovel member dfbreezy, Episicava (also NSFW). This one promises to be a much meatier experience, inspired by chuuni action titles such as Fate/Stay Night. The art is solid and the story seems interesting, so be sure to check it out!

TAYsteful Thoughts™So what’s everybody playing these days? I’m back into an uncomfortably busy schedule, so my free time (much less my VN time) is limited. That said, I’ve managed to get in a little time with Da Capo 3, and I’ve found it to be… fine? I’ve had some genuinely funny moments — almost all of which involve Ricca — but I’m not very impressed with the cast of characters thus far. Oh, and the protagonist/player character is bland. So far, at least. Let’s hope he perks up, and the characters develop past tropes.

So, yeah! I’d love to hear what you’re playing, and what you think of it so far. If any of you are playing DC 3, drop a comment and tell me how you feel about it so far. Have a good week, everybody!

PS: GOOD LORD Pierce Brown’s Red Rising Trilogy is good. Like. Really good. I finished Book 1 (Red Rising) last weekend and proceeded to devour books 2 and 3 this week (at the cost of much sleep and many Bothans). I haven’t been so completely absorbed by a book series in ages. It was wonderful. Rooke, if you’re reading this, email me. I bought you a copy of the first book. For everyone else: look it up, and consider giving it a shot.