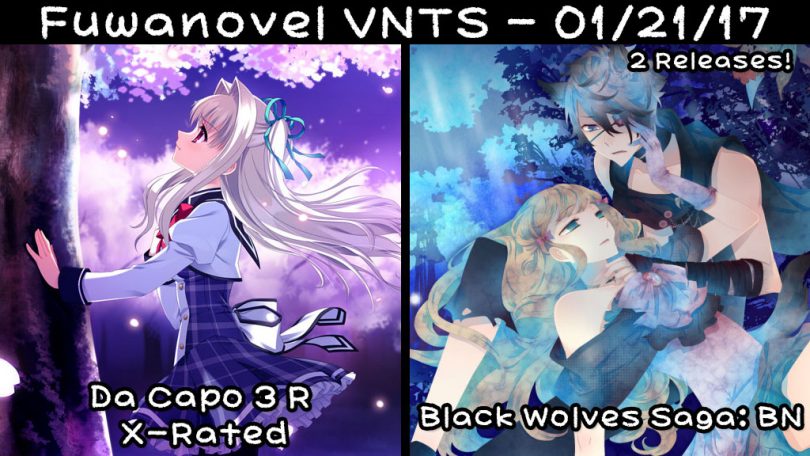 From The Team:  The release of Da Capo 3 R (18+) has been a long time in coming, and has a special significance to our community. Some of us were around when the DC3 fan translation patch was started in 2012-13, only to go down in legal flames shortly thereafter. That it’s finally coming to market is a bit surreal. I’d like to congratulate everyone who worked on the game for their hard work. I also raise a glass to Aaeru, wherever she may be. The day’s finally come. Cheers.

Note: We missed “School of Talent” until after the tables were finalized, it will be added next week:

Decay’s MusingsHey everyone. Not gonna lie, I just straight up forgot about commentary this week, whoops! It’s improvisation time! So, that Himawari, huh? My extremely late Himawari review is finally live, and it sparked more discussion than any of my other reviews, even the 1/5 No One But You review. I suppose I don’t like Himawari as much as a lot of people do. I expected more pushback than I got, but I actually ended up receiving a lot feedback from like-minded individuals.

I don’t hate the game, 3/5 is a perfectly decent score any way you look at it, yet at the same time I hesitate to call the game decent. I don’t know what to call it, truth be told. It’s sometimes fantastic, sometimes quite mediocre, a “mixed bag,” if you will. What’s interesting though is the diversity in opinions from the people who agree with my overall assessment. Many of us agree that Himawari is inconsistent and a little bit messy, but we all seem to disagree on why. I really liked chapter 2 but disliked the Aqua route, while someone else who commented on my review loved the Aqua route but hated chapter 2. Another disatisfied reader really liked the side stories, while I found them to be lackluster and a bad inclusion.

Overall, I’m still glad I read it. And I’m definitely not alone in that. It’s getting pretty crazy ratings on VNDB and has been very successful in Conjueror’s GOTY polls (he admits a likely bias among his followers since he’s one of Himawari’s translators). It’s so popular, that I wish I could have included a bit in my review where it says something like “But it does this thing right so check it out if you like that,” or “definitely give it a read if you like these kinds of games,” but I legitimately can’t figure out any way to recommend it to anyone at all. It’s strange, because the overall product isn’t bad, per say. It’s just that it doesn’t do some things right and some things wrong. In a way, it does everything right, and also everything wrong, all at different points.

Yet there are definitely people out there who unabashedly love nearly every aspect of it. I can’t really wrap my head around that mindset, truth be told. I’m not saying they’re wrong, and I respect their opinion. But if they’re not wrong, wouldn’t that make me wrong? Ah, huh, hmm… Nah, impossible.

Anyway, I’d like to go out of my way to mention this strange thing that popped up on Steam recently: School of Talent: SUZU-ROUTE.

Anyway, that’s it from me. See you all next week.

TAYsteful Thoughts™My copy of Da Capo III is downloading in the background (MangaGamer’s downloads are usually pretty good for me, but at the moment it’s moving at a snail’s pace), but I’m very much looking forward to playing it. Once again, congrats to the team for their hard work and finishing the patch.

I mentioned it in the various lists and tables, but I want to thank Mochisato, again, for the head’s up about the Black Wolves Saga: BN release. These VNTS posts take a lot of time to write, and often I have to rely heavily on Decay and the comments section for direction to new projects. If you know of a project and want us to consider it for the list, please speak up in the comments! Other than that… I guess that’s it! Have a good week, everybody!