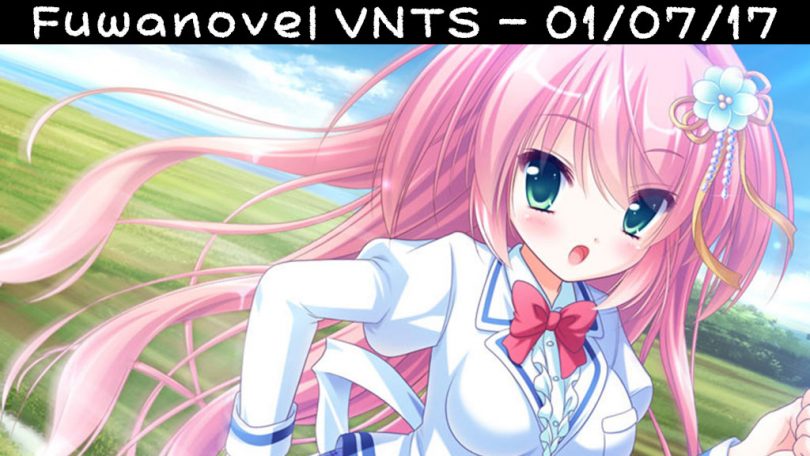 This week’s header image comes from Harumade, Kururu. (Sumikko Soft) which will receive an official version (18+ and all-ages).

From The Team:  Happy New Year (again) everyone! I don’t know about you, but my life has taken some rapid and strange turns in 2017. Anyone else having a crazy start to 2017? By way of announcements, just be aware that my RL craziness has delayed the launch of some stuff (surveys, the original VN tracker, etc.), but you’ll see them soon. Assuming, of course, I can get reliable internet access.

Zakabox™ 「I’m not sure if I’m gonna write anything much here when I wake up again in like ten hours, but for now: I spent way too much time and memes TLing 50 liens of Maki Fes, just so progress could be a lovely 69% in time for VNTS. I should finish asu owaru sekai already, it’s ez compared to this…」

Decay’s MusingsHey all. I’m back to go over all the exciting events this week such as… well… Okay, pretty much nothing ever happens at this time of year. So instead, let’s look at what happened last year! Conjueror is holding another one of this tournaments, this time to determine the best translated VN release of 2016, check it out here.

I’ll also do a “VNs of 2017” post sometime in the next week like I did last year. An unfortunate amount of titles will repeat again this year. I’d say that I’ll try better this year, but I’m not really sure what I can do better, considering the number of >80% projects that didn’t make it. Time to bust out the tarot cards and engage in some good old divination? I suppose that almost everything official that’s announced is actually really likely to release this year, just because they’re further along than last year’s titles. I guess we’ll see.

Next week we will be conducting our new year’s VNTS purge. I think we’ll likely have a lot fewer removed projects than we did last year. There’s still a few we’re eyeballing, though. The most painful removal might be Brother Conflict Passion Pink. Anyone know what’s going on with that? There hasn’t been an update in a year, yet it’s at 100%. It’s always sad to see a project fall apart so close to the finish line, so I hope they’re actually still alive and close to release.

Anyway, that’s it for us. Closing off with the Twitch Stream of the Week, enjoy some robot love.

TAYsteful Thoughts™You know, looking at the color and typography of these posts, I’ve gotta hand it to myself: the shade of purple I picked is pretty damn fabulous. It’s a great color in general — my favorite, truth be told — but this shade… Mmmmm. There’s just something about it. Dignified. Understated. Regal.

How did y’all celebrate the New Year? Do anything fun? Well, until next time. Have a good week, everybody!