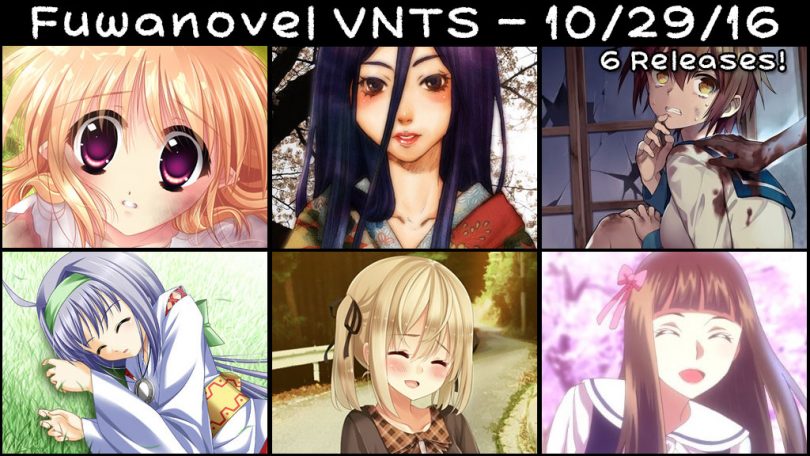 This week’s header image comes from our six of our seven releases (including one 3DS version, and one late addition), starting from the top left in clockwise order:

Happy Halloween… on Monday! Okay, so, if you didn’t tell us last week, let us know what you’re dressing up as come All Hallows’ Evening!

Removed from the Lists This Week

Boy, this sure was a busy week. Seven releases are a lot. And I’m not particularly pumped to play any of them, oddly enough. They all seem fine, except for Dragon Girl, but I just can’t really get excited about them. I think I might play Myth some day but not anytime soon. The freeware doujin thing looks like the kinda simple quality you’d expect from such a thing. Dragon Girl has a pretty abominable-looking translation and it’s a porn-heavy game with the porn taken out and no 18+ option. Ne no Kami looks pretty good if you’re into that kind of thing but I’m not actually into Japanese  mythology/fantasy. Root Letter I’ve heard some very mixed things about and I don’t have a console anyway. And Corpse Party has had a billion releases so far. Apparently this is the best version of that game? I’m just not really into Japanese horror.

Yeesh, what big old fat blob of apathy that above paragraph is. I can tell you what does look exciting: Memory’s Dogma. I really like what I’ve seen of that so far. I haven’t tried the demo yet, but I’m eager to see it and what the rest of the first chapter looks like. I hope they manage to execute on the concept well. The early impressions I’ve seen have been positive.

And Steins;Gate 0 comes out in a month! That’s something I just might have to buy a PS4 for. Well, that, Persona 5, and a bunch of other stuff. It’s actually kind of tough for me to scrape together the cash for a console though, especially since I also wanted to upgrade my computer. But the siren song of Steins;Gate calls, and I can’t ignore it. S;G is easily my favorite visual novel, just as Persona is my favorite JRPG series; it would be mad for me to not get a PS4 at this point. Time to start pinching those pennies and start up my healthy diet of daily ramen again.

The Dies irae kickstarter is also happening soon. How soon? Well, supposedly within the next few days, but apparently the message on their site is kind of weirdly worded and not 100% conclusive. Basically, don’t be surprised if it doesn’t happen until next month or later, or maybe even expect it. Still, if the rumored crew of Conjueror, Garejei, Steiner, and GundamAce are indeed the translators, that’s a project they have been worked on for quite some time now and is probably nearing completion if it’s not already fully translated. A kickstarter very soon and a release not terribly far behind it wouldn’t be totally unexpected. I just hope they bother marketing it beyond occasional posts on their Japanese blog.

Oh yeah, and Corona Blossom Vol 2. We almost forgot about this new release, but we managed to sneak it in just in the nick of time (hence the lack of a banner spot). To be honest I don’t know anything about this series except that the purple haired girl never wears panties in the promo art. She’s a space pirate, right? Is that just the space pirate fashion? Is that part of the Metroid canon? Pretty sure I’ve never seen any of them wear panties either, now that I think about it. I guess that settles it, space pirates never wear panties.

I have but one thing to say this week: