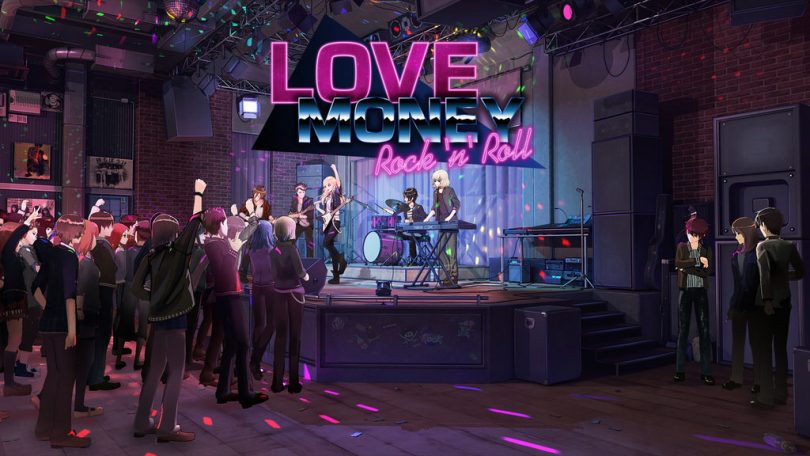 I’ve had mixed feelings on western visual novels for almost as long as I’ve been a VN reader. Part of the issue is that I value polish and production value highly, and the amateurish qualities of many western VNs can be off-putting. And then there’s how many western VNs are content aping their Japanese counterparts almost exactly, just with lower budgets. Every once in a while you find a cool western VN doing its own thing, but it turns out to be little more than a brief novelty, or maybe the level of quality just isn’t there. Exceptions are far and few between.

Soviet Games is aiming to climb out of this rut in a big way. Founded by team members who worked on the popular Russian-made freeware VN Everlasting Summer, Soviet Games’ next project is Love, Money, Rock’n’Roll. And simply put, it is the most ambitious visual novel ever developed outside of Japan. They need our help to finish it, however, and they’re asking for $30,000 on Kickstarter, with a fresh demo to entice us with. I’ve been looking forward to this game for quite a while, so I decided to give the demo a spin. I came off surprised by both what it was, and what it wasn’t. It doesn’t buck every trend of western VNs, nor does it do anything remarkably innovative. What it does do, however, it does with far more polish and pizazz than any of its contemporaries. 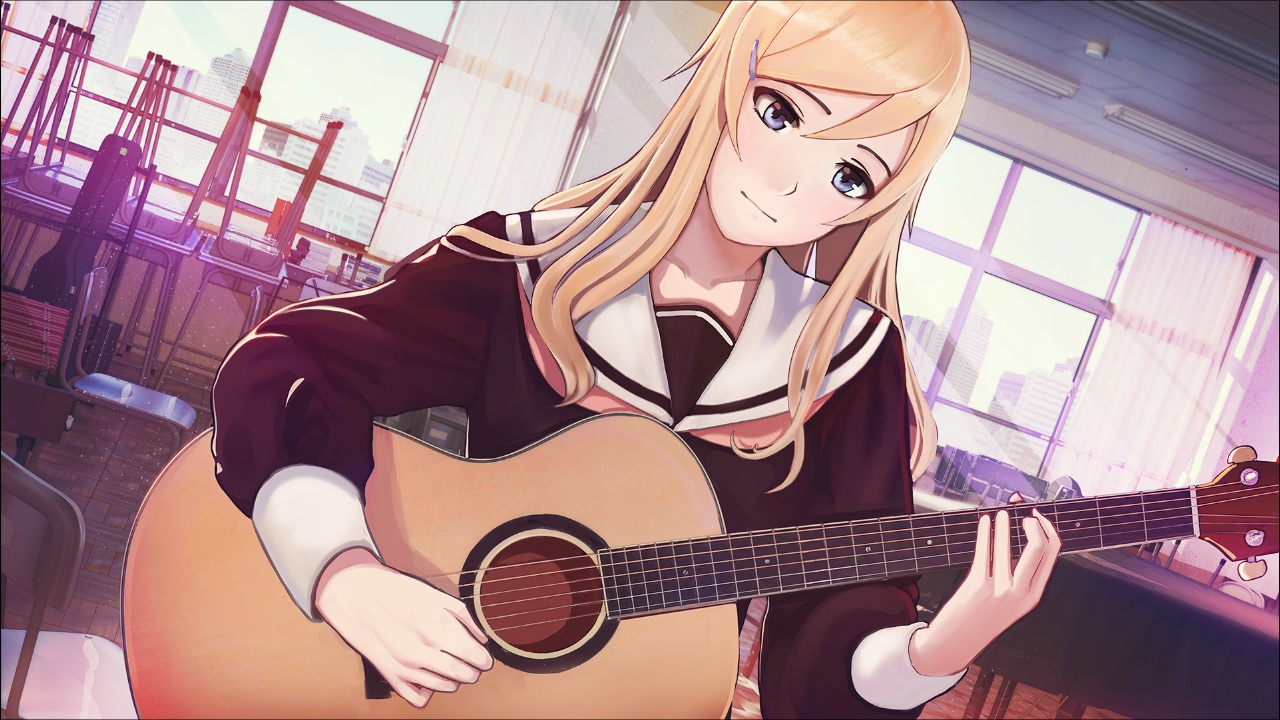 The art is gorgeous. The backgrounds and CGs are nothing short of beautiful. The detail present in the environments and especially the strong attention to lighting makes for some incredibly atmospheric scenes. I honestly don’t think I’ve ever seen better looking backgrounds from any other VN, western or Japanese. It’s not usually a part of the game readers think much about. The in most VNs they serve little more than to establish the setting, but the main focus is always on the characters. In LMR, every scene feels richly detailed, full of interesting things to observe thanks to the strong background art.

The character art is also very charming. In contrast to the backgrounds, they are lightly detailed and flatly shaded. At first I felt like the difference in art styles made the sprites and backgrounds clash with one another, with the characters feeling out of place. I quickly got used to it, however, and came to like the sprites as well. Their level of simplicity goes against the standard Japanese style of ostentatious character designs, but are very likeable nonetheless.

LMR is a ostensibly a game about music, and as you can expect much attention has been paid to its soundtrack. The demo alone contains 21 tracks, and they’re all pretty good. The game is set in the ’80s, and the soundtrack is a unique mixture of modern music infused with ’80s influences. I ended up liking most of the tracks, but sometimes they’re used in rather odd scenes. I expect that as more tracks are finished, they’ll be able to give some of those scenes more appropriate musical selections. The demo contained one studio-recorded lyrical track, and I expect the finished product to have more to fit the band-centered scenes in the story. 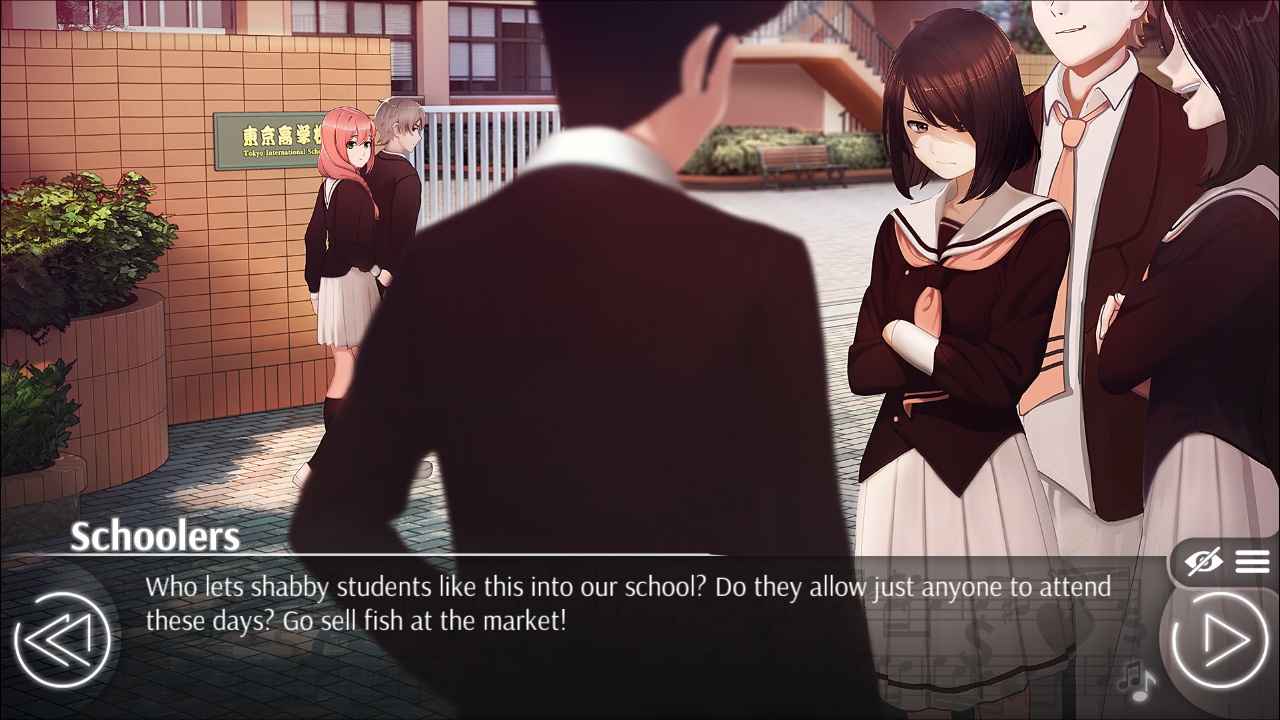 The story itself immediately starts in a somber way, with the protagonist waxing poetic on the ways in which his life has gone wrong, painting a bleak picture of the things to come. This brief prologue takes place several months after the start of the main story, and serves to set the tone for the rest of the demo. It turns out, it’s a lot less happy-go-lucky than I expected. The story is set in 1987 Japan and stars Nikolai, the son of two soviet engineers who fled the USSR  over ten years back. Both of them have passed away before the story’s start in circumstances that aren’t explained. Nikolai’s life starts taking a sideways turn when he gets involved in a petty fight outside the school gates, his ex-girlfriend suddenly returns to town and transfers back into his class, and then some figures from his parents’ past suddenly appear,possibly putting even his life into peril.

As I’ve implied, the game wastes absolutely no time getting into the thick of things. We’re barely given a moment to decompress after the rather confusing prologue before Nikolai’s life suddenly starts going downhill. The characters are all introduced in melodramatic fashion, and none of Nikolai’s interactions with any of them seem at all healthy. There are moments of levity intermixed with the melodrama, but the melodrama clearly wins out here. The pacing is honestly a little jarring. I understand and appreciate the tone of the VN is going for, but it’s hard to become invested in the deep interpersonal dramas being laid out before us when we know so little about these characters. I felt like I was on the outside looking in, observing a stranger’s struggles from a distance. That level of detachment makes it difficult to evoke an emotional response other than bemusement.

And then this takes me to the actual writing itself. There are somewhat frequent typos and grammatical errors, but I expect those to be ironed out prior to the full release. What I actually dislike is the style of melodramatic writing being employed here. Whenever things get dramatic, the narration has a tendency to go heavy on the metaphors. The problem is that it often fails to actually connect to the story’s events, and comes off as meaningless or pseudo-intellectual. 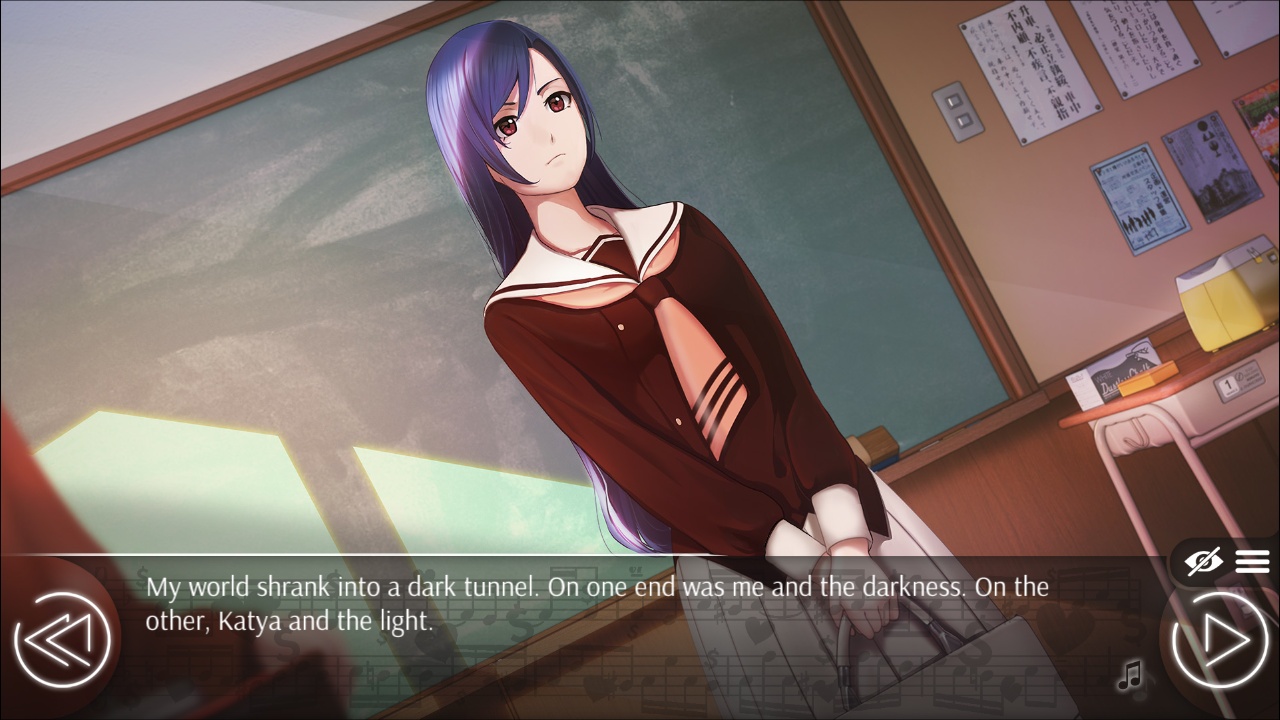 The demo’s prime example of this is when it compares the sudden reappearance of Nikolai’s ex-girlfriend to him travelling down the dark tunnel to the afterlife. It’s done in such a clumsy manner that I never figured out what exactly it was trying to say, and the game seemed to have immediately dropped and forgotten about it two lines later. It seemed as if the lines were solely used for dramatic effect instead of conveying any sort of meaning, but when using such methodology you risk your words coming off as empty, not deep. It also has the effect of making each scene seem much more dire than they actually are. Not every event needs to be the harbinger of the apocalypse.

The demo isn’t always like that, however, and I found a lot to like about the overall story and setting. When the demo was over, I actually wanted to keep playing. We only barely caught a glimpse of the musical side of things, how does that play into the overall story, I wonder? Who are the people apparently monitoring and threatening Nikolai? The demo was a scant 90 minutes and the kickstarter page promises dozens of hours. I want to see where it goes from here for sure. And if the issues I mentioned above are resolved, LMR has the potential to be something really special.

At first glance Love, Money, Rock’n’Roll appears to be just another copycat of Japanese VNs, and it definitely borrows heavily from the general JVN formula. It’s clear, however, that Soviet Games are putting their own spin on it. Its style of melodrama and what appears to be the gritty take on romantic relationships it will have is very different from your typical Japanese romance VN. And it will be able to take this unique spin and go toe-to-toe with bigger budget eroge in terms of production values. If this interests you at all, I strongly suggest you check out their Kickstarter and try out the demo.