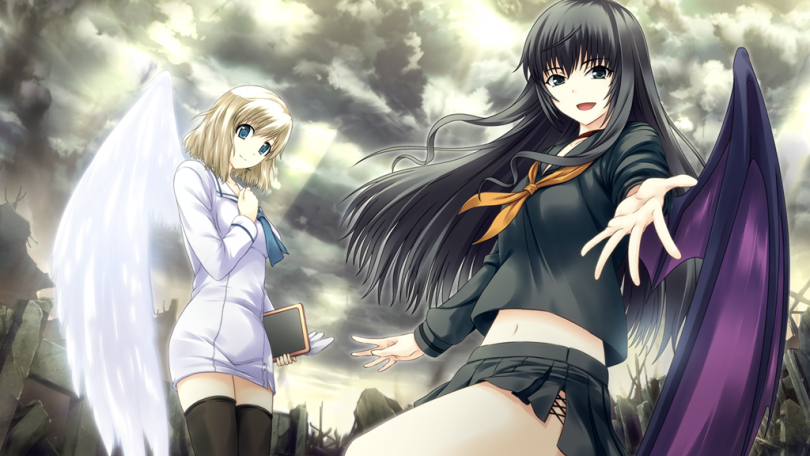 This week’s header image is from Tokyo Babel, whose demo was released just a few days ago! Pre-order available here.

Oh, hello there!  “I got called into the clinic, so I’ll plan on VNTS-ing when I get home tomorrow AM.” Nah Tay, don’t worry about it, I’ve got this. Let Tay’s story be a warning to you all, going to medical school will eat all of your free time. Never go to college, never be successful. It works wonders at giving you all the free time in the world! Who knows, maybe you’ll have enough time to learn Japanese and translate eroge for less than minimum wage. I’ve got the free time, but learning a language? Huh, sounds like a lot of work.

「Aight, so I edited this in an hour thirty after the thing posted. I can never keep track of exactly when things will go live when people use eagle-speak like “PDT” or whatever. Pathetic Date and Time? Pls, no. Anyway, visual novels, visual novels.

Front Wing says Corona Blossom will be an “in-house” translation and that it will be done by native English speakers. Color me skeptical.

It’s been ages since I saw something about the F/HA project. I believe the Vita release happened right around the actual translation patch release, but the Vita isn’t that easy to crack (where’s muh emulator for VLR, anyway?). That said, even if they actually manage to get the audio data, you’ll still need to find out where it fits in the game script. This probably means that either it’s possible to cleverly code up a way to transfer (most) lines based on comparison with the Vita version’s script, or you’ll have to painstakingly pick out each sound file and test it against lines from the game – a nightmarish task, and one that requires knowing Japanese!

While not reading too much into KARAKARA’s success, the campaign succeeding on Indiegogo is encouraging for those who want clearer lines on ero in their geemus. It’ll be a bit of a balancing act though, because IGG definitely isn’t as well known as KS. Sekai Project has enough momentum at this point to funnel people into their crowdfunders just by announcing their presence, but smaller publishers might find it quite a bit more difficult.

A long time ago I told Decay to get an actual source for OZMAFIA!! (gotta remember both exclamation points!!) taking notes from The Wizard of Oz. He never did find the info, and so I made him remove something to that effect. As it turns out he was correct. I have no regrets. With the Beastmaster and Prince Kickstarter failing (at a hefty $75k, despite how terribly it was handled), OZMAFIA!! looks to be the only otome VN of note on the horizon for official release. Aksys might pick something up as they have a history in the field, but otherwise I’m not sure what’s going to happen.

I just italicized all titles in that last paragraph so I could mock the double exclamation points. I think I’ve done that before, but I just can’t stop myself.

Zero Time Dilemma getting a Steam release might be a harbinger of a PC release of VLR, which would make me happy as I have no intention of ever getting a 3DS or Vita.

Root Double and Seinarukana seem to be the two big ones getting released soon. While I can’t say Seinarukana interests that much me as a gameplay VN, Root Double is something I had planned to read in Fapanese at some point in the future before the announcement. Given how rarely I read VNs at all these days, having it in English might be the only way I’ll actually get to it before the heat death of the universe.

This week we have some bad news, some interesting news, some odd news, and some good news! What a rollercoaster of emotions it has been. The bad news is that the Aokana project has been set back, all the way back. There’s a lot that can be said about expectations and disappointment. Nobody likes to be taken for a ride, which is perfectly understandable. I’m uncannily good at having little to no expectations for anything, ever, which may not exactly be a positive trait overall in life, but it allows me to take a detached look at matters such as these. There are those who get easily pulled in by hype or get emotionally invested in these projects, and they’ll feel the most hurt whenever a project that seems so close either gets the can or receives this treatment.

The one thing I’ll remind you of is that while it’s okay to be disappointed, you are still owed nothing. Entitlement is something that always bothers me when I see it. Of course, this feeling goes both ways, often fan translators get a sense of entitlement themselves. None of us are entitled to anything, and when you remember this fact, maybe you’ll be able to manage your expectations better in the future, and feel less burned the next time this happens. And it will happen again to another project, eventually.

In the interesting news category, Front Wing seems to be making a big commitment to the western market, announcing a new VN that will be releasing in English first. This is a little bit confusing, are they holding the Japanese release back just to play lip service to the west? Because the Japanese release should theoretically be finished a good time sooner, since it’s the lead version, being developed in Japan. Well, whatever. This follows in the heels of Key’s Harmonia announcement, which is also slated to release in English first. We don’t know much about Corona Blossom. Front Wing is assigning one of their less prestigious writers to the title, who has a whole lot of nukige and a few mediocre moege under his belt, and are also assigning their SD artist as the lead artist here. So don’t expect a high-budget banger made by FW’s A-team. Hopefully it will still be worth a read.

The odd news is about the cancellation of ChuSinGura’s kickstarter. The whole situation was just bizarre. The only VN Kickstarter to be canceled so quickly to my knowledge is Aroduc’s ill-advised unauthorized Romanesque campaign, not great company to keep. They asked for the moon and received a pittance in return. I hope they realize that they need to make major overhauls to their entire campaign strategy if they want to be successful, even with a reduced goal. Here’s my advice to Japan Content/b2g/Gloczus: Actually market the VN based on its merits, and not what you think the public wants. If you wanted to sell some mindless moege, then you should have actually licensed a mindless moege. ChuSinGura is not a mindless moege, moe is just another element of it like it is of almost every other VN ever. My second suggestion: Instead of getting some Japanese intern with a first-year-of-college level of English to write your campaign page, maybe get your native-level translator(s) to do it instead. I assume you have those, right? Because if you don’t, then suggestion number three is to hire competent translators. We’ll see how improved things are the second time around, but I’m not expecting a lot.

And the good news is that Ozmafia finally has a release date and a pre-order! Oh, well, I suppose an unfortunately large percentage of the users here don’t care, but I know there are quite a few of you who actually do, so this one’s for you. I’m pretty happy that there are major companies diversifying their portfolio, going after these other titles that are so often neglected. So far, it’s only MangaGamer. JAST has expressed interest in otome before, but Peter Payne blames the “voice actor yakuza” for charging exorbitant fees for the more famous VAs that come with non-h games. Somehow, MangaGamer is getting it done though. I hope there’s much more of this to come. SP and JAST need to start taking notes.

Anyways, that’s it for my nonsense! Hopefully less week there will be less bad shit going on to inspire my inner preacher. Sometimes it can’t be helped. See you all next week!

[Tay’s busy saving lives or learning how to save lives or whatever nonsense pathology students do. He’ll hopefully be back with us next week! – Decay]