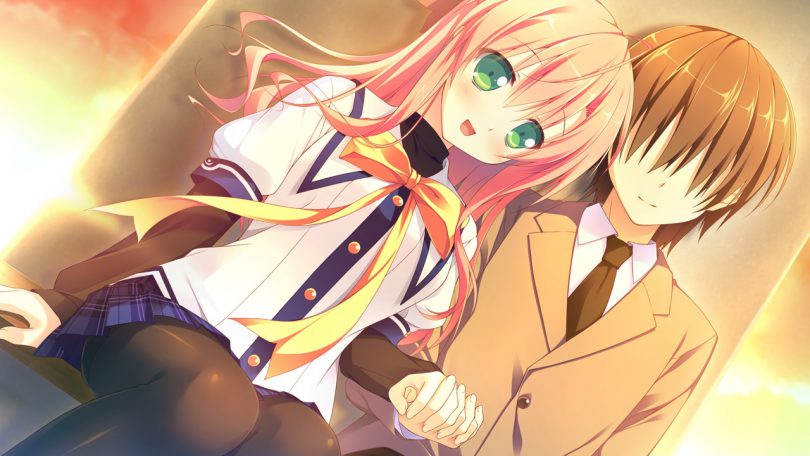 This week’s header image is from Clover Day’s, featuring Tsubame and our weird, eyeless freak of a protagonist. The translation for Tsubame’s route is finished, hurrah! I can’t do “fancy” headers like Tay does, so all you get from me is a CG picked largely at random, deal with it.

Are we alive? Is anyone there? Hello?? Whew, looks like we’re good to go! Things have been touch and go for a while here at Fuwanovel, and they kind of still are. But that’s not going to stop us from delivering your weekly VNTS! The Yoast SEO wordpress plugin is a demon that destroys databases, so that’s now gone. But it seems there’s a greater evil lurking in the darkness, one we’ve yet to pin down. We have Top Men on the job so worry not, justice shall prevail!

Things are weird in the VN scene lately. The effects Steam has had on the industry are showing in full force lately, in the most unusual of ways. Japan has taken notice and are almost literally tripping over themselves trying to find ways to exploit this opportunity. Sometimes, the methodology they’re employing is sensible and encouraging. Mangagamer’s latest translation rockstars Conjueror and Garerei were hired directly by an unnamed Japanese company to work on an unnamed VN that is purportedly highly rated and respected. They hired a competent team and are supposedly not even thinking about Kickstarter, imagine that!

But they’re an outlier. It seems that most Japanese companies can’t comprehend the rules that dictate the western market. This lack of understanding has been equal parts hilarious and cringe-worthy. Last year we saw several missteps, from FruitsJam’s bizarre (and denied) pitch for a free, all-ages Steam version of their masturbation-themed nukige Ona-Ken, to DebonosuWorks’ all-ages Steam release of Kagura Douchuuki, which seemed like a sex-heavy and gameplay-light H-RPG. Both of those endeavor’s were essentially failures. FruitsJam seemed to have already given up on the western market while DebonosuWorks is trying again, despite Kagura Douchuuki’s release selling only a few hundred copies.

The latest unintentional comedy routine comes to us via the ChuSingura Kickstarter, which launched just a few days ago. I haven’t seen a greater negative reaction to a “serious” Kickstarter in a very long time. The KS page I linked is the cleaned up version, it was even sloppier on its first day, during which it earned only $530 of its mighty $210,000 goal. Typos and grammatical errors littered the page, it demanded $100 shipping charges for any physical goods, and most hilariously, they copy and pasted the risks and rewards section from the Beastmaster and Prince Kickstarter, their previous campaign (it just failed today!). Ruining the chances for one VN wasn’t good enough, so they had to try again with CSG!

It’s hard to tell whether all of this is out of ignorance, malice, or incompetence. I think the answer is that it’s an unpalatable mixture of all three. The companies behind these projects don’t really seem to care about how it happens, just as long as they can somehow cash in on the Steam craze. But it also seems that they don’t quite know HOW to make it happen at all, nor have they exhibited the skills to necessary to execute on these plans. They’re frantically trying collect whatever morsels they can from this new and unexpected revenue stream, without trying to connect to their audience or consider long-term viability. These companies need to slow down, examine the market more thoroughly, and figure out what we truly want before over-committing. Anything less and they’re bound to be reduced to mere laughing stocks, except the joke’s really on us in the end.

And now for some bookkeeping, there were a couple suggested projects to add to the list made in last week’s comments, we’ll look into them next week. Campus Notes is a doujin release that seems to have come out of nowhere. We’ll also add ChuSinGura next week… maybe. To be honest, I sort of wanted to wait a minute and see how that developed first. But I already went ahead and mentioned it twice, so… Anyways, that’s it from us. Let’s hope that next week the fuwa servers will be stable again and we’ll be able to deliver the VNTS on time. Until then, have a good one!