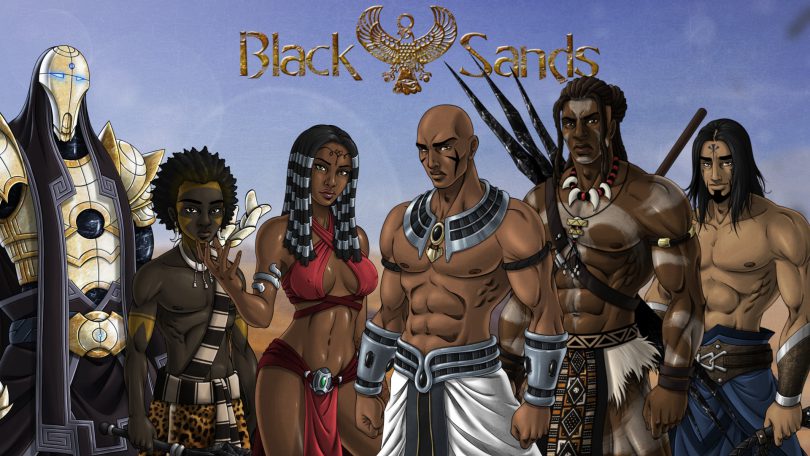 Black Sands: Legends of the Rift isn’t your standard western visual novel. Heavily influenced by African, Middle Eastern, and Indian mythologies, and with a comic book-influenced art style, it doesn’t draw from the standard set of influences your typical western visual novel does. When I played the recently released teaser demo, I saw a lot of potential. The art is of high quality, the sprites lightly animate, the music was good, and it even contained competent voice acting. To top it all, they’re promising a larger degree of player agency than is typically present in VNs. We talked with Black Sands Entertainment’s founder Manuel Godoy to discuss Black Sands, his inspirations, and how he aims to make his ambitious plans a reality.

Fuwanovel: Hello and thank you for talking with us. Why don’t you start by introducing Black Sands?

Manuel Godoy: Black Sands is a universe I created with the assumption that all mythologies around the time period 3500 BCE actually existed with the premise that they are all tied to the ancient alien theory. What this does is bind all the different pantheons into a singular law for the world, which makes things less “fantastical” and makes it seem more realistic. The story is about Demi-Gods and Ancient Gods battling to rule the world.

FN: Your site says that Black Sands will be feature gameplay elements as well, can you tell us about those?

MG: Yes, I’ll sum it up by using titles we all know. Black Sands: Legends of the Rift mixes a sudden stat check system like in Long Live the Queen, with an explorative map interface similar to Dragon Age: Inquisition’s “war room.” The player controls Rah and they must manage the relationships with the others, control his own sanity (because he has significant mental problems due to a flaw in his creation), and successfully deploy him people in the dangers of the Rift (the land in which this takes place). Missions unlock new content and there are many different types. Missions like Exploration, Investigation, Tracking, and Scouting can have very different ways to complete them and since everything in the game costs “time,” you must manage your team well or risk utter failure. FN: So this gameplay won’t be interactive but be based on map choices and stat checks?

MG: Yes, it’s more like dynamic storytelling, with timed decision making. If people do not use guides, they will feel like they are literally learning to be a leader as the game goes. In the game, we track “knowledge.” The more you learn about a certain enemy, the more “confidence” you will have if you must fight them. If you don’t research correctly, you might be forced into a situation where luck plays too big a factor, and you will potentially be faced with losing the campaign. There is also a romance element central to the story. Your character competes with his brother for the love of the female lead and unlike other romance games, you can very well lose the battle of hearts.

FN: With the comic book inspired art, the historical/mythological setting, and other differences like the competitive romance system, Black Sands seems to be doing things differently from what most OELVNs do. Do you worry about alienating VN fans?

MG: I am looking more to reaching out to VN fans that are also telltale fans, things tend to be faster pace. and the customer base I seek is a mixture of VN players who like RPGs and RPG players who like fantastic art. Chuuni fans will love it. [ed. note: Chuuni VNs are VNs like Fate/Stay Night]

FN: Are you happy with your demo’s reception?

MG: Definitely. Not one negative review. We did not focus on UI optimization or implementation, so that was the only criticism. Surprisingly, people liked the “directing” the most. I gave my team a lot of freedom when it came to making things right. I write the script, my writer then makes it pretty. My VO actors are allowed to change lines if the delivery is off, and my programmer optimizes or invents new things to make it smoother. FN: It certainly felt more “cinematic” than most VNs, is that something you intentionally went for?

MG: Yes. Technically, the original script was suppose to be a television series. I am extremely fond of historical fiction, so I emphasized epic monologues and one-liners. And I was lucky enough to land Mattashi, a freaking amazing composer. The music has been hitting everyone the right way.

FN: I thought the music was great, was it composed specifically for the game?

MG: Most of it, yes. Some were songs he made long ago that I thought would fit perfectly in our pantheon, but he has been working on an exclusive album for the game.

FN: Your setting is one very atypical of VNs and of games in general, with it being based on a blend of African, Middle Eastern, and Indian mythology. What inspired this?

MG: I am a fan of the speculative nature of the ancient alien theory. I also am a huge history buff. I wanted to put all these pantheons in the same story and explain how these cultures started believing in these myths in the first place. There is a heavy emphasis on learning the actual myths and locations behind the story. We have a feature called “The Book of Thoth” where anytime you meet a new character, location, structure, etc and it is based on any real world mythology, we give you the history behind it and why we decided to implement it the way we did. FN: Your plans are very ambitious. You plan on running a Kickstarter to realize them, but your first campaign failed to meet its goal last year. Why do you think this is, and what will make the second kickstarter more successful?

MG: I did not take the risks necessary to open the eyes of the player base I was trying to attract. I settled for budget art, which turned out disastrous. As a result, people never gave it a second glance and I failed to build momentum. I spent 5 months reinventing the game from the ground up and adding gameplay features. I also spent the last 3 months building a core fanbase outside of the VN world in the black community. (http://www.gofundme.com/blacksands)

I became successful at creating a fan base in the general black community in addition to the growing confidence in the OELVN community. Now I will be pushing to get interviews and reviews by the indie gaming media and and the black media to expand our influence. This game is not only a quality VN now, but also significant to the black community as a whole. If you look at the comments left by donors, you will see how they truly feel about the game. This is also why I am not settling with this teaser demo. We are creating a full featured demo with all the works that is 45 minutes long and walks through everything. Hesitant backers will feel security in what I say and what I will do with their money.

FN: When do you plan on launching the Kickstarter campaign?

FN: I’m looking forward to it, then. Do you have anything else you’d like to say to the Fuwanovel community?

MG: Only one thing. It’s time we as a community backed an OELVN that is truly a western unique experience. The common complaints of OELVNs are finally addressed and if we show our support in mass, we can usher in a new age for OELVNs where people take chances, and don’t stick to the beaten path.

FN: Thank you for your time.