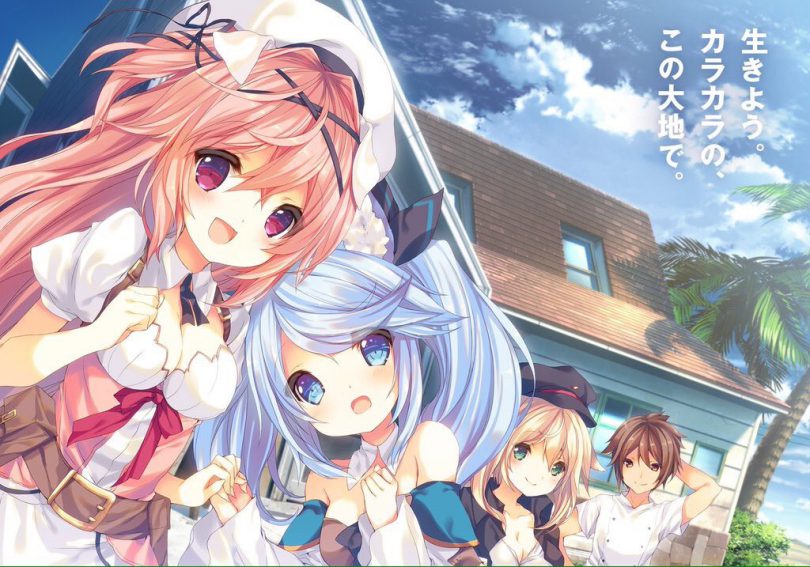 The announcements started early this year during Sekai Project’s panel at the Anime on Display convention in San Francisco, this weekend. To start things off, there’s Sakura Dungeon. This one isn’t really a VN but it was announced at the same time as the others, so what the hay, I’ll mention it. Sakura Dungeon will be a dungeon crawling RPG from Winged Cloud, the developers of the Sakura series. If you remember back to late last year, MangaGamer announced they had signed a partnership with Winged Cloud and will be publishing Sakura Dungeon. Looking back at MangaGamer’s announcement of the deal, it sounded like they would assist Winged Cloud in development. But now, suddenly SP is involved? It is now a mystery to me as to who’s publishing what.

Moving on, Sekai Project announced a whole new VN, KARAKARA. Containing a scenario written by Kio Nachi, the writer behind Grisaia’s beloved Yumiko route and Aokana’s main scenario, and an intensely cutesy art style from artist p19, this Japanese-developed VN is actually releasing in English first! KARAKARA at first seems like a mostly standard slice-of-life moe/romance title, but it’s set in a fictional America where humanity has entered into a state of decline and the Earth has grown arid barren. There will be both all-ages and 18+ versions available to English buyers June 27th, with a Japanese release happening in July. Comically enough, for as much as I’ve complained about EVN authors creating VNs set in Japan, seeing the opposite happen is oddly intriguing. Blatant hypocrisy on my part? Maybe.

Sekai Project has started a flexible funding IndieGoGo campaign for KARAKARA to help fund the development and localization, with the modest goal of $30,000. Many of you by now are familiar with Kickstarter, IndieGoGo is pretty much like that. It’s been around for as long as Kickstarter has, but generally doesn’t offer as much exposure. The reason SP is using it here? They specifically allow you to fund adult projects without dancing around the issue. An important thing to note is that SP is using Flexible Funding here, which means that they get every penny pledged, regardless of whether or not they reach the goal. The way you can see this is as an elaborate pre-order system, and indeed this aspect of IndieGoGo is built with this idea in mind. KARAKARA is being released in English no matter what. This campaign allows SP to sell the 18+ version outside of Denpasoft with more exposure, and to gauge exactly how many physical copies they’ll have to produce. In my opinion, it’s a much better way to go than how they handled Root Double.

And now, Hoshizora no Memoria. This visual novel needs no introduction to most of you. After the death of their mother, the protagonist and his sister return to their hometown after many years away, finds a mysterious girl who looks exactly as his childhood friend did all those years ago, and unravels the mysteries of his family’s past. This was previously unofficially fan translated by Staircase Subs almost three years ago. There is currently no confirmation as to whether or not SP will be using this translation, but the team leader Insemination says that he wasn’t contacted by SP, nor have they taken down their own patch release from their site. It seems likely that Sekai Project will be translating this from scratch. This may please some, as Staircase Subs’ translation was oft criticized. It will be releasing later this year.

One final tidbit: Wagamama High Spec‘s demo is releasing “soon.” I recall SP claiming that they want to release the translation at around the same time as the Japanese release, which is just a couple of months away. An english demo releasing soon may indicate that they aren’t too far off track. So what are you all looking forward to here?