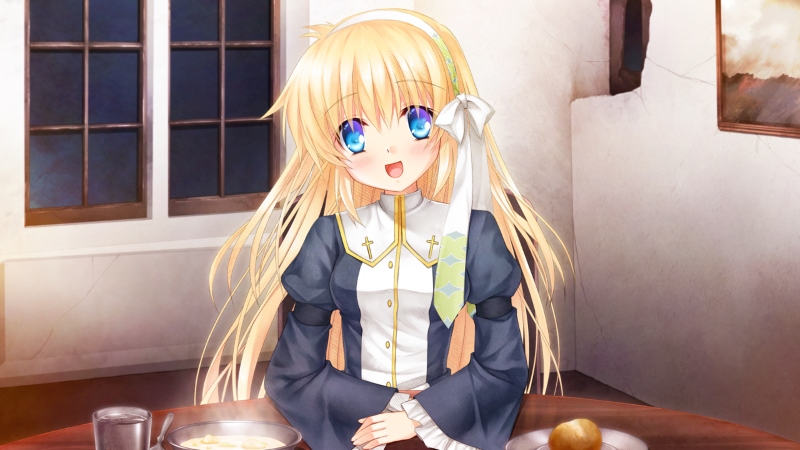 Today VisualArts Key, creators of famous visual novels such as Clannad and Little Busters, launched their Steam Greenlight campaign for the English version of their upcoming visual novel, Harmonia. Harmonia is a Kinetic Novel (zero-choice linear VN) in the same vein of Planetarian. The protagonist is a robotic boy who wakes up after a catastrophic war. Wandering around a desolate landscape in search of anyone, he eventually comes across and girl and with her, begins to learn what it’s like to feel emotion. Key appears to be expressing their dedication to the English market with this move by not only announcing a translation for a game before the Japanese version is out, but also promising to release it in the west first, sometime in 2015 (there’s not much time left in the year!). What this could mean for the future is anyone’s guess, but it appears that Key isn’t planning on abandoning the west any time soon. On a side note, Sekai Project, licensor and translator of the upcoming Clannad English release, isn’t involved with Harmonia’s release at all beyond some cross-promotion on Twitter. Whether this means Key intends to handle all upcoming translations by themselves from now on is unclear. Despite the bad history of translations managed by the original Japanese developers in the VN world, early impressions of the Harmonia screenshots aren’t bad.

Clannad’s release is nearing, and Key is publishing print ads in various otaku magazines promising a November release date, reaffirming the date given out at AX earlier this year. So get ready for what will hopefully be a proper translation of one of the biggest, most popular VNs of all time, coming next month.