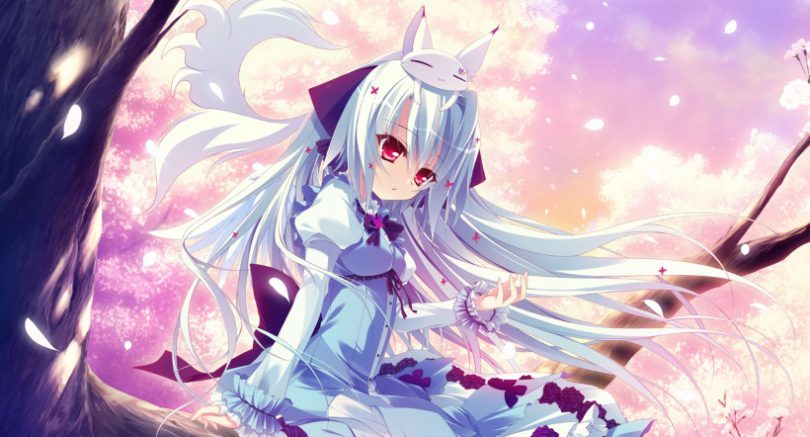 Joining the ranks of translation projects nearing completion, Koi ga Saku Koro Sakura Doki (aka SakuSaku) just reached 100% translation this Monday! SakuSaku is a cute and comedic character-focused VN praised for its high-quality art. The story follows Yuma, a serious but compassionate boy who has no interest in dating others. Unluckily(?) for him, this trademark compassion made him the most popular boy among girls in the school, to the point where they put a “love bounty” on his head! Things begin to change as a self-proclaimed “love fairy” who looks suspiciously like a shinigami shows up at his doorstep one day and begins freeloading off of his family. As you can imagine, comedic hijinks and romance ensues. Today, we’ll be bringing you an interview with the translator for this visual novel, Akerou.

To start things off, tell us a little about yourself and your background.

Well, to put it short, I’m a 23 year old German university student. My major is computer science and my minor neuroscience. It shouldn’t be very surprising to hear that visual novels are my big passion. Otherwise, I wouldn’t be here, right? Anyhow, I’ve been into visual novels since almost 8 years now, which is equally the time since when I’ve been learning Japanese. The interesting part about any language is, you can never learn enough, even if it’s your native one.

Why did you decide to start translating visual novels?

I guess I’m the type of person you’d usually refer to as emotionally cold. Consequently, there are very few things I truly enjoy, anime and visual novels being two of those. It’s a natural desire to get more involved with things you like and share them with others, all the more so if there’s only a handful of those. As such, I initially got involved with fan-subbing anime, but at some point, it started to feel redundant and pointless, mostly because CR had started to simulcast most anime with steadily increasing translation quality (some CR subs are still full of ridiculous translation mistakes though). Eventually, I decided to instead translate visual novels and set that decision into practice.

Why did you choose to translate Koi ga Saku Koro Sakura Doki specifically?

To be perfectly honest, there’s no deep reason. My plan was to polish up my English and get practical exercise in translation so that I can work on more complex titles, specifically IroSeka, without potentially impairing the reader’s experience. For that purpose, I decided to start out with a simple slice of life title and SakuSaku just happened to be an adequate work I had enjoyed in recent memory.

Technically Yuri, but I prefer the Tina route. Isn’t it downright criminal that there is no Aoi route?

Frankly, I personally didn’t mind it much since I’m not really into Onee-san characters, but one of my friends cried bitter tears (and probably still is). At one point he considered storming Palette’s office to demand justice. I think he was serious.

What was the biggest challenge you’ve faced while translating SakuSaku?

I’d say the constant fight against my weaker self. According to the statistics, I lose in 9 out of 10 cases, but for some reason, I managed to win more often than lose when it came to translation. Let’s just say the power of moe sided with me.

The dropout rate for fan translators is startlingly high, why do you think that is and what to do you do to stay motivated and productive?

I believe there are two major reasons for that. Firstly, most people engage in translating for the wrong reasons like seeking for acknowledgement, showing off or just trying to be a good Samaritan. The main reason should always be the personal enjoyment. Secondly, inadequate grasp of the extent of work. I actually made a similar experience when I started to sub anime. In your head, it sounds very easy. To cut right to the point, you mistake that language comprehension directly enables language production in a different language. Scientifically speaking, the reason why this is not the case is because comprehension ultimately takes place on a semantic level (subconscious) and language production requires a conscious grasp and analysis of involved semantics. In simple terms that means you have to consciously consider context, provided information, nuance, embedded emotions etc. to synthesize a target language output and this takes a lot more cognitive labor (and time) than you’d offhandedly imagine. So yeah, once people start to actually translate, they realize it’s moving along a hell lot slower than initially in their heads and eventually give up.

As for the second part of this question, judging from my experience, it’s important to decide on a fixed amount of lines you translate per day. Fulfilling that daily quota eventually becomes an intricate part of your daily live to the point you feel like something is ‘lacking’ or you even feel guilty whenever you don’t do it. As a positive side effect, you pretty much always stay productive because you never overwork yourself. Steadiness is gold. What advice would you give for anyone who is trying to break into the translation scene?

First of all, I can’t recommend it to anyone who isn’t willing or able to at least devote 2-3 hours per day for translating. Besides that, the best advice I can give is to just grab the visual novel you want to translate, and actually translate at least 5000-6000 lines before publicly announcing project xyz. You don’t even need a hacker for that. Use a text hooker to copy paste the first few thousand lines and have a go at it. That way, it should quickly become evident whether you enjoy it or not.

You’ve already selected your next project, Irotoridori no Sekai. Do you see yourself translating for a long time to come?

Well, if we add up all three IroSeka titles, we get to around 120.000 lines. That’s gonna take me some time for sure. Naturally, I can’t really say whether I’ll still have the drive to translate once that is accomplished, but currently, I have no intention to stop translating.

Any estimate on when we can expected the finished patch?

Anything I could say at this point would be mere speculation, so I won’t.

Thank you for your time. Any final thoughts?

Not sure whether it technically counts as ‘final thoughts’, but after re-reading a certain title the other day, there is a line replaying in my head non-stop. Anyone who can tell me whose quote this is will earn my eternal respect! ぴたっと、ピタゴラス。

We thank Akerou for taking the time to answer these questions. You can monitor his team’s progress in the Fuwanovel thread here or on their dedicated site here. Although it’s at 100% translation, there is still work to be done, as two routes need TLC and editing passes, and the whole product needs to be thoroughly tested. Akerou can’t tell us when it will be finished, but it won’t take too long! Be sure to give thanks for all the hard work put into this translation and to encourage the team as they put on these important final touches!