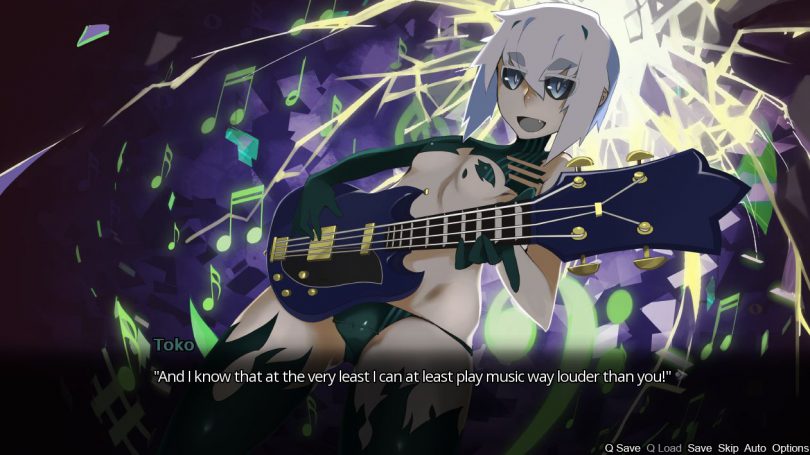 For me, music is an incredibly important part of a Visual Novel. The composers who can craft pieces that not only fit the mood, but invoke emotions far beyond what the story is trying to convey are the ones who are innovative, and, ultimately, memorable. I had the opportunity to speak with Ryuno, a freelance musician whose latest work in the Visual Novel scene involves a game we have covered previously – The Reject Demon: Toko. I’d like to thank him for taking the time to speak with me, and I hope you enjoy his insights into the music side of VNs!

Tell me about yourself!

I’m Ryuno, a video game music composer and writer from Brazil. I watched my first anime at age 6, and it just happened to be Akira. Once the shock from being 6 and watching Akira for the first time went away, all that was left was an interest in Japanese fiction and culture in the forms of anime, manga, tokusatsu, light novels and visual novels. I played several DOS dating simulators growing up, but I think the first actual VN to really have an impact on me was Narcissu, though Kanon and the first two routes of FSN are also heavy contenders.

The first VN I worked on was the demo for 12:12 -twelfth honor deed-, which is almost impossible to find on the internet nowadays. Recently, I wrote and composed for a short kinetic VN called “tuesday“, which is available for free, and I also write a light novel series called “The Longing of Shiina Ryo”.

How strong of a role is music to you when deciding whether or not you like a VN?

To me, at least, music/audio is what makes up for the lack of animation when it comes to immersion in a VN. It gives the mood to scenes and grabs people’s attention to what is, for all intents and purposes, a framed book with pictures that move every once in a while. It’s the icing on the cake, and while you’d still have an edible cake without it, you wouldn’t look at it the same and it won’t make you want to lick your fingers afterwards. However, unfitting music can really break a VN. This stems from the fact that not everyone writes music knowing that it needs to be a backgroup piece. Not to say things can’t be melody-based, but to me it works the same as “over-production” in a pop song: if you can tell something is there, you’re not watching the forest anymore, but the trees, and that’s not the purpose of BGM music (or production on a pop single). How were you originally contacted to work on projects by Lupiesoft?

I advertised my services on Lemmasoft and other development forums/communities. It’s a great way to connect with creators/team. In Lupiesoft’s case, it started with me being mesmerized by Taosym’s art and flat-out asking him if he didn’t want to do an art trade or something.

Let’s talk music creation. What sort of equipment do you use?

All in all, my setup is very minimal. My DAW of choice is FL Studio. For a long time, I only used it and nothing else. It required a lot of clicking, but the sample manipulation capabilities and fast workflow won me over on Version 10. I started buying synthesizers and controllers last year, and now I have a Roland SH-201, a Novation XioSynth 25, and a Korg Monotron alongside an Akai LPD8 controller for the pads. My guitar is an off-brand Les Paul imitation. Regarding software VSTIs, I’m very fond of Native Instruments’ Massive, the official Korg M1 emulation and Xfer Serum. I also recently picked up a Korg Poly-800.

So with all of those tools at your disposal, when you are creating music for a story (let’s say Toko), how much creative liberty do you get?

As a freelancer, too much creative freedom can be really, really bad. You have an unfinished product to make music for, so without guidelines you could end up going on a very different vibe from what the client is looking for. As such, I ask for references before starting work, be them music, videos and/or extensive writing descriptions of the moods I should aim for. It’s less having a blueprint and more having a game plan: things can change a little over the course of sending WIPs (Works in Progress) and receiving feedback, but good communication on both sides is necessary in order to get everyone what they want as fast as possible. Any surprises should be happy ones if you’re in the same “wavelength.” Were there a lot of WIPs?

For most of them, there were only one or two takes. I took a month off commissions to work on Toko, and that made it easier to get the tracks where they needed to be. The one that gave me the most trouble and had several WIPs was “Swallow You Whole,” because Alto Saxes are absolute hell to program if you’re doing anything but smooth jazz – because that’s what the virtual instruments were made for. I’d like to see libraries as intricate as the modern guitar ones for brass instruments in the near future, because I don’t know any Alto Sax players that can just record a line properly at a day’s notice.

Favorite song on the Toko Soundtrack? Talk about some of the aspects of “getting hired” to “final product.”

From the moment I accept a gig, I expect an upfront payment of 50%, and I would suggest any and everybody doing commissions for a living to do the same, always. It’s a hard thing to do, especially when you’re working with people you know, but there’s a lot less stress involved when people pay you upfront. When money exchanges hands, it becomes “real” for both you and the client.

I usually ask for 1-3 days before I send the first WIP. That almost never happens, because I’m a workaholic and will have something presentable in a few hours. 1-3 days is good because even in a worst-case scenario (computer dies on me, something happens in my household, internet issues, etc), I can still find a solution and not let my issues interfere with my clients’ schedule. Because I like working fast and constantly, I tend to meet my goals before the deadline.

I have a personal rule of allowing up to three major changes before I consider refunding the client and just walking from the gig. I learned life is too short to let a bad gig ruin your day and make you want to quit doing something. Sometimes you get a bad match, and it’s the same with relationships. It doesn’t have to be anyone’s fault, and you don’t have to stay in for the sake of just completing it, you know? If it’s not working out and you’re using more time and effort than you should have, maybe you should use your time elsewhere. A job is a job and some stress is to be expected, but even a workaholic like me can’t make it too far without realizing how sometimes you got to put your own well-being first, even if that means letting go and using time for other gigs.

So if someone wanted to get involved in the music writing side of VNs, what tips would you have for them?

I’ll tell you the five tips I wish somebody would have told me when I started.

Read the manuals. Your DAW’s, your Synths, music theory. Anyone who tells you that’s going to hinder your creativity is not a friend, because you’re going to do things you could achieve with theory but just not understand what you’re doing.

Don’t take more projects than you can handle at your worst. When you’re working with a team, people are counting on you.

Don’t be scared of the competition. If you’re unsure about your quality compared to others, just get getter. No half-measure, keep on learning.

Your portfolio is everything. Make a SoundCloud account and make tracks in several styles. If you don’t know that many genres, learn them, or you won’t be seen as competent enough. There’s a time for flashy instrumentation and a time for background music. Right now, my favorite genre is Future Bass, and I think it shows. I’ve been doing a lot of it lately.

Thanks for stopping by!

Thanks for having me! My free EP just came out on Attack the Music, and the Anime OST for “SEX and VIOLENCE with MACHSPEED” should be out soon. Please check them out!