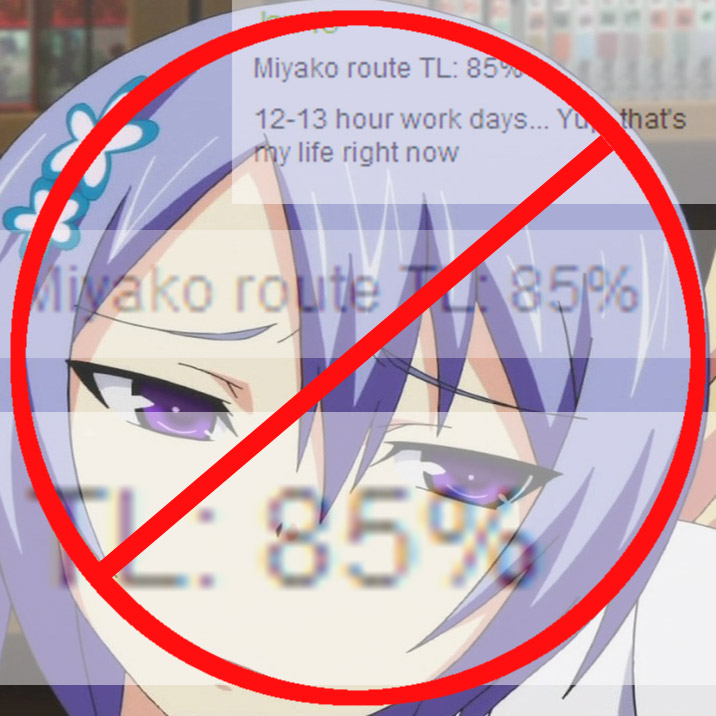 I blame being on time this week on having to write two posts today. Wait, that doesn’t even make sense…

This is more or less a copy of a post the user VNTS does on 4chan’s /jp/ board weekly, with some edits, potential additional entries and such. Entries in green have progressed since last week; this week, we saw progress on 8 projects and the release of Hanachirasu and a full patch for Majikoi. Oh, and Bunny Black popped up on the list; it’s yet another translation by Aroduc.

I actually added quite a few things VNTS didn’t pick up on this time, enjoy.

You might want to consult the post I did earlier today for more info on all those releases. Hmm, maybe we should add the Lucy tl once they actually report something. If they do.

I almost tweeted about the WEE progress with a slash between the two relevant numbers, for a given level of almost.

Koirizo’s reporting editing progress now. Interesting to see a multi-pass approach, which I’m not sure is that common (though TLC tends to be like that at times, as far as I know).

…I’ll have you know I spent valuable time wrestling with the GIMP to produce that image. Hopefully I won’t be upsetting the guy who made the original too much.