Home » Blog – All Latest Posts » Lupiesoft’s “The Reject Demon: Toko” is on Greenlight 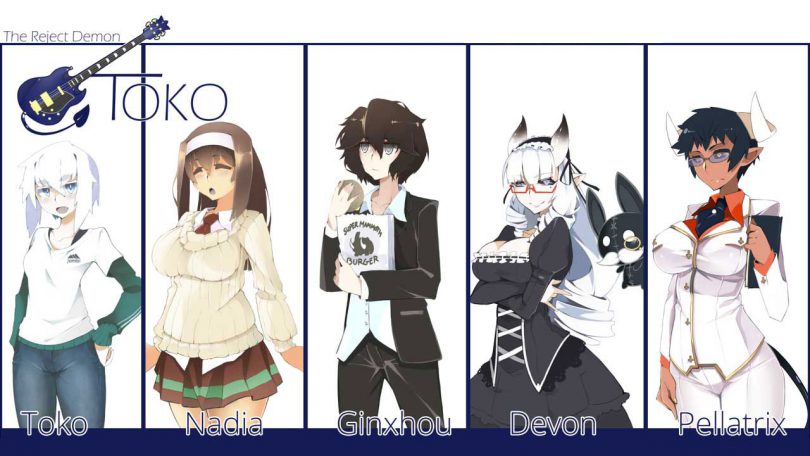 Set in a world where demons ferry the souls of humans destined to die to the afterlife, “The Reject Demon: Toko” is about the demon Toko who’s been kicked out of Hell.

Lupiesoft’s episodic kinetic novel project, “The Reject Demon: Toko” (known hereafter as “Toko”) has launched on Steam Greenlight and is ready for your support! The “episodic” adjective over there was what originally caught my eye: the game will span four chapters (starting with Chapter 0) (because starting with Chapter 1 is for chumps) which will be released one-at-a-time.

The premise of the game is that Toko, a demon who is failing to live up to her job, is kicked out of hell and finds herself living on Earth. The worst part? The longer Toko lives here, and the longer she spends around Nadia (the girl who took her in), the more human she becomes! To quote the game’s site: “Toko is about comedy, romance and a [sic] Hell’s sacred art of Rock n’ Roll!”

If you tried Toko last year (after the game jam which sparked the concept), there are a lot of features which will justify checking out the new release: “much improved art, a much bigger cast, new scenes as well as a new ending [which] doubles the length of the original story!”

My take: Toko’s core concept is pretty cool and I like the release plans for the game (specifically: I like episodic releases in general, and I think it’s cool that the folks over at Lupie chose to run with and expand a concept which snagged their imaginations). It’ll be fun to see how rock and roll — a “sacred art” in hell (< something anybody who listens to 80s rock already knows) — is integrated into the game. Admittedly, I’m not at all a fan of the anatomical design of the female characters, but the styling and the other art assets on the game page (like a background of hell) look great. I’m definitely looking forward to more updates about Toko in the coming weeks.