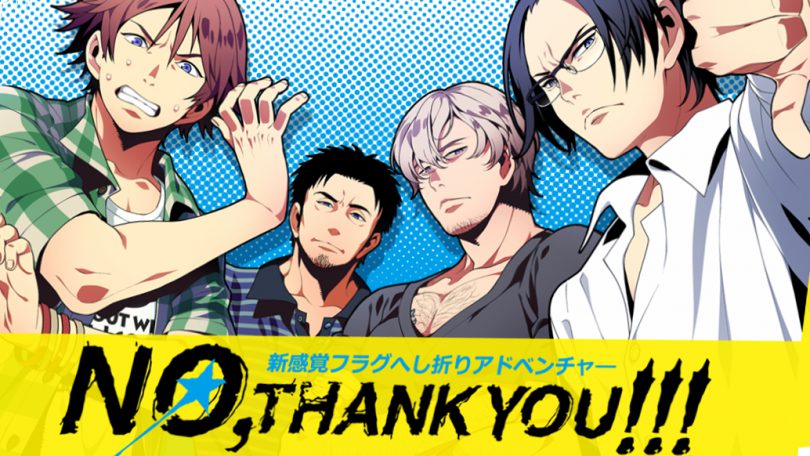 MangaGamer has released No, Thank You!!!, an adult BL (Boy’s Love) VN. A 2013 title, NTY was created by Clockup employees under the label Parade, and has been Parade’s only title so far. The story is reportedly pretty dark, but saying why is apparently spoiler territory… sounds a bit like like Euphoria in that aspect. The translator’s been hyping it as fairly unique for the BL genre.

MG blurb on the setting:

This summer vacation begins with a car accident…

Our protagonist protects a man from an out of control car, but gets hit and loses his memory in the process. The man he saved happens to be the owner of a jazz bar, sótano. Out of sympathy for his hapless savior, the man decides to set him up with a job and a place to live.

From the outside, sótano looks like a cozy little jazz bar, but behind the scenes they solve problems that the police and legitimate detective agencies won’t touch.

The staff there give our protagonist the name “Haru”. He gradually makes his way deeper into the organization, and the hearts and lives of the staff, while working as an apprentice bartender. But just who is Haru really…?

MangaGamer has a promotional site for the VN, and there’s also an archived stream of the first chapter on Twitch. You can buy No, Thank You!!! at MangaGamer’s site[NSFW] for $39.95. It’s a long VN, so you should hopefully be getting your money’s worth out of it. Protagonist Haru has an interesting personality