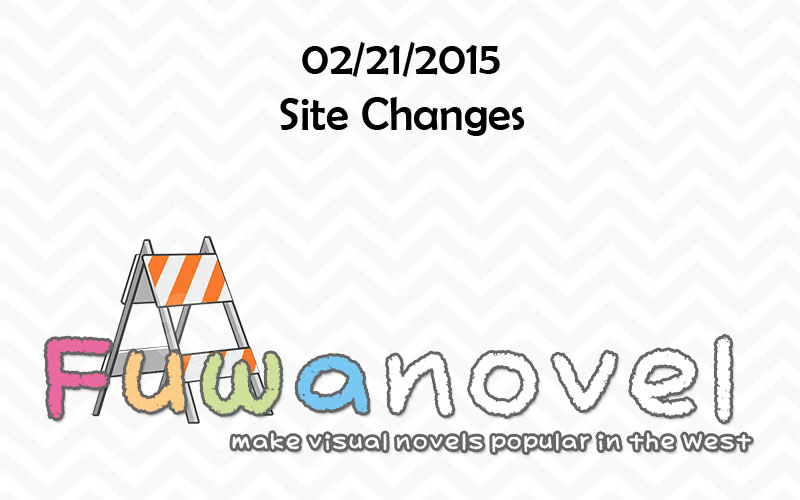 Today’s post is meant to explain and summarize the many changes — large and small — coming to Fuwanovel (in case you haven’t yet heard). I announced these several days ago on the forums, and early yesterday morning I posted an open-letter on Reddit confirming these changes and offering some additional context. You’re welcome to read both of those sources for more information, but I’ll put the key info here in this post. If you’re short on time, skip to the bottom of the post where I’ve attached a cheat sheet of the site changes.

We’ve switched domains and moved to a new server

We’re almost done moving from Fuwanovel.org to Fuwanovel.net.  All that’s left is the front site, which is being migrated and will be done sometime between now and March 1st. All of this is thanks to Nayleen, our webmaster who has done an amazing job and made the move look easy. We’re very fortunate to have him helping us out, and everybody should send him a “thank you”.

There were a lot of reasons for this move, but the catalyst for doing it now was protecting those who work on the staff or community projects from personal risk and providing stability. We’ve got a lot of projects rolling out this weekend and over the next few weeks/months, and we needed to have long-term stability ensured to justify the financial and temporal (time) investments required.

Short version: We’ve launched a new website: FuwaReviews (reviews.fuwanovel.net) to be a hub of VN reviews from bloggers across the interwebs — all in one convenient location.

Slightly longer version: We’re building a VN Reviews hub which hosts both official FuwaReviews team reviews as well as community submissions,  but which also contains truncated rss feeds of as many VN reviewers as will sign up. It’s still a work in progress, but the entire goal of the site will be to drive traffic to the blog authors. We won’t use or claim any of their content, and we do have additional features planned to highlight some of the very talented reviewers out there. Here: take a look: ^ That’s only a portion of the hub and doesn’t show the awesome off-site blogs feeds, so be sure to head over there and take a look: reviews.fuwanovel.net .

The forums have been updated with blogging software. It’s got a lot of cool features:

The biggest change for some of our users is that we will not be providing torrents on the new site. We’re going to have a lot of resources to help you find games (including a mobile VN database for both iOS and android) as well as patching guides to help you patch a game you obtained elsewhere. This will let us expand our database a lot, and on the PC front the initial goal is to get >250 of the most popular VNs into the database within 6 months.

Besides the new mobile games database, the other big new feature is “Fuwanovel Academy” – the evolution of the “ultimate VN starter kit” idea – will be a section on the front site which will explain the genre, help players get started with a visual novel ASAP, and provide a lot of advanced information about the VN landscape, “movers and shakers” in the western VN world, and (hopefully!) some exclusive (read: slightly longer than normal) demos from our dev allies.

The front site is being completely redesigned and trust me — it looks incredible. Emi and Beato are both very talented and smart, and everyone on the Redesign Team is floored by the mock-ups.