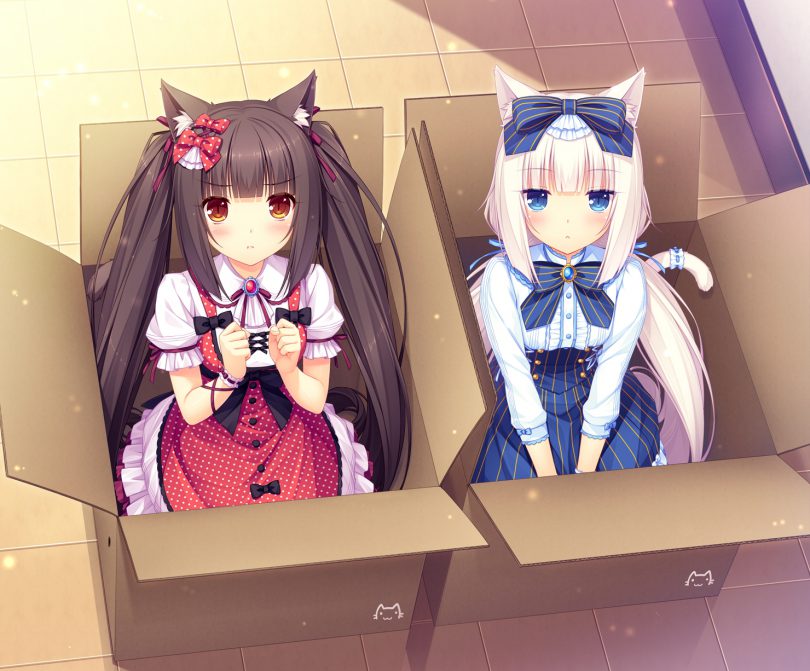 Alright, so I’m a bit late on this, but anyway: the hotly anticipated catgirl moege NEKOPARA Vol. 1 has been released in two incarnations: an adult version on various sites; and an all-ages version on Steam. The Steam version will be a dollar off until 5 January; the current cost is either 8,99 dollars or euros depending on if you live in Steam’s scam zone. Hard copies are currently available for pre-order from Denpa Soft; those will ship in February.

In NEKOPARA Vol. 1, protagonist Minazuki Kashou surreptitiously moves out of his family home to start the patisserie La Soleil (erroneous French intended.) Upon arrival, he finds two strange cardboard boxes he doesn’t remember telling the moving company to bring… turns out they contain Chocola and Vanilla, two of the catgirls who lived with his family. Said catgirls are genetically modified housecats, and while they have gained some human traits including the ability to speak and read, their catlike nature make them more highly intelligent pet than responsible individual.

Based on (and greatly expanded from) two H-doujins featuring Chocola and Vanilla, one of the main draws of the title is its art, drawn by Sayori. NEKOPARA utilizes highly animated sprites using the E-mote system in most of its scenes, including H-scenes. Presumably intended to be the first in an episodic series (hence Vol. 1), it is a kinetic novel and thus has no choices.

NEKOPARA‘s translation has faced some criticism. Although there has been some improvement after the release of the trial version (which had a part that didn’t really make sense at all, apart from general awkward phrasings), it’s still not the best read. That said, it’s not terrible, gets better after a while, and certainly lets you enjoy the main point of the game: them moe humanoid cats.