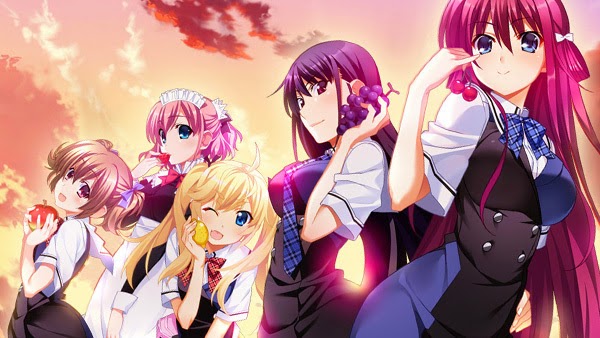 Sekai Project has launched a Kickstarter for an official localization of the Grisaia series of VNs.  They are looking to raise $160,000, with stretch goals at $200,000 (a translation of the humorous spinoff Idol Mahou Shoujo Chiruchiru ☆ Michiru) and $240,000 (console ports; which consoles they will be for still unknown).

While the Kickstarter aims to fund all three parts of the Grisaia series, the English community is most familiar with its first installment, Grisaia no Kajitsu. Kajitsu received a fan translation patch, acclaimed for its translation quality, on 26 July, 2013. This patch was subsequently pulled from distribution on 3 July 2014 as Sekai Project announced they has licensed the VN. The team who worked on Kajitsu‘s fan translation will be working on the sequels as well, so the translation quality we saw in Kajitsu’s patch is likely to be maintained.

Kajitsu follows Kazami Yuuji, who enrolls in the rather atypical Mihama Academy at the start of the novel. Despite its expansive facilities, it is host to just five students, all female. As the story progresses, the taciturn Yuuji gets involved with the girl of your choice, who will inevitably turn out to have a dark and troubled past. That said, perhaps Yuuji himself is the most troubled of all – though kept somewhat subtle, it is clear that he too belongs in the gilded cage of Mihama Academy. The sequels Grisaia no Meikyuu and Grisaia no Rakuen contain side stories for the heroines, as well as a look into Yuuji’s past. Meikyuu reportedly ends on a cliffhanger, which Rakuen‘s grand route continues from.

One of the main concerns surrounding the Kickstarter is that only the all-ages (but still M-rated) version of Grisaia will be covered. The all-ages version, originally a PS Vita port, has additional CGs and is reportedly done well for the most part. However, it has problematic levels of textual censorship in the Angelic Howl section of Amane’s route, which is generally considered the best part of the route. While some of these changes may be reverted back in the localization, scenes that have been cut entirely are unlikely to be re-added.

Emphatic promises have been made by series translator koestl an 18+ version will be released some time after the all-ages version; ballpark figures of 1 month have been mentioned, but there is currently no official statement on the matter. The latest news is that more information “will be made available near the end of the campaign”. Denpasoft, considered an offshoot of Sekai Project intended to publish their 18+ offerings under a paper-thin disguise, has teased a release of the title on Twitter.

All-ages or no, any concerns of the Kickstarter not bearing fruit have been more or less wiped out at this point, as the Kickstarter has already raised $128,567 out of its $160,000 goal at the time of writing.