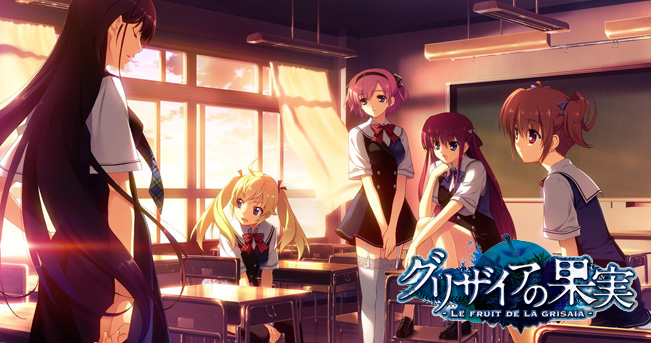 Sekai Project has launched a Prefundia page for an official localization of Grisaia no Kajitsu, with translations of prequel and fandisc Grisaia no Meikyuu and sequel Grisaia no Rakuen listed as stretch goals. The proposed goals are set quite high, which according to SP is because of the high cost of licensing character voices. Aah, voices, the bane of localization… some other examples of this would be MangaGamer’s Koihime Musou and Kara no Shoujo, which were originally released without voices and later received voice patches after a certain amount of copies had been sold.

The Kickstarter’s goals are currently stated to be:

As it turns out, Sekai Project now states that they might not distribute the VN on Steam at all in case Valve decides to not publish the title’s all-ages version. In that case, both the all-ages and 18+ versions will be available through Sekai Project; otherwise, only the 18+ version will.

The “all-ages” version is still rated 17+ and has naked scenes, leaving only h-scenes and a few other borderline scenes out (Sachi and Michiru… playing on the beach comes to mind.) The removal of h-scenes is reportedly done well, with fades to black occurring only just before actual pornographic content. Some scenes added to the all-ages version of the VN may be left out the 18+ one, as they cannot be smoothly inserted into the story of the original.

The Prefundia page mentions the possibility for a translation of part 1 of Idol Mahou Shoujo Chiru Chiru☆Michiru (the second part is slated for a December release in Japan; sources claim it will be on the 26th, but this information cannot be found on the creator’s own site.) Idol Mahou Shoujo Chiru Chiru☆Michiru is a spinoff starring Michiru, who is an unpopular idol striving to become as famous as the admired Kazuki. Among other things, she becomes a magical girl… I’ve heard it’s pretty good.

Interestingly, a translator working on that same VN recently revealed his work on the Fuwanovel forums, and has now contacted Sekai Project regarding a potential collaboration. The translator is adamant that he will finish translation of the VN no matter what “even it’s illegal for anyone but myself to read it in the end.”

Update: Having gotten in touch with Sekai Project, the Chiru Chiru☆Michiru translator says this:

I’m in contact with Sekai Project, and have signed an NDA with them. That does not mean I’ve necessarily joined the project, but it does mean I probably will not be allowed to provide much more information about this situation from here on out.