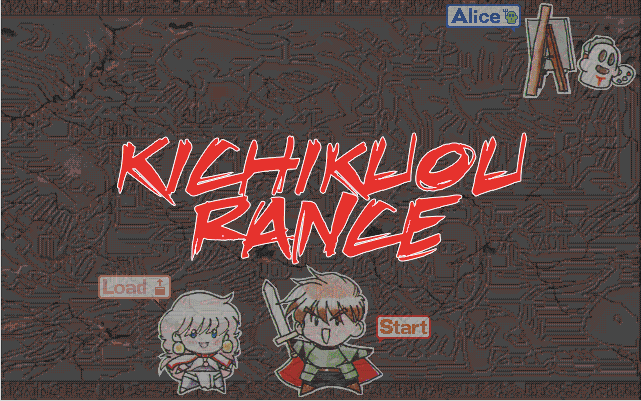 So yeah, this is actually news from 13 September. Still, backlogs are backlogs, and it’s not quite old enough to give up on just yet. Arunaru of Arunaru’s Translations has released an English-translated copy of Kichikuou Rance. The Japanese version (1996) was eventually re-released as freeware in 2008; the English version is a self-contained package, not a patch.

Kichikuou Rance is the seventh game in Alicesoft’s Rance series. Apart from turn-based strategy gameplay, it’s got the trademark Rance high amounts of rape and lots of heroines (come to think of it, this tends to be a thing in most SRPG VNs.) While rape scenes with the protagonist, Rance, have some comedy potential (because Rance has a rather unique personality), there are also quite a lot of depressing and brutal ones (anything not starring Rance) so beware.

Description from the Alicesoft wiki:

This game is not part of the official Rance universe timeline, forking off after the events of Rance 4.2, as a “What if” episode.

The prelude starts with Rance leading a band of bandits in rural Helman Empire. The Imperial Patrol crushed his band with overwhelming force, and captured his slave, Sill. Rance fled to the borders of Leazas where he was rescued by Kanami, personal ninja of Lia, queen of Leazas.

Eager to take revenge upon Helman and rescue his slave Sill, Rance agreed to marry Lia. As the new king of Leazas, Rance set his first step on a path that eventually leads to world domination, or death.

Since the game is a “What if” episode, it won’t necessarily provide you with that good of an introduction to the characters in the series; where to get into Rance is a contested question as the earlier games are pretty bad by modern standards. In general the older stuff is (I hear?) eclipsed by Sengoku Rance, so you’re probably building up to making that even more enjoyable. This reddit post might shed some light on the whole thing; apparently Kichikuou isn’t all that bad to start with, though you can just skip to Sengoku if you feel like it.