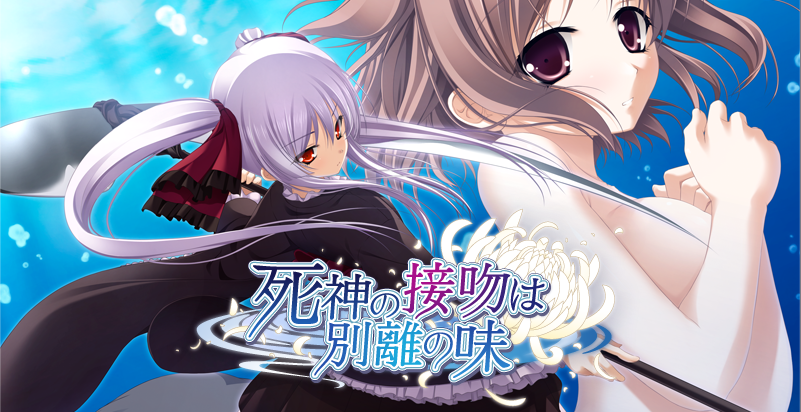 A project that was started in the very beginning of 2012 has now reached it’s hour of arrival. Fuwanovel is proud to announce the completion of the translation for ALcot’s: Shinigami no Kiss wa Wakare no Aji! The translation team known as Kohaku Translations is responsible for this amazing contribution to the visual novel world.

The story takes place in the small, Japanese town of Nissei. This peaceful seaside community’s supposedly unscathed history is interrupted when tragedy struck a duo of young children, whose childish antics are overcome by a particular romantic fancy for each other. When the story’s protagonist–the male of the duo–, Amamiya Makoto, finds himself knocking at death’s door, his friend gives her life to save his. The trauma Makoto was forced to face was enough to drive the common man to suicidal depression, yet somehow, he managed to cope with his grief, and lived on in the very same town where his greatest struggle still lingered in the shadows of his heart.

The inexorable hold of time speeds days, weeks, months, then years past Makoto’s hazy eyes. As life moves its course, Makoto slowly, but rather painstakingly, begins to force himself to forget, and attempts a peaceful life with his younger sister, Amamiya Shizuku.

But one can never truly forget.

Makoto’s supposedly “peaceful” life is shattered when he meets Kohaku: a loli shinigami who’s self-professed purpose for being in his presence is the overseeing of his death. “Is there something you want to leave behind for your loved one?”

(Author’s note: I’m quoting directly from VNDB for these character profiles.  Thank you VNDB’s contributors ,who translated and wrote these respective character descriptions.) 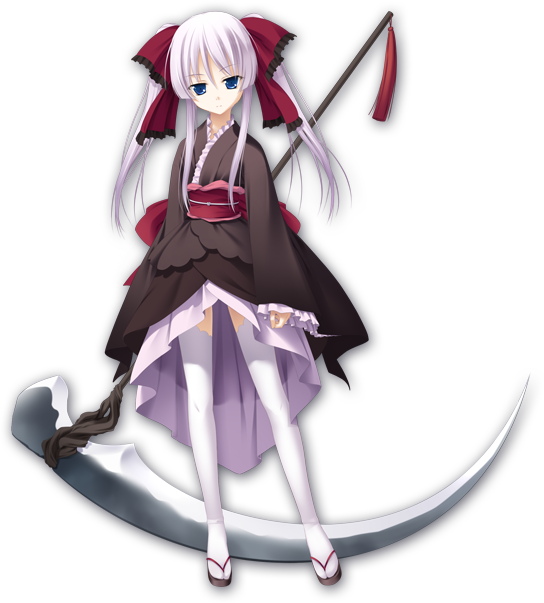 A girl that calls herself a shinigami. No one can see her except Makoto. Ever since he saw her at a murder scene carrying a large scythe, she’s been appearing more frequently. She rarely shows any emotion, so you can’t tell what she’s thinking.

Finding Makoto’s room comfortable, she settles in before he realizes it, and enjoys watching him in the bath.

The protagonist’s younger stepsister. When she was little, her father remarried and she had a hard time accepting Makoto as her older brother. She still doesn’t talk to him much, but when she has spare time she’ll go to his room and read magazines on his bed. She sleeps a lot, and always has to be woken up in the morning by her brother. She even says herself that she can’t do anything without him.

She rents a lot of horror movies from the store that Makoto works at, but since she’s a scaredy-cat, she can’t watch them unless he’s with her.

The daughter of the owner of the video rental store “Kokonoka” that Makoto works part-time at. She’s a reliable person that’s kind to everyone, and is the class president. Her father is always nagging her to get married, and he recognizes her and Makoto as a couple even though they aren’t in a relationship. She helps out a lot in the store, but doesn’t go near the adult corner.

One of what I consider to be the dark horses in the April release batch, I nabbed this one with no expectations and instead the story nabbed me. I was hooked, line, and sinker.

What I found intriguing is the main protagonist, Makoto, which is rare for me. He used to have an osananajimi but because of a tragic accident, she sacrificed her life to save his. Makoto continues to live on, but his heart sits at death’s doorstep. I can’t really put a handle on him. He’s kind to others but disinterested in pursuing romantic relationships. He’s not emo or suicidal, but he is also not afraid to die. Makoto is calm, perhaps too calm. If he ever has the ambition, he’ll be an incredible poker player. The one thing that I can say for certain is the girl he loves, only lives in his past.

The game have tragic elements and it doesn’t hold back the punches. A minor character named Satonaka Rin confesses to Makoto and while thankful for her feelings, he turns her down. Her brother heard about this later and asks him to try to reconsider but Makoto is resolute in his decision. When I first saw this I thought, “Hey, a male subcharacter without his own paper doll have a voice? That’s pretty neat.” Even though I could not see his face, I sympathized with his want for his sister’s happiness.

What I didn’t realize was that soon after, a stalker stabs him and dies from protecting Rin. Nicely played Citrus. You are able to have me connect with a faceless, minor character and pity Rin’s tragedy, and it is only the beginning of the game. Not only that, but a strange girl says Makoto will die too. That’s a nice way to lighten up the mood. Produced by Alcot Citrus in 2009, Shinigami no Kiss wa Wakare no Aji was the only game released before the child company of Alcot closed down. In a nutshell, it’s a story about a guy, the people he love, and a shinigami. Characters: The guy, the protagonist, the main character, is one named Makoto. His osananajimi died when they were young to save him, and now he has pretty much no will to live. He can be pretty funny at times though. The non-blood-related sister is Shizuku. She’s a bit of a tsundere, and is great at insulting her brother. That, and throwing out sexual innuendos like no tomorrow. The classmate/workmate is Honoka. Yes, she is every bit as sweet and reliable as her sterotype suggests. Her dad runs a video store, and is pretty funny. The problem is, she has a friend named Rin, who confesses to Makoto first. The loli shinigami is Kohaku. She’s pretty much emotionless, until character development kicks in. She doesn’t know much about the world either, which can be pretty funny. Her route is only unlocked afte rthe two other routes are cleared.

I thought that it was ok. Maybe it’s because I’ve been spoiled by Merry, or maybe because I went through the story pretty quickly at 1 in the morning, but I felt pretty much no emotional attachment to the character. At times, such as when Kohaku moved in, the story kind of felt nonsensical. The drama was ok sometimes, and the slice of life was entertaining enough. I think that a good point about the story is the fact that it is short. The story was more tight-knit and easier to go through.

The endings aren’t perfect, but they’re the subtle kind that gets better when you remember and think about them more. It might just be me rushing again, but I actually had to go and read a few analysis pieces before I got some of the plot points. The true ending is quite vague and open to many interpretations, like Cross Channel or inception.

I was pretty worried about the art, since the art of Real Imouto was pretty bad. But, from the looks of things, this is one artist that got worse as time went by, so the art isn’t that bad. Of course, it helps that the CG budget for this is a lot higher than that of Real Imouto.
Kohaku looks so inconsistent throughout the game that I can’t help but think that there were two different artists who worked on her.

Sound:
There aren’t many pieces of BGM, and I think only one vocal song, which is the opening. It’s overall of a pretty nice quality, and the number of pieces is enough for a game this short. The voice acting wasn’t bad.

Kohaku Translations is hosting their own download link to get this translation patch, get it here

Visit the Fuwanovel Page to get the full game