Localized by Atlus. From Shacknews:

“Continuing its fine tradition of ferreting out Japanese curios for North American releases, publisher Atlus has announced it’s bringing Examu’s 2D fighting game AquaPazza to PS3. It’s a port of an arcade game based upon visual novels, which results in an eclectic cast ranging from bookshelf-throwing schoolgirls to actual warriors.

AquaPazza has 13 playable characters from various Aquaplus visual novels, plus another 13 partners who can throw in assist attacks. It’s based on the latest version of the arcade game, which includes extra characters and tweaks to make it fit for "tournament-level competition." While Atlus is localizing the game, it’s leaving the Japanese voices intact.

It has characters from Utawarerumono, Tears to Tiara, To Heart 1&2, Kizuato, Routes, Comic Party, White Album. There’s a full list of ‘playable’ characters on wikipedia here, except, they are not all playable characters. E.g. Ogata Rina is just a support character. 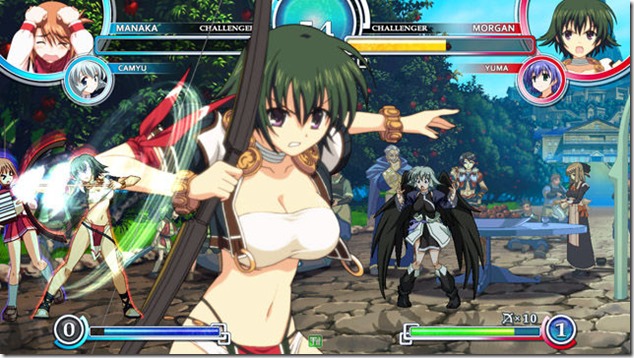