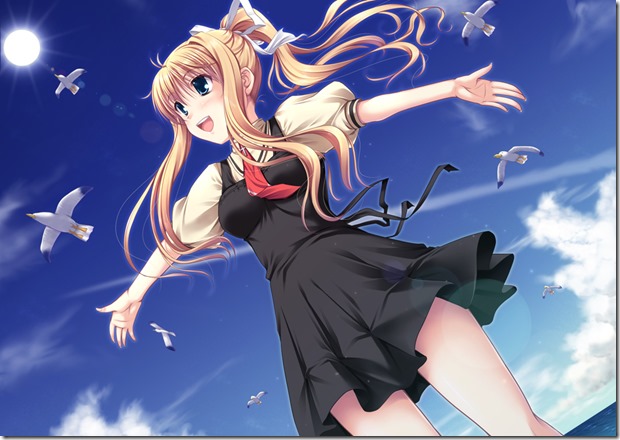 Aozaki: “Lately there has been a lot of rumors going around saying that were using Machine translated scripts and that we shouldn’t release a game with 40% MT’s and such…I’ve been saying this and I’ll say it 100 more times if I have to. There are no machine translations in our scripts. Even in the old existing ones.” [quoted from gaogaotranslation.wordpress.com]

^ Old existing ones are the human translations left off by past team.

d_fallen_god: “Hope this clears up the confusion. We reached 100% of the translation of Air, 60% translated by Aozaki and cowteats while 40% are from the old scripts (inherited from past project). Hopefully we might fix the 40% and then that’s it.” [quoted from vnsociety.wordpress.com]

Personally I feel there’s no need to bother clarifying it to that extent. The people who are into this culture of slandering other’s work with no evidential basis (e.g. tlwiki), and then those idiots who (want to) fall prey to other people’s entertainment, these are intentionally malicious people who just love to see your project fail (or they are idiots who believe anything they are told). They are a tiny fraction of the full VN playing audience. If they hang at /jp/ and got lied to because of it, and they miss out on the game, then that is excellent news! Firstly no one translates for these people, and secondly I can personally assure you that the publishing platform is much much bigger now. There is no need to rely on the readership of these 4chan-like communities, so don’t feel threatened by it.

Regarding why there are two translation projects
Aozaki: Once we made the decision we were going seriously do a full translation of Air we started to explore our options. Our no.1 choice was to go to Sheeta and ask to team up. Now I would like to point out I have absolutely nothing against Sheeta and Ixrec (Think that’s his name…). My encounters with them have always been kinda negative. When I asked Sheeta if she would like to team up she quickly refused and told me that she was working on this project and asked me to stop… While I was happy that someone was working on this project I myself and cowteats both felt like we should continue. We have both watched a lot of groups start, stall, and drop this project so we both felt like we should keep going… [see full article]

Anyway, whenever the first beta patch comes out, you can choose to read it (knowing that parts of it is not fully edited yet), or you can wait for the final patch to experience the real thing.